Nazi-looted painting back in Paris; display will alternate with University of Oklahoma museum 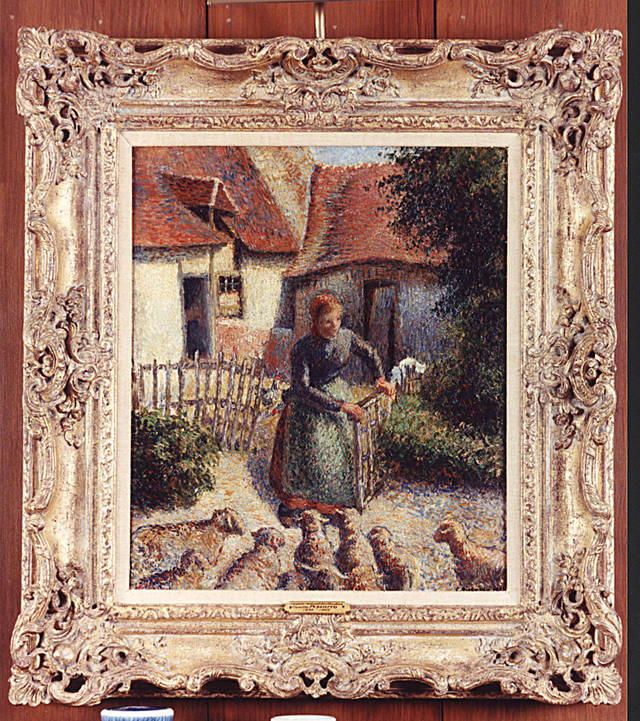 The Camille Pissarro painting "Shepherdess Bringing in Sheep" will soon go on display at the Musee d'Orsay art museum in Paris.

NORMAN — The University of Oklahoma has completed the physical transfer of the Nazi-looted painting “Shepherdess Bringing in Sheep” to the Musee d'Orsay in Paris where it will soon go on display for the next five years, OU officials have confirmed.

"The process of reaching a mutual agreement for the public display of Camille Pissarro's 'La Bergere reentrant des moutons' has been very complex," University of Oklahoma President David Boren said Tuesday, referring to the 1886 painting by its French name. "Decisions made on behalf of the university throughout this detailed process have maintained great sensitivity to the history behind the painting as well as the families involved."

The painting will be on view at the French museum for five years and then will be displayed in alternating three-year intervals at the Fred Jones Jr. Museum of Art in Norman and a museum in France.

The rotating display arrangement was worked out as part of a settlement agreement between OU and Leone Meyer, the adopted daughter of Jewish businessman and art collector Raoul Meyer.

Nazi soldiers stole Raoul Meyer's extensive art collection, which included the painting, during the German occupation of Paris in World War II. The theft was part of a looting campaign that stretched across Europe.

After the war, the painting changed hands several times, eventually coming to OU in 2000 as part of a collection bequeathed to the Fred Jones Jr. Museum of Art by Clara Weitzenhoffer, the widow of Oklahoma oilman Aaron Weitzenhoffer.

"Leone Meyer is pleased that the painting will be put on public display in France, so that the public may see the painting and, more importantly, learn about its history," her attorney, Pierre Ciric, said in a prepared statement Tuesday.

Boren said he was pleased with terms of the settlement. "The university acknowledges the unique past of this painting and believes a fair and just resolution among all parties has been reached."

As part of the settlement, a label describing what is known of the painting's history will accompany it during future displays.

"We are particularly glad that both fine families involved in the case are being appropriately recognized, the Meyers who tragically lost the painting to Nazi theft and the Weitzenhoffer family who bought the painting in good faith and generously sought to share it with the people of Oklahoma," Boren said. "The history of the Pissarro painting and the families involved will continue to be honored, and the painting will remain accessible for the benefit of the public.

"This resolution of a difficult issue should be the cause of positive comment from all of those involved. The university has done its best to meet its obligations as a steward of the artwork and the gift."