The descendants of German-Jewish lawmaker Ludwig Marum want the Bird's Head Haggadah to remain on display at the museum, but seek financial compensation and wants the museum to rename it the Marum Haggadah, after their grandfather 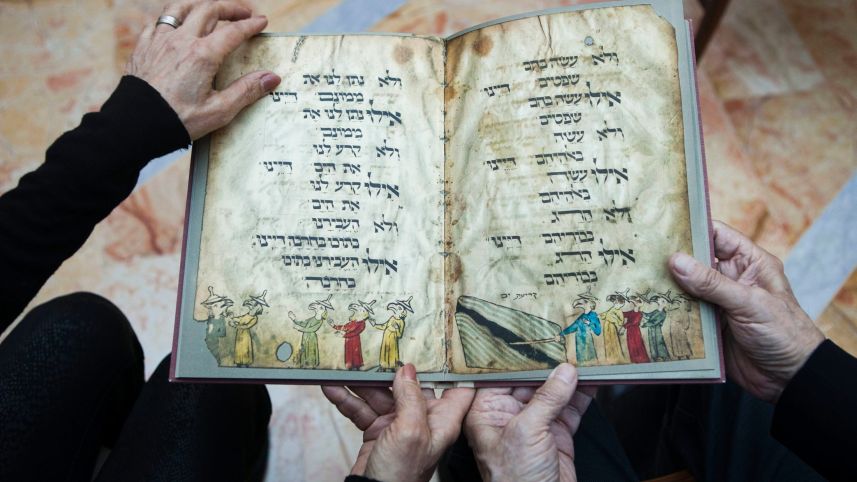 The grandchildren of a prominent Jewish victim of the Nazis are renewing their fight for title to the world's oldest illustrated Passover manuscript, hoping newly-unearthed documents will boost their claim to a prized jewel of Israel's leading museum.

They say the Haggadah was snatched from their grandfather's family after he was rounded up by the Nazis and later sold to the predecessor of the Israel Museum in Jerusalem without their consent.

One of the grandsons, 75-year-old Eli Barzilai, said he met with the museum last May and has corresponded with it since.

The museum acknowledges the Bird's Head Haggadah was in the family's possession before the Nazi epoch, but has asked the family to offer documentation about what happened to the Haggadah from the time the Nazis arrested their grandfather in 1933 until an unrelated Jewish man from Germany arrived in Jerusalem and sold the Haggadah in 1946.

The family has no written proof that the manuscript was stolen. But over the last few months, Barzilai has acquired documentation from a German archive he says proves that Hermann Kahn, the man who sold the Haggadah, did not have the financial means to purchase it in the first place — lending support to the possibility that he obtained it illegitimately.

"Hermann Kahn could not have been able to buy the Haggadah ... because of unending financial difficulty," Barzilai said in an interview in his Jerusalem home.

The family's lawyer in Israel, Meir Heller, says the relevant archival documentation will be presented to the Israel Museum.

The family wants the Bird's Head Haggadah to remain on display at the museum, but seeks financial compensation and wants the museum to rename it the Marum Haggadah, after their grandfather, Ludwig Marum.

"It will be a shame if we have to go to court," said Heller. "An injustice has been done, and the museum must correct that injustice."

The museum says it is open to receiving new information on the Haggadah's ownership history and continuing discussions with Barzilai, but considers the ownership matter to have been resolved in 1984. At that time, Marum's daughter wrote the museum that she believed the immigrant who had brought the Haggadah to Jerusalem "had no right to sell it," but that the family wanted it to remain at the museum "for the benefit of the public."

Written in southern Germany around 1300, the Bird's Head Haggadah has long been a riddle, largely because of its strange illustrations of Jewish figures.

Marc Michael Epstein, an expert on the manuscript, believes the figures have the heads of griffins, a beloved mythical creature, offering a positive representation of Jews while skirting a biblical prohibition against depicting human likenesses.

Marum, a Jewish lawyer from the southern German town of Karlsruhe who served in Germany's parliament and was an opponent of Hitler, received the Haggadah as a wedding gift, according to his family. In 1933, the Nazis paraded Marum and other opponents across town before taking them away, and Marum was later killed at the Kislau concentration camp.

In 1946, a Jewish lawyer named Shimon Jeselsohn, who worked with Marum in Karlsruhe and fled to Jerusalem after World War II, read in the newspaper about a special Haggadah purchased by the Bezalel National Museum, the forerunner to the Israel Museum. He recognized it from Marum's law office and was curious how it ended up in Jerusalem.

Kahn told Jeselsohn a Jewish doctor had given it to him, but the doctor denied it, and when Kahn offered no further explanation, Jeselsohn became suspicious. He tracked down Marum's daughter to notify her. Over the years, Jeselsohn, now deceased, continued to encourage the family to seek an arrangement with the museum.

The family had no further information about Kahn until late December 2016, when German historians in Karlsruhe mailed more than 1,000 photocopied documents to Barzilai, including files pertaining to Kahn's correspondences with German authorities.

Barzilai said the documents reveal that Kahn, a schoolteacher, was low on cash. He made multiple requests for funds from the German authorities to help him pay for his ill wife's medical treatment, and at one point apparently paid his apartment rent in dining room furniture.

Like other Jews, Kahn was fired from his teaching job, the documents show, and he took a low-paying, part-time job teaching drawing classes at a Jewish school — during which time Barzilai thinks Kahn may have obtained the Haggadah.

In 1939, Nazi officials offered Kahn a chance to leave Germany, and with financial support from his brother-in-law, Kahn shipped his household items to what was then British-ruled Palestine.

According to one document, neighbors reported seeing Kahn hiding valuables in the upholstery of the sofas he was packing up. Barzilai believes this is a clue that the Haggadah was in that shipment.

While Kahn was en route to Palestine, World War II broke out and he got stuck in Switzerland. He arrived in Jerusalem in 1945, retrieved his belongings from storage, and sold the Haggadah a year later.

Barzilai does not think Kahn himself stole the Haggadah, but that he may have gotten it from someone else after Nazis arrested his grandfather.

The Haggadah is at the root of an uncomfortable battle pitting a Jewish family against Israel's leading museum, which considers itself a caretaker of heirless Judaica once owned by Holocaust victims.

Another sore spot is that David Jeselsohn, the son of the lawyer who advocated for the family's rights to the Haggadah, is a leading donor of the Israel Museum and has encouraged Barzilai to drop the case.

"Because of all the past, and my father ... I am always ready to meet (Barzilai) and ready to help him," David Jeselsohn said in a telephone interview from Switzerland, where he has a home. "But if he wants facts to be changed, he must come up with new facts."

Barzilai said he hopes Jeselsohn will help reach an agreement acceptable to all sides.

Jeselsohn's father "did so much for this case," he said. "We would like the Jeselsohn family to continue the father's path."