A court ruled against Germany's effort to dismiss the case. 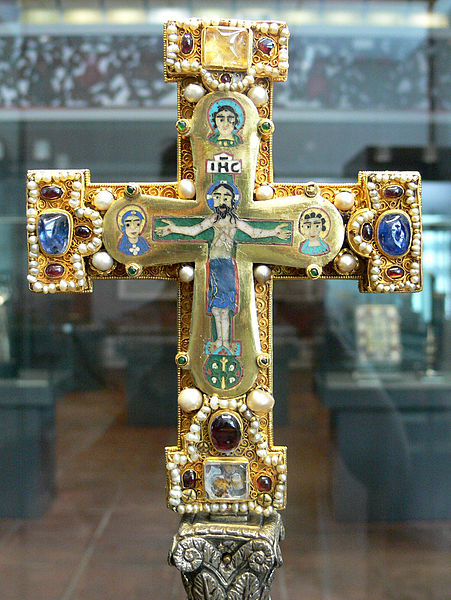 A Guelph Treasure Crucifix, currently on display at the Bode Museum, Berlin.

The claimants to a collection of medieval ecclesiastical treasure valued at $276 million known as the Guelph Treasure have defeated Germany’s effort to dismiss the case by invoking the Foreign Sovereign Immunities Act. The heirs of a Nazi-era consortium of Jewish art dealers claim their ancestors were forced to sell the trove under duress.They can now make that case in a United States courtroom.

“This is the first time in US history that Germany will have to defend itself in a US court against Nazi-looted art claims,” Nicholas M. O’Donnell told artnet News in an email.

The 82-piece collection was bought in 1929 for 7.5 million Reichsmark by a group of Jewish dealers consisting of Zacharias Hackenbroch, Isaac Rosenbaum, Saemy Rosenberg, and Julius Falk Goldschmidt. The dealers’ plan to flip the treasures was quashed by the onset of the great depression. However, the four men managed to sell about half of the works for 2.5 million Reichsmark, and in 1935 they sold the remaining pieces to the Prussian state for 4.25 million Reichsmark, a loss of 10 percent on their initial investment. The Minister President of Prussia, Hermann Göring, the second-most powerful man in Nazi Germany later presented the treasure to Adolf Hitler as a gift.

Only months after the sale, the repression of Jews under Nazi rule intensified following the passage of the Nuremberg Laws, and three of the four members of the consortium fled the country. Today the treasures remain on view at Berlin’s Bode Museum.

“We are pleased that the Court agreed that a forced sale for an inadequate sum to agents of Hermann Goering enjoys no immunity from justice,” O’Donnell said in a statement. “The facts show beyond all doubt that the 1935 ‘sale’ was nothing more than a sham transaction that was part of the regime of institutional oppression of our clients’ ancestors by Nazis at the very highest level.”

The Washington, DC District Court struck down the German defendants distinction about whether Jews were oppressed by their own government or by international actors as no defense against restitution claims. The court also rejected the German defendants argument that the non-binding German restitution advisory committee—which adjudicates resolutions claims in Germany—bars litigation is US court. And lastly the District Court accepted its responsibility to resolve complex cases of domestic and foreign law.

The ruling means that the claimants may now litigate their claims for the property’s rightful return, opening the next chapter in a case that’s already lasted over eight years.