The deliberate destruction of cultural heritage sites may amount to war crimes, a new resolution adopted by the UN Security Council says. Officials have warned of "cultural cleansing" in the Middle East, Asia and Africa. 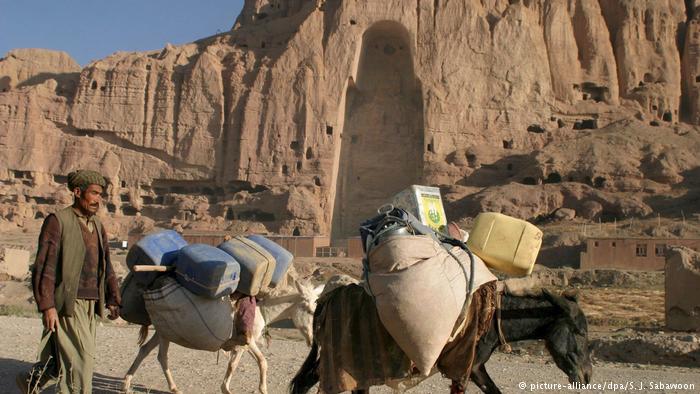 The UN Security Council on Friday passed a resolution strengthening the protection of global cultural heritage sites threatened by conflicts, saying perpetrators could be prosecuted for war crimes.

The resolution urges nations to increase efforts to preserve historic monuments and sites in conflict zones. The onset of the 21st century witnessed attacks against global heritage sites increase significantly, including the destruction of the Bamiyan Buddhas in Afghanistan and Timbuktu's ancient shrines in Mali.

Previous efforts by the Council to safeguard cultural heritage focused on the illicit trafficking of looted cultural relics to fund terrorist activities in Iraq and Syria, where the "Islamic State" militant group destroyed UNESCO World Heritage sites, including Roman ruins at Palmyra.

However, Friday's resolution called for further international cooperation in investigations and prosecutions of individuals and groups committing attacks against cultural heritage sites, monuments and relics.

The resolution affirmed that "directing unlawful attacks against sites and buildings dedicated to religion, education, art, science or charitable purposes, or historic monuments may constitute, under certain circumstances and pursuant to international law, a war crime and that perpetrators of such attacks must be brought to justice."

UNESCO Director Irina Bokova described the resolution as "historic," saying it reflected the "recognition of the importance of cultural heritage for peace and security."

"Heritage is identity - it is belonging," Bokova told the Council after the resolution passed. "The deliberate destruction of heritage is a war crime - it has become a tactic of war, in a global strategy of cultural cleansing."

The resolution comes after the International Criminal Court in The Hague last year sentenced a Malian jihadist for the destruction of shrines and a mosque in the fabled city of Timbuktu.

On Monday, several countries, including France and Saudi Arabia, pledged $75.5 million for the protection of cultural heritage sites threatened by conflicts and terrorist attacks.

At the donor conference held in the Louvre museum in Paris, French President Francois Hollande said the destruction of cultural heritage added to the persecution of populations in conflict zones in the Middle East, Asia and Africa.

"[It's] the same objective: to break what was there before in order to kill hope afterwards, to eradicate human and cultural diversity," he said, vowing to raise $100 million for the protection of heritage sites by 2019.