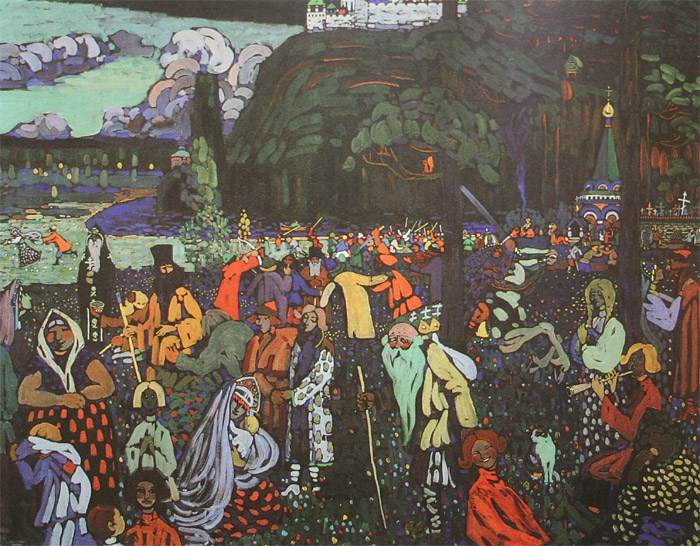 The 1907 Wassily Kandinsky painting “Das Bunte Leben.”
The title is German for “The Colorful Life.”

MANHATTAN (CN) – The German bank Bayerische Landesbank faces a federal complaint from the heirs of a Dutch art collector demanding of a Kandinsky painting they say that Nazis looted during the Holocaust.

Calling for at least $80 million in damages, Robert Lewenstein and two others say they are the living heirs of Dutch sewing machine manufacturer Hedwig Lewenstein-Weyermann and the true owners of the 1907 Wassily Kandinsky painting “Das Bunte Leben.”

German for “The Colorful Life,” the tempera-on-canvas painting by Wassily Kandinsky is on permanent loan to the Lenbachhaus museum in Munich, Germany.

Lewenstein’s March 3 complaint says Bayerische Landesbank “unlawfully obtained the painting by purporting to ‘purchase’ it from an individual whom it knew or should have known had no right to convey ownership.”

Before Hedwig Lewenstein-Weyermann died in 1937, according to the complaint, her last will and testament left “Das Bunte Leben” and the rest of her substantial collection to her two surviving children, Robert Gotschalk Lewenstein and Wilhelmine Helena Lewenstein.

The heirs say that Hedwig Lewenstein-Weyermann had loaned the Kandinsky to the Stedelijk Museum in Amsterdam a few years before her death in 1933.

In 1940, following the Nazi invasion and occupation of the Netherlands, “Das Bunte Leben” was among those looted from the Stedelijk and then hastily auctioned off by Frederik Muller & Co.

The heirs say it fetched a mere 250 Dutch guilders, roughly 10 to 20 percent of its then market value.

Nazi art-looting agency the Dienststelle Mühlmann was established in the Netherlands at the time, according to the complaint, to find art it could sell to Hermann Göring and Nazi leader Adolf Hitler.

Lewenstein says Frederik Muller & Co. was known to have collaborated with the Nazis and organized auctions of art and possessions looted from Jews, similar to the “Judenauktionen” in Germany and Austria.

The lawsuit says Guidotti is the only heir of Irma Klein, Robert Gotschalk Lewenstein’s first wife prior to the despoilment, whose financial interest in the “Das Bunte Leben” was derived through then existing community property laws.

While both Robert and Wilhelmine Lewenstein fled the Netherlands and never returned, Nazis seized the family’s sewing-machine company and murdered the family members who stayed in the country.

The complaint says Bayerische Landesbank claims to have bought the painting in 1972 from Johanna Slijper for 900,000 Dutch guilders.

Bayerische Landesbank officially presented the painting to the Lenbachhaus on Dec. 14, 1973, as a permanent loan by the bank to the museum.

Lewenstein and the other heirs sent a letter on Nov. 5, 2015, demanding the return of the painting from Bayerische Landesbank.

The heirs call the bank’s refusal to return the painting a violation Washington Principles and the Terezin Declaration, which set principles regarding Nazi-looted artwork.

Bayerische Landesbank is accused in the 23-page lawsuit of counts of replevin, conversion, taking and detention, unjust enrichment and constructive trust.

The plaintiffs are represented by Geri Krauss of Krauss PLLC in New York City.

Representatives from Bayerische Landesbank did not immediately respond to requests for comment Monday afternoon.