Heirs Sue for Return of a Kandinsky, Saying It Was Looted by Nazis 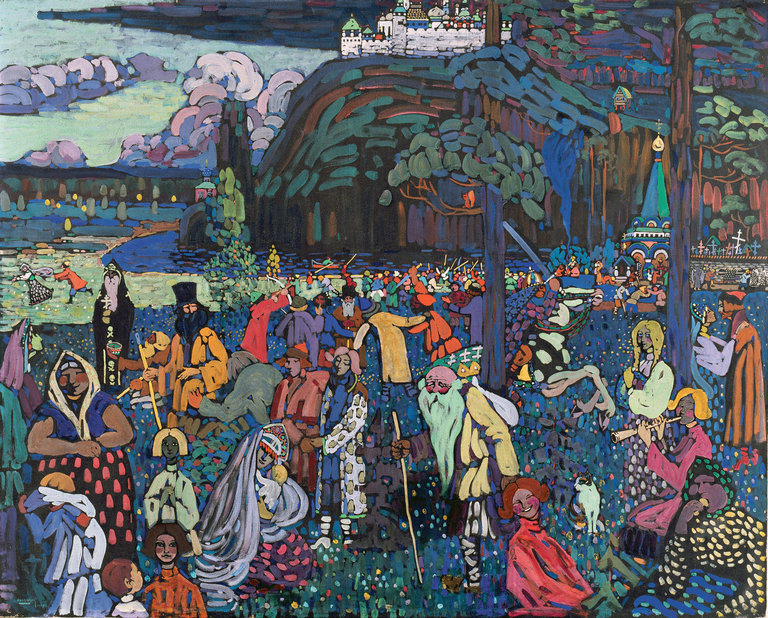 For more than 40 years, “Colorful Life,” an important painting by Wassily Kandinsky, has hung in Städtische Galerie im Lenbachhaus, a Munich museum where visitors have been able to appreciate the swirl of colors in a work that many experts view as a marker in this renowned Russian artist’s development from figuration to abstraction.

But a lawsuit filed on Friday in Federal District Court in Manhattan is demanding that the painting be returned to the heirs of a Jewish family who, the suit says, owned the painting before the Nazi invasion of the Netherlands in 1940.

The work, created in 1907, was bought in 1972 by a bank based in Munich, Bayerische Landesbank (BayernLB), which then lent it to the museum.

Three heirs to the Dutch Jewish family say the work had been left in the 1930s for safekeeping with a museum in the Netherlands but was then pilfered and sold without permission.

“The painting was taken from its legitimate owners in 1940 in violation of international law during the period of the Nazi occupation in the Netherlands in furtherance of the Nazi campaign of Jewish genocide,” said the complaint, which was filed in New York because the bank also does business in Manhattan.

The bank said it had not reviewed a copy of the lawsuit yet but said in a statement that it had acquired the painting legally. Bank officials said they had written to the claimants last year offering to take part in a binding review by the Limbach Commission (charged by Germany’s federal, state and local governments with helping to return art looted by the Nazis), and had not received a response.

In the event of the claimants’ being awarded the painting, the statement said, “BayernLB has expressed its desire that the painting remain on public display at the Lenbachhaus rather than be taken away.”

But the heirs said, through their representatives, that they had not seen the point of going before the commission because the bank had stipulated in July that the painting would have to remain at the museum regardless of any outcome. James Palmer, the founder of the Mondex Corporation, an art recovery company which contacted the heirs in this case, said they believed that the bank was declining to offer any restitution.

A spokesman for the bank, Matthias Lücke, said it was important to keep the painting in the public domain, in part because of Kandinsky’s relationship to Munich, where he had painted. He noted that the painting had originally been purchased at the urging of the city and the Lenbachhaus museum.

The heirs are descendants of Robert Gotschalk Lewenstein and his sister Wilhelmine Helena Lewenstein, according to the complaint. In 1938, the complaint says, the family gave custody of the painting to the Stedelijk Museum in Amsterdam, before fleeing, Wilhelmine to Mozambique and Robert to France, and eventually the United States.

The complaint does not establish a direct connection between the painting and Nazi forces but says that a few months after the invasion, a Dutch art dealer took possession of the painting without permission from the Lewensteins and that it was then auctioned in October 1940 alongside items brought to market by a German businessman named Alois Miedl. Those works included pieces from the collection of Jacques Goudstikker, a Jewish Dutch collector. In 2006, the Dutch government announced that it would return to Mr. Goudstikker’s heirs more than 200 old master paintings that had been obtained in July 1940 by the Nazi leader Hermann Göring and his dealer, Mr. Miedl.

BayernLB has said that it bought the painting in 1972 from Mr. Slijper’s widow, according to the court papers. The heirs assert that the bank should have known that there was a chance the work had been stolen, saying in the complaint: “The acquisition of the painting was handled by the Lenbachhaus, which had the expertise to investigate the provenance of the painting and to determine whether the painting was or was likely to have been looted by the Nazis.”

The painting was exhibited at the Solomon R. Guggenheim Museum for about four months in 2009 and 2010.