Three artworks which were looted by Nazis during the occupation of Poland during WWII have been returned to Kraków. 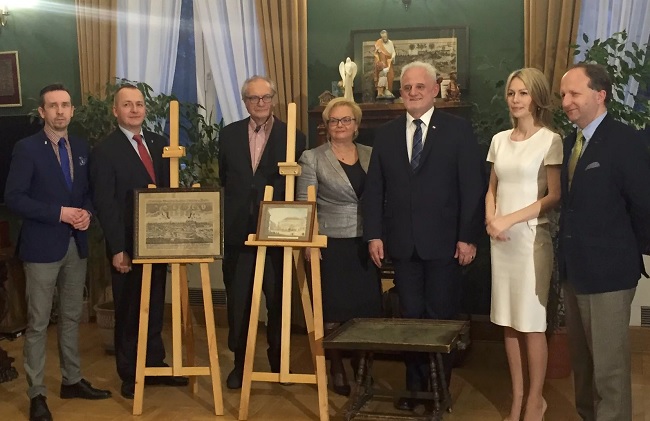 The handover ceremony on Sunday.

The artworks – a map of 17th century Poland, an engraving of Kraków during the Renaissance, as well of a painting of the city's Potocki Palace – were taken in late 1939 by the wife of SS Gruppenführer Otto Wächter, who had recently been appointed Nazi governor of Kraków.

In a ceremony on Sunday, the stolen works of art were returned by the couple's son, Horst Wächter. Poland has for decades been trying to regain some half a million works stolen by the Nazi German occupiers between 1939 and 1945.

The handover was made possible due to research by historian and former presidential candidate Magdalena Ogórek, who had been in touch with the family for many months.

The Rzeczpospolita daily reported that Ogórek had seen one of the prints in a picture accompanying a story about the Wächter family in the Financial Times. She then contacted the family to try and get the works back to Poland.

Although there are thousands of works still at large, events such as these are very rare.

“This is probably the first time that the member of a family of one of the most important Nazi occupiers is giving back art that was stolen from Poland during the war,” Ryszard Czarnecki, a Polish MEP and vice-president of the European parliament, was quoted as saying by the UK's The Guardian.