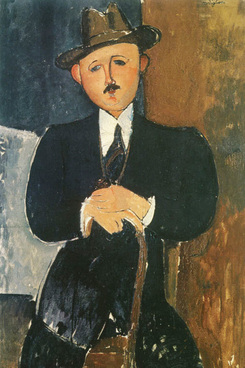 An art holding company has been frustrated in its bid to block an heir from recovering a painting allegedly looted by the Nazis from his grandfather by a Manhattan appeals court.

The estate of Oscar Stettiner, a Jewish art collector living in France before the rise of the Third Reich, says that in 1930, Stettiner purchased Amedeo Modigliani's "Seated Man With a Cane." The painting was taken by the Nazis, the estate claimed, after Stettiner fled his home in Paris in 1939.

In 1996, the International Arts Center allegedly bought the painting at auction for $3.2 million.

George Gowen, an attorney for Philippe Maestracci, Stettiner's grandson and sole heir, in 2013 began litigation in Manhattan for the painting's return.

In 2015, Manhattan Surrogate Nora Anderson denied a motion by the IAC aimed at ending the litigation. And on Tuesday, a unanimous panel of the Appellate Division, First Department, affirmed the decision.

Justice Peter Tom, writing for the court, rejected the art center's claim that New York lacked jurisdiction since the IAC is based in Panama. Tom said New York courts' reach extends to nonresidents doing business in the state.

Phillip Landrigan, a partner at the White Plains-based McCarthy Fingar, appeared for the estate.

"We've taken down one of what I anticipate to be several obstacles and I hope they see clear to return this painting to its rightful owner," Landrigan said in an interview.

Nehemiah Glanc of Aaron Richard Golub appeared for the IAC.

In an interview, Golub said there is "no proof whatsoever" that Stettiner's estate owns the painting.

"The factual contentions, we think, are completely in error," he said.