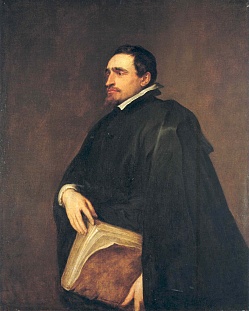 Dr Oetker, a family-owned German manufacturer of muesli, pizza and cake mixes, says it will return a portrait by Anthony van Dyck acquired by Hermann Göring to the heir of Jacques Goudstikker, a Jewish art dealer forced to flee the Netherlands when the Nazis invaded.

The Portrait of Adriaen Hendriksz Moens was among the works in Goudstikker’s gallery inventory when the family fled in 1940. It was forcibly sold and acquired by Göring, the founder of the Gestapo and the commander of the Luftwaffe.

After the war it was returned to the Dutch government, which sold it to a London-based Old Masters dealer. It was purchased in London in 1956 by Rudolf August Oetker, the owner and chief executive of Dr Oetker, who died in 2007.

Dr Oetker announced last year that it had hired a provenance researcher to investigate the company art collection, which encompasses silver and gold antiques, porcelain and several hundred paintings. The research work began in early 2015 and is expected to continue until the end of 2017 at the earliest.

“It is heartening to see private collections like the Oetker collection do the right thing for victims of the Nazis and their families,” says Marei von Saher, the widow of Goudstikker’s son and the dealer’s sole heir. “I hope that the restitution of this artwork will lead other private collections to act just as responsibly.”

The painting is the second that Dr Oetker has returned this year. The first, Springtime in the Mountains by Hans Thoma, had disappeared in a forced sale in Frankfurt in 1938. In addition to the two works already returned, the company has identified two more candidates for restitution.