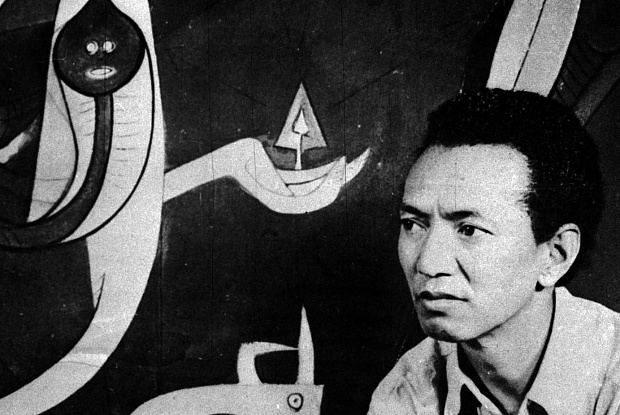 Wifredo Lam with one of his paintings in Havana in 1963. Although he supported Fidel Castro, the Cuban government seized works from the artist’s studio

A painting that the heirs of a Cuban collector maintain was looted after the 1959 revolution is now on sale for the second time in Miami after a restitution case was settled quietly this summer, The Art Newspaper has learned. The heirs of the original owner of a mural-sized canvas by Wifredo Lam (1902-82) received undisclosed compensation from the current holder of the work in an out-of-court settlement.

The painting, Sin Titulo (Suenos Arcabes), or Untitled, which Lam painted in 1955, first surfaced on the market when it was offered for sale in Miami in late 2015. It is on sale in the city again through the same gallery, Cernuda Arte. The dealer, Ramón Cernuda, a Cuban exile, would not discuss the painting’s price, but it is said to be more than $2m.

Cuba has been a steady source of pictures by the Afro-Asian Cuban artist. Most of those works are forgeries, says Lam’s son, Eskil Lam, who heads the Association of Friends of Wifredo Lam in Paris, which provides certificates of authenticity. As for Sin Titulo (Suenos Arcabes), Lam says: “This painting is genuine.” He adds that he does not expect the death of Fidel Castro to reduce the flow of real or forged Lams out of Cuba.

The collector, Rene Diaz de Villegas, left Cuba after Castro seized power. He had bought the work from Lam soon after it was painted. The heirs of Diaz de Villegas, who live in Miami, argue that the painting was seized by the Cuban government without the owner’s permission in 1960 and never returned. They informed the Art Loss Register of the painting’s disappearance.

Sin Titulo resurfaced just before the opening of the 2015 edition of Art Miami, when Cernuda placed a full-page advertisement in the Miami Herald, announcing that the painting would be on his stand at the fair. The collector’s heirs saw the newspaper advertisement and informed Cernuda Arte that Diaz de Villegas owned the painting when Castro seized power and had never willingly relinquished title to it. A letter to the gallery from the heirs includes a photograph of the painting hanging in the family’s dining room in Cuba in October 1959.

The painting had been consigned by Fernando Ruiz Pinilla, a Spanish citizen. His lawyers maintain that the Diaz de Villegas family, before leaving the island, donated the work to the Franciscan order and the monastery of San Antonio de Padua in Havana, which falls under the governance of the Spanish Franciscans. They added that the painting had remained with the Franciscans in Havana until it was sold in 1996 to fund building improvements at the monastery, including a lift for ageing monks.

Ruiz Pinilla sued the Diaz de Villegas heirs in a US court to have the latter’s claim to title dismissed. The heirs counterclaimed for restitution of the painting. The documents filed with the court comprise most of the information that has been made public about the painting and the dispute. The settlement includes a confidentiality agreement between the parties.

In the court papers are affidavits from two Franciscan monks, stating that the picture was donated by Diaz de Villegas and stored at the monastery. Ruiz Pinilla’s lawyers say: “The exact date of the donation is unknown because the original books and records of the monastery were destroyed after Fidel Castro declared the Cuban Revolution communist and expelled 80 of the 104 priests and abbots in the early 1960s.” The monks added that a reconstruction of the archives confirmed that the painting was a donation.

In 1996, according to the Ruiz Pinilla filings, the monks sold the work to Juan Carlos Izquierdo of Barcelona, who in turn sold it to Ruiz Pinilla in Spain a year later. Lawyers for Ruiz Pinilla said that the claim for the return of the painting, addressed to the Miami gallery, was a “slander of title” that would make the picture hard to sell.

Although art seized from Cuban collectors and their homes has turned up outside Cuba since the early 1960s, Cernuda says: “There has never been a decision by a US court regarding Cuban art that favours claimants.” The Lam settlement was reached before a court could rule on the case.

“Anyone considering a work by Wifredo Lam with provenance from Cuba should be extremely wary,” warns Eskil Lam, who adds that the flow of the artist’s works, as well as fakes, has been “constant”. Relations between Cuba and the Lam family were damaged when the Cuban government seized the contents of Lam’s studio in Havana. The Lam family still regards those works as its property. “We are trying to find a solution, trying to have conversations with them. It’s difficult,” Eskil Lam says.

Wary of claims from the family, Cuba lent no works to the touring Lam exhibition now at Tate Modern (until 8 January), which was co-organised by the Pompidou Centre in Paris and the Museo Reina Sofía in Madrid.