When the news about the Munich art find in Cornelius Gurlitt’s apartment broke, a legal issue that so far had been of interest only to a small community of lawyers or legal scholars gained prominence: the application of the statute of limitation to restitution claims for looted art. As the law stood, restitution claims against Gurlitt would, in all likelihood, have become time-barred. When the Gurlitt case made headlines worldwide, all of a sudden, politicians paid attention to that rather esoteric question. The newly appointed Bavarian Minister of Justice even initiated legislation to deal with the issue. But the topic disappeared from the political stage as quickly as it had made its appearance when it became clear that Cornelius Gurlitt was not going to invoke the limitation defence. The Bavarian law-making initiative fell into oblivion.

A recent decision by the District Court (Landgericht) Frankfurt shows that the underlying issues remain of relevance, and if the law has to be changed, it is for parliament to do so. 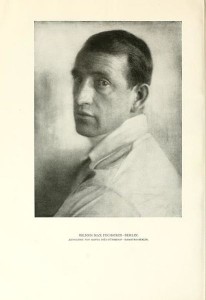 The facts of the Frankfurt case, in a nutshell, were as follows: The heir of Robert Graetz brought a claim against the current owner of a Max Pechstein painting, depicting surveys with flowers dated 1918. Robert Graetz was a Jewish textile manufacturer and art collector. He he was deported from Berlin to the Warsaw ghetto in April 1942 and subsequently murdered in Auschwitz. The claimant believed the predecessors of the defendant had acquired the artwork in 1940/1941, when the Graetz family were forced to sell their villa in Berlin’s elegant Grunewald neighbourhood and most of their art collection, and to move into a Judenhaus prior to their deportation.

The defendant challenged the alleged provenance of the painting, and invoked the limitation defence. With respect to the stated of limitation, she argued that the 30 year limitation period relating to ownership under the old provisions of the German Civil Code would have expired in 1972, and that claims under Section 1007 German Civil Code (Bürgerliches Gesetzbuch, BGB) relating to possession would have become time-barred at the latest in 1997.

The Frankfurt court found that it had not to take evidence and establish the exact provenance of the painting, since even if claimant were successful in establishing that he had a claim to the painting, the limitation defence would be successful.

Whether you like the outcome or not, from a policy perspective, the court’s decision correctly applies the law as it stands, and as one would have expected. It is a carefully argued decision which starts by setting out that between the parties, only the provisions of the German Civil Code apply. In particular, there is no room for an (indirect) application of the Washington Principles.

Once the court has established that, in principle, any claims, if they can be proven, would have become time-barred, it discusses the question whether the defendant would be acting in bad faith by invoking the limitation defence, and hence in violation of Section 242 German Civil Code. In line with previous case law, the court finds that in the circumstances of the present case, the defendant was perfectly entitled to invoke the limitation defence.

First, the court distinguishes the decision of the Federal Supreme Court in the Hans Sachs case, where the court had allowed a restitution claim to succeed against the German Historical Museum (Deutsches Historisches Museum) which had not been brought until 2006 (see here for a discussion of that case).

Secondly, the court then discusses whether the statutory provisions on limitation must be construed narrowly (teleologische Reduktion), because a literal application of the provision would fail to implement the true intent of the lawmakers. The court finds that the requirements for such a narrow construction are not met. In particular, it held that that avenue is not open to the court because the German parliament was aware of the impact of the limitation provisions on looted art, when in 2001 it implemented a reform of the German Civil Code and deliberately choose not to address the issue. The fact that neither interventions in the 2001 legislative process nor the more recent 2014 Bavarian initiative mentioned above led to parliament changing its mind – and subsequently changing  the law –  meant that the court was bound by the statutory provisions as they currently stand.

In short, this case shows that the issues that were hotly debated – and extensively covered on this blog (see here and here, for example) – at the height of the Gurlitt saga remain relevant. With the public attention having shifted away from the topic, with 2017 being an election year and the present parliament coming to an end, I very much doubt that we will see a change of the law any time soon. Unless the law changes, however, the current owners of looted art can successfully invoke the limitation defence in all but the most unusual circumstances.