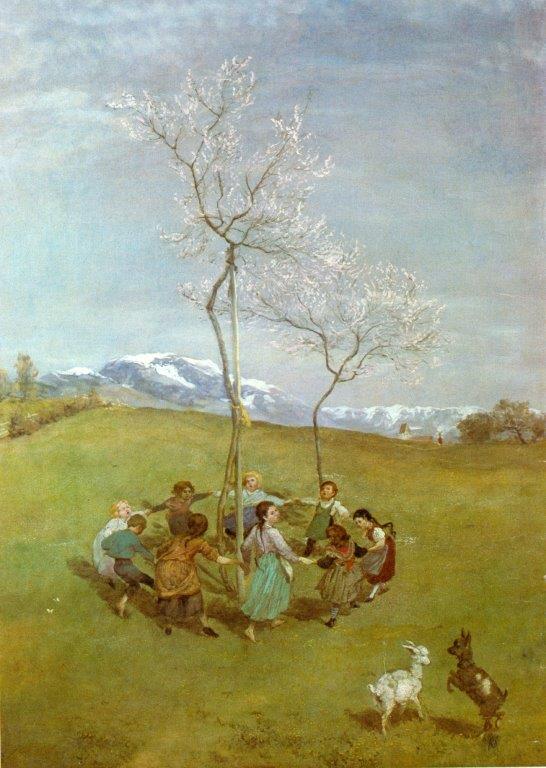 The German food processing company Dr. Oetker will restitute a Nazi-looted painting from its corporate art collection to the heirs of the previous Jewish owners, the firm announced on Tuesday.

The painting is one of four works from the Dr. Oetker collection identified by company appointed provenance researchers as possible Nazi-looted art, Monopol reported. According to company spokesman Jörg Schillinger, the three additional suspected works were identified in an internal audit of its holdings, which will also be subject to restitution in the near future.

Frühling im Gebirge/Kinderreigen by Hans Thoma was acquired by the Jewish collector couple Albert and Hedwig Ullmann when they bought the Villa Gerlach estate in Frankfurt am Main at the end of the 19th century, in a deal that included the property’s inventory of artworks. Following her husband’s death in 1912, Hedwig Ullmann was forced to sell her art collection under duress amid the Nazi persecution of Jews before fleeing Germany in 1938.

The artwork was subsequently bought at auction by the son of founder August Oetker and chief executive at the time Rudolf-August Oetker in 1954.

Ullmann’s heirs reportedly had no knowledge of the whereabouts of the painting until they were contacted by Dr. Oetker. David J. Rowland, the lawyer representing the heirs said Dr. Oetker’s actions were exemplary and an “outstanding example of a private collection” doing the “right thing.”

“Our clients, the heirs of Albert and Hedwig Ullmann, want to acknowledge the commendable work of the Kunstsammlung Oetker,” Rowland said in a statement on behalf of the Ullmann heirs. “This is an outstanding example of a private collection doing the right thing regarding Nazi-looted art and sets a standard of best practice in this field. The Ullmann heirs are grateful to the Oetker Collection for returning the Thoma painting Springtime in the Mountains to them in such a responsible manner.”

Dr. Oetker has been conducting provenance research of its own collection since 2015 and the privately owned family business voluntarily follows the Washington Principles, despite the fact that the international restitution and compensation guidelines only apply to public collections.

The food processing company is one of Germany’s largest privately owned companies, employing over 30,000 people and generating an annual turnover of over €12 billion.