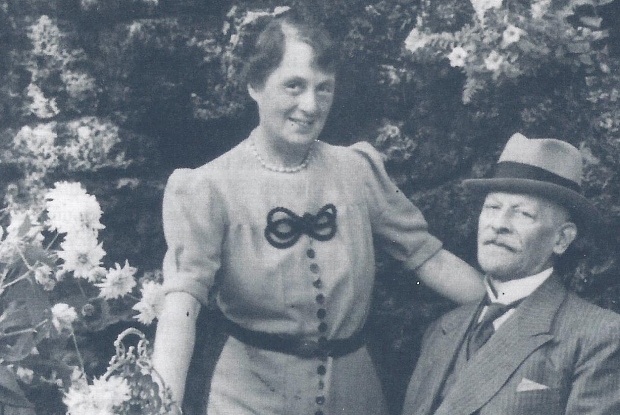 Max and Margarete Rüdenberg (around 1930)

The German government’s advisory panel on Nazi-looted art has asked the Sprengel Museum in Hanover to return Marsh Landscape With Red Windmill, a 1922 watercolour by Karl Schmidt-Rottluff, to the grandchildren of Max Rüdenberg, a Jewish businessman who died in the Holocaust.

Rüdenberg imported feathers from Shanghai that he washed in his factory by the river Leine in Hanover to sell to eiderdown manufacturers. A philanthropist and patron of the arts, he amassed a collection of Modern art—particularly the Expressionists—and of East Asian art including porcelain, ceramics and bronzes.

He arranged for his three grandchildren to escape to England in 1939 on “Kindertransport” programmes. The elderly Rüdenberg and his wife Margarethe remained in Hanover; their home was seized in 1941 and declared a “Jew house,” with the couple allocated just two rooms. They were deported to Theresienstadt concentration camp, where Max perished in 1942 and Margarethe died a year later.

“We are pleased that the Limbach Commission recommends the restitution of our grandfather's Schmidt-Rottluff work,” says Vernon Reynolds, one of Rüdenberg’s UK-based grandchildren. “We have always known he sold under immense pressure prior to his deportation and death at Theresienstadt.”

The city of Hanover previously argued that there was not enough evidence that the watercolour belonged to Rüdenberg before the Second World War. It entered the museum’s collection as part of a donation by the chocolate entrepreneur Bernhard Sprengel. There is no record of Rüdenberg’s purchase or sale of the painting; the family’s case rested on an inventory card in the Sprengel collection and a catalogue entry that listed Rüdenberg as a former owner. The commission, whose decision ends five years of wrangling over the watercolour, says these indications of his previous ownership were strong enough to justify restitution and that any sale would have been as a result of Nazi persecution.