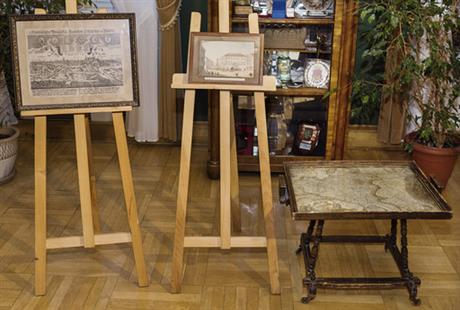 DALLAS (AP) — Growing up, Cathy Hinz and her five siblings would run up and down the stairs at their Minneapolis home, one hand on the banister, the other skimming a memento hanging on the wall that their father had brought back after fighting in World War II: a 16th century tapestry that once graced Adolf Hitler's retreat perched high in the Bavarian Alps.

On Friday, that tapestry, purchased for Hitler's Eagle's Nest the year before the war began from a Munich art gallery owned by a Jewish family, will be formally returned in a ceremony in Germany. It will eventually be displayed at the Bavarian National Museum in Munich.

"The tapestry has been on a journey, and now it's going home," Hinz said.

The tapestry's trip back to Germany began when Hinz gave it to the National World War II Museum in New Orleans. Enough was known about its past that Gordon "Nick" Mueller, president and CEO of the museum, and Robert Edsel, a board member and founder of the Dallas-based Monuments Men Foundation for the Preservation of Art, knew it needed to be returned to its rightful owner.

So Edsel began untangling the mystery.

Hinz's father, U.S. Army Lt. Col. Paul Danahy, often told the story of taking the tapestry after being struck by the historical significance of the moment after his 101st Airborne Division made it to the Eagle's Nest above Berchtesgaden and began interrogating German officers. Danahy, who served in the war as an intelligence officer, died in 1986 at the age of 71, and the tapestry eventually landed on the wall of Hinz's dining room.

Seeing carefully preserved tapestries on a trip to Italy in 2000 gave Hinz pause about continuing to keep the 7-foot-by-7-foot tapestry depicting a courtly hunting scene. She knew it was time to let go of it, she just wasn't sure how.

Edsel said the key was determining whether the September 1938 sale of the tapestry would have been considered forced. His foundation endeavors not only to honor but also continue the work of the Monuments Men, a group of art experts from more than a dozen countries who worked with Allied forces to protect cultural treasures during the war, and afterward to return works stolen by the Nazis.

Thomas R. Kline, a Washington D.C.-based attorney who specializes in art restitution, said multiple factors can go into determining if a sale was forced. For instance, some gallery owners decided to sell collections for fear the Nazis would confiscate them anyway.

It was the family of Konrad Bernheimer, a present-day Munich art dealer, who owned the gallery that sold the tapestry.

"My first reaction was, if you have the invoice then let's have a look at how much they paid," Bernheimer said. "There are two possibilities: Either it was sold below the actual value — then it would indicate that this was a false sale. Or it was sold at the full price — then I would not be able to say it's a false sale."

Bernheimer said he didn't consider it a false sale because the full price — about $10,000 U.S. dollars at the time — was paid. "Not everything that was sold between 1933 and 1945 could be considered a false sale," he said.

Bernheimer said that up until the Nazis' attacks on Jewish synagogues, businesses, schools and homes on Kristallnacht in November 1938, his family was convinced they were safe. After that, family members were taken to a concentration camp, and the Nazis took over their gallery. They were eventually able to rebuild the business after the war.

So with Bernheimer not laying claim to it, the tapestry goes to the Bavarian State, the heir to items once belonging to Hitler. Bavarian National Museum official Alfred Grimm said the tapestry will be restored, studied and then displayed at the museum.

Edsel said the return is a reminder to family members of World War II soldiers to be aware of what items might be found in their homes.

"They're going to inherit these things, and so this is going to be a good chance for us if we can make sure people are aware of the foundation to come forward without feeling any sense of concern about getting in trouble — that's not what we're about," he said.

Edsel founded his group in 2007 and has written several books on the efforts to save art during WWII, including "The Monuments Men," on which the 2014 George Clooney movie of the same name was based. Last fall he announced his foundation would likely be closing due to a lack of funds, but it was reinvigorated after a donation and the offer to participate in a television show called "Hunting Nazi Treasure" that will air next year.

Hinz, who is traveling to Munich for the return ceremony, said she's been a bit nostalgic about seeing the tapestry go so far away, but says it feels right.

"My thought was, you know, it never was ours to begin with. It's something that came into our lives as a result of a moment in history, but the tapestry itself is so much more than our history with it," she said.