After a fraught legal battle, a Munich court today determined that the art hoard of the late Cornelius Gurlitt – much of which is thought to have been stolen from its rightful owners by the Nazis – must, in accordance with Gurlitt’s will, be transferred to Switzerland’s Kunstmuseum Bern.

Gurlitt’s instructions had been challenged by his cousin Uta Werner, who had argued Gurlitt had, when crafting the will, not been of sound enough mind to decided the collection’s fate.

The court’s decision opens a new chapter in the saga of the hoard, discovered by German police in 2010. Gurlitt, son of the quarter-Jewish Nazi art dealer Hilebrand Gurlitt, had sequestered his father’s collection of over 1,400 dubiously-obtained artworks – including pieces by Claude Monet, Henri Matise, and Marc Chagall – in his Munich apartment for decades.

The case was only made known to the public in 2013, when it was exposed by the German newspaper Focus. Its discovery and seizure of Gurlitt’s collection lent new urgency to the often-skirted question of restitution, and Jewish groups denounced the German government’s decision to restrict knowledge of their discovery of the hoard. 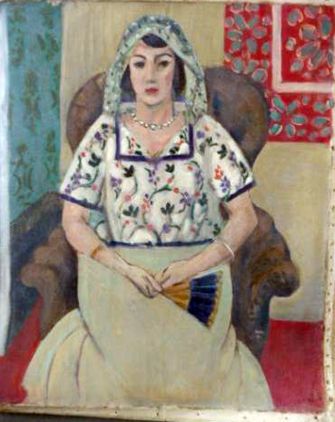 Henri Matisse’s “A Woman Sitting in a Chair,” part of Cornelius Gurlitt’s hoard. The painting has been returned to the heirs of its original owner, art dealer Paul Rosenberg.

Of the artworks seized – which were returned to Gurlitt shortly before his death in 2014, on the provision that he cooperate in efforts to locate the rightful owners of works believed to have been looted –nearly 700, as The New York Times reported, are thought to have been looted.

While Werner said she would investigate other legal opportunities to continue pursuing her claim, the presumed conclusion of the case heralds a mixed success for Jewish groups seeking restitution.

ADVERTISEMENT
x
The Kunstmuseum, responding to the ruling, stated its intention to support restitution efforts already underway by the German Lost Art Foundation, mentioning that it has pledged funding to the effort so long as Gurlitt’s will was upheld. The foundation faces the same difficulties in tracing the artworks’ provenance encountered by the initial German government task force pursuing the investigation, which succeeded in establishing ownership for only five works over its two-year tenure. In January of this year, The New York Times’ Melissa Eddy cited the director of that task force, Ingeborg Berggreen-Merkel, as listing barriers of language and geographic distance as foremost among those obstacles.

The Kunstmuseum confirmed plans will move ahead for a joint exhibit of the artworks with the Bundeskunsthalle in Bonn, Germany. Those exhibits had initially been intended to open at the end of 2016 or start of 2017, until legal delays necessitated a postponement. The museum also declared it would only retain artworks “that most probably were not looted,” reserving the right to decide on individual artworks that cannot be decisively identified as looted or not.

The Munich court’s decision comes at the end of a week marked by another significant development in the restitution movement. On Monday, the United States Senate unanimously passed a bill, earlier passed by the House of Representatives, that, once signed by President Barack Obama, will make it easier for Holocaust survivors and their families to make claims for restitution.