A Spanish museum may have the legal right to keep art stolen by the Nazis. That doesn't mean it should

April
LA Times 14 December 2016
By The Times Editorial Board 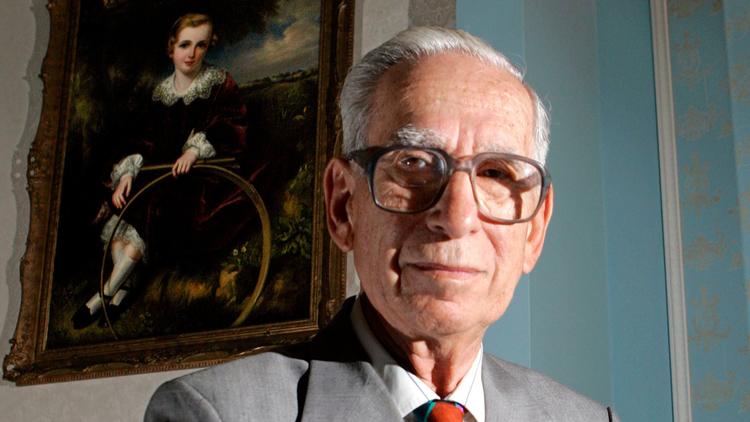 Claude Cassirer, pictured above on May 10, 2005, filed a federal lawsuit in Los Angeles against the Spanish government and an affiliated museum demanding the return of an 1897 painting by famed Impressionist Camille Pissarro that was allegedly taken from his family by the Nazis

When Lilly Cassirer inherited a Camille Pissarro painting of a rainy Paris streetscape in 1926, she hung the Impressionist gem on the wall of her parlor in Berlin. Thirteen years later, Cassirer, who was Jewish, was forced to give up “Rue Saint-Honore, Apres Midi, Effet de Pluie" to a Nazi art appraiser in exchange for visas for her and her husband to flee Nazi Germany.

Cassirer survived and, like thousands of Jews who were forced by the Nazis to give up their belongings, she sought to get her painting back through the restitution courts in postwar Germany. All agreed that her claim was legitimate and that the painting had been stolen from her. However, no one could find it. She settled in 1958 for compensation of $13,000.

But she and her family members, according to their lawyers, never stopped trying to find the painting. For years, Claude Cassirer, her grandson and heir, told friends and clients about the lost artwork. Finally, someone spotted the painting in a publication in 1999 and told Claude Cassirer, who had settled in La Mesa, Calif. The painting was in the Thyssen-Bornemisza Museum in Madrid.

The Cassirer family has been battling with the museum and the Spanish government ever since. Claude, who died in 2010, has been replaced by his children, David and Ava, and the United Jewish Federation of San Diego County as the plaintiffs. Their lawyer, David Boies, argued their appeal on Dec. 6 before the U.S. 9th Circuit Court of Appeals.

The painting has had a long journey. It surfaced in the U.S., passing from a collector in L.A. in 1951 to another in St. Louis in 1952. In 1976, a New York gallery dealer sold it to Baron Hans Heinrich Thyssen-Bornemisza, who put it in his extensive art collection in Lugano, Switzerland. He sold the collection to the Spanish government to house in Madrid. The painting has been on display there since 1992.

A tangle of legal issues is in play here. A federal judge ruled last year that the museum is the rightful owner of the painting under Spanish law because it had held the painting publicly for more than 20 years. The Cassirer family argues that the court should have found the museum an accessory to the theft — which would invalidate its claim to the painting — since the museum either knew or should have known that the artwork was stolen.

The museum argues that its lawyers scrutinized the history of the painting and found no claims on it, and that the Cassirers didn’t look diligently enough for the painting. It also contends that the payment Lilly Cassirer received in 1958 was full compensation for her loss. The Cassirers’ lawyers argue that it was anything but. And even the federal judge, in his decision, noted that Lilly Cassirer “did not waive her right to seek restitution or return” of the painting.

Here’s the bottom line: This painting — which would probably sell for more than $30 million today — was tragically stolen from Lilly Cassirer by the Nazis. The museum should do the right thing and return it to the Cassirer family.

Frankly, it seems odd that museum professionals didn’t question the provenance of the painting. The baron’s receipt from the New York art dealer said virtually nothing about the painting’s history of ownership. That alone should have been a red flag. And torn labels on the back of the painting indicated it had been in Berlin. Art that could have been in circulation during the Nazi era generally requires greater scrutiny because so much art was looted during that period.

The Cassirers’ case comes after a decade or more of pressure on museums to return to countries and private owners art that was stolen. The Getty Museum has returned numerous antiquities to Greece and Rome. The Austrian government finally  returned to Maria Altmann, a Jewish refugee, five works by Gustav Klimt that had been seized by the Nazis.

Even the judge who ruled in favor of the Spanish museum urged its officials to “pause, reflect and consider” a mutually agreeable resolution in light of Spain’s acceptance of international accords that seek to identify stolen artworks and find rightful owners. In this case, the Cassirer family found the museum. No matter what the appeals court rules, the honorable thing for the museum to do would be to return the Pissarro that should never have been taken from Lilly Cassirer more than seven decades ago.