Paintings by Beckmann, Gris and Klee Valued at Nearly $20 Million That Once Belonged to Flechtheim Are at Issue in New York Lawsuit

Sullivan & Worcester LLP has filed suit against Bavaria and its state museums in U.S. District Court in Manhattan on behalf of our clients Dr. Michael Hulton and Mrs. Penny Hulton, heirs to the renowned and persecuted Jewish art dealer Alfred Flechtheim.  The Hultons have asked the United States District Court for the Southern District of New York to restitute several paintings by Max Beckmann, Paul Klee, and Juan Gris that are now in the possession of the German federal state of Bavaria, Adolf Hitler’s and the Nazi party’s homeland, and its Bavarian State Paintings Collections (known in German as the Bayerische Staatsgemäldesammlungen, or BSGS).  We are aided in this case by our co-counsel Markus Stoetzel and Mel Urbach, Esq.

Our full press release can be found here.  Reuters and Der Spiegel have covered the filing thus far in English, as has Deutsche Prese Agentur via outlets like the Frankfurter Allgemeine Zeitung.  Prior coverage in the English and German versions of Der Spiegel also give further background to the dispute.  As detailed below and in the Complaint, this is a tragic story with connections to more recent scandals involving Bavaria, including the ongoing Gurlitt fiasco.

Alfred Flechtheim was the owner of successful galleries in Düsseldorf and Berlin, responsible for sponsoring the emerging careers of artists like Max Beckmann, George Grosz, and other stars of the Weimar era.  As the Nazis’ power increased in the early 1930s, Flechtheim became a convenient scapegoat.  Nazi propaganda newspapers and magazines used Flechtheim’s picture with racist captions and slogans long before 1933.  Here is one unsettling example (stating "This? Or this?", it is meant to refer to the supposed "choice" faced by Germany in 1933). 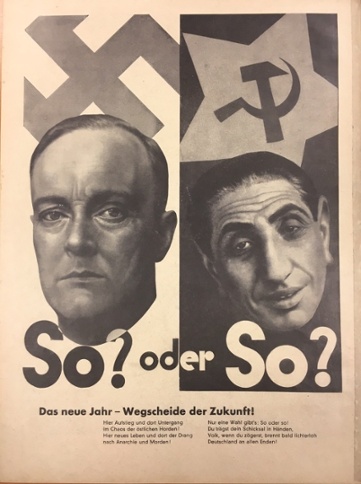 Once the Nazis seized control of Germany, his galleries in Berlin and Düsseldorf were “Aryanized,” the state-sponsored process through which Jews’ property and business were seized for the benefit of approved “German” owners.  Flechtheim lost control of his affairs and fled Germany in fear of his life.  His business was reopened by his former chief assistant, who in the end turned out to be a Nazi opportunist.  Flechtheim took refuge first in Paris and then in London, where he died impoverished in 1937.  His wife committed suicide in 1941, and his mother-in-law and niece followed suit in 1942 on the eve of their deportation to the death camps.

The lawsuit is brought pursuant to the Foreign Sovereign Immunities Act (FSIA), which confers jurisdiction over the defendants because the claims concern rights in property taken in violation of international law, and Bavaria and the BSGS do big business within the United States through exhibitions and other activities like the famous Hofbräuhaus franchises and “Oktoberfest” events.  The 1998 Washington Conference Principles, which established standards of restitution for Nazi-confiscated art, and to which Bavaria previously agreed in a 1999 resolution with Germany and its other federal states, obliges Bavaria to engage in efforts to reach “fair and just” solutions, to which these defendants have given only lip service.

Bavaria has been embroiled in controversy in recent years on the issue of Nazi-looted art, even though 29 members of the U.S. House of Representatives sent a letter to Bavarian Minister President Horst Seehofer in support of the Hultons’ claim for restitution or compensation for the Holocaust–related confiscations of Flechtheim’s art.  As readers here are well familiar, in 2013 the German magazine Focus revealed that Bavaria had seized 1,280 works of art from the reclusive Cornelius Gurlitt in Munich, works later revealed to be clouded in suspicions of Nazi theft through their connection to his father Hildebrand Gurlitt.  More than three years later the Gurlitt investigation is mired in a lack of transparency and lack of progress.  It has since been revealed that Gurlitt traded in work that had once belonged to Flechtheim.  More recently, it was revealed that for years Bavaria had re-sold looted works returned to Germany by America’s famed “Monuments Men” to prominent Nazi families rather than restitute them to Holocaust victims.  Bavaria has returned barely a dozen works of more than a 1,000 with Nazi-looting connections so far.