In Holland, a Jewish journalist belatedly honored for unmasking a ‘monster’ 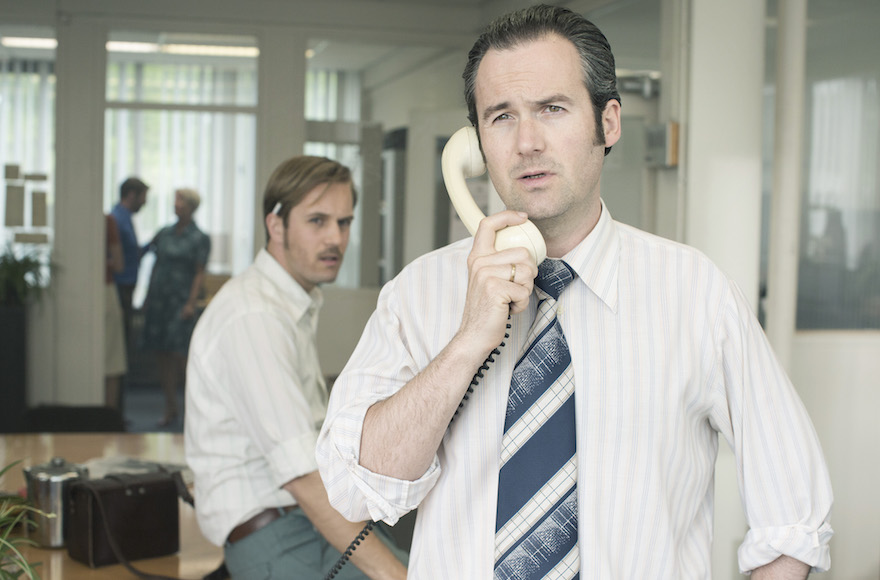 Guy Clemens portraying Hans Knoop during filming of the drama series “The Menten Case” in the Netherlands in 2015.

AMSTERDAM (JTA) — Forty years after his reporting exposed one of the worst war criminals in Dutch history, Hans Knoop is still celebrated in his native Netherlands as a hero.

On Nov. 23, more than a million television viewers watched a public broadcaster’s historical period drama on how Knoop, a Dutch Jewish journalist, unmasked the art collector Pieter Menten in 1976 as a monster who murdered hundreds of Polish Jews and stole their property with help from German Nazis. It was the highest rating for such a production in the Netherlands.

The host of the Netherlands’ most-watched talk show, Jeroen Pauw, last week called Knoop’s discovery “a brilliant, unmatched journalistic achievement.” He recalled how the Knoop expose led to Menten’s arrest in a country that was profoundly shocked by his ability to escape justice and amass a fortune built on pillage.

But alongside this recognition Knoop, a father of two whose mild manners and amiable expression conceal a steely determination, has paid a heavy personal price for the discovery. Harassed by Menten’s lawyers, supporters and even other journalists, Knoop said the scoop effectively ended his career as a working journalist in a country that many believe has still not fully owned up to its Holocaust-era history.

“Things don’t always go as they should go,” Knoop, 73, told JTA in an interview.

Menten, whose belated conviction for war crimes exposed deep flaws in Holland’s ability to try collaborators, eventually served five years of a 10-year sentence — itself a concession to his advanced age — before he died in 1988 at 81. But Knoop said “the Menten affair meant the end of my career as an active journalist.”

While Knoop considers that regrettable, he said it was no surprise.

“As I interviewed witnesses, it became clear that Menten’s modus operandi was to use his influence and fortune to either buy or destroy anyone who accused him of wrongdoing,” Knoop said. “That’s part of the reason he was able to evade justice for so long.”

Menten’s unusual story in Poland began in the 1920s, when he moved there to conduct business, including with many Jewish associates. He lost all his vast property there when the Russians invaded the country’s east in 1939, but regained it when the Nazis took over the territory in 1941. Menten befriended the Nazi occupation forces, tracked down his former associates and murdered them, Knoop reported.

Menten transported war booty to Holland, where after World War II he was sentenced to several months in jail for the general charge of “assisting the enemy” over his chumminess with Nazi officers. The multimillionaire art dealer escaped more serious charges by libeling his accusers, but ultimately was exposed after trying to auction off stolen goods.

Knoop, then the editor-in-chief of a medium-circulation weekly owned by the Telegraaf daily, began researching testimonies collected in Israel by the late Haaretz journalist Haviv Cnaan, whose family was among Menten’s victims. 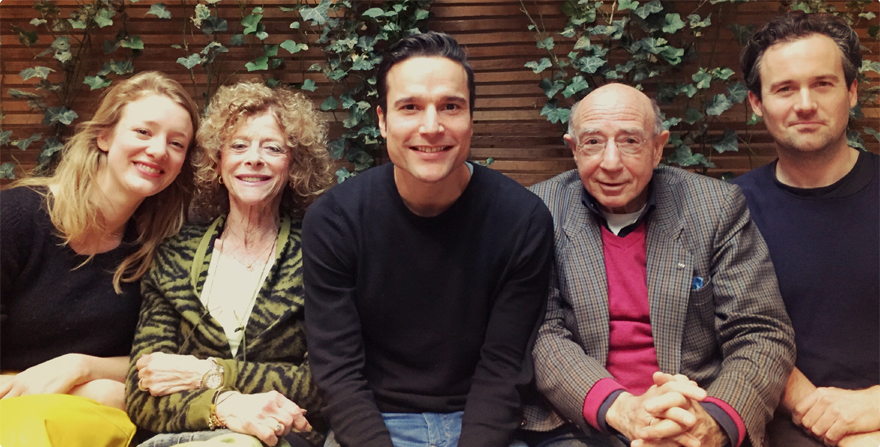 Hans Knoop, wearing jacket, and his wife, Betty, second from left, meeting the cast of the drama series The Menten Case in Hilversum, the Netherlands, in 2015.

Knoop was warned off the story by people whose own careers were ruined by Menten when they threatened to expose him. He soon realized they were right.

Knoop was forced to quit the Telegraaf daily soon after his investigation was published because, he said, another reporter for the paper “began spying” on Knoop at Menten’s behest. And while he toured the world giving lectures about the Menten case, no other major publication in the Netherlands would hire Knoop “because I had a stamp of my forehead,” he recalled.

The attention given to the Menten affair these days is part of a wave of renewed interest in Holocaust-era complicity in the Netherlands, a country where the efforts of those who saved Jews — Holland has 5,600 Righteous Among the Nations, the world’s second largest tally — have long eclipsed the widespread collaboration that led to the murder of 75 percent of Dutch Jewry. It is the highest death rate in occupied Western Europe.

Last week, the NRC Handelsblad revealed that most notaries aided the plunder of the Dutch Jews’ property. The revelation followed a scandal in 2014 showing how throughout the 1960s,  the government levied fines on Jews who were late paying their property taxes because they were in concentration camps. Such discoveries have prompted repeated but unheeded demands that the government formally apologize for the country’s complicity in the Dutch Jews’ fate.

Knoop encountered some bigotry over his exposure of the Menten affair – one colleague accused him of being overly emotional about the case because Knoop is Jewish – but he attributes his ejection from the journalistic scene to the sectarianism of Dutch publications back when they were affiliated with adversarial parties and groups, including Protestants, Catholics and Socialists.

“If you were a Telegraaf journalist, you couldn’t just switch to another publication in the ’70s,” he said. “You’d be branded. And I was.”

So Knoop set up a successful PR agency – it was one of the first in the Netherlands – which he ran alongside his activities, often pro bono, as a spokesman for Jewish organizations and as a pro-Israel columnist, among other positions.

Still, Knoop is best known for his crucial role in bringing to Menten to justice despite several death threats by the wealthy art dealer.

Knoop says he has no doubt Menten would have had him killed if he could get away with it. And while the Menten affair exposed problems in the Dutch justice system, “I knew that I was protected because if anything would’ve happened to me, all the arrows would point at Menten,” Knoop said.

Menten’s Jewish victims, regarded by the Nazis as sub-humans earmarked for annihilation, had no such protection under the German occupation. Menten hounded former associates even after they fled their former homes. Wearing SS uniforms provided to him by his friends — he was officially neither a Nazi nor a soldier — he executed his enemies by firing squad, sometime making their relatives watch as he commanded the gruesome event from an armchair with a wave of his hand. The special war crimes tribunal found him guilty in the mass murder of 20 to 30 people, mainly Jews in the Polish village of Podhorodze in July 1941.

The unusual nature of Menten’s story – he is perhaps the only civilian known to have committed mass murder on that scale during World War II purely for financial gain – and the testimonies against him at first sounded far-fetched to Knoop, a skeptical and cool-headed journalist.

He was led to further doubt their veracity by Menten’s proclaimed willingness to confront his accusers and feigned openness to Knoop in interviews.

“I thought, ‘this is not the behavior of a guilty man,’” Knoop recalled.

But he reconsidered when Menten tried to bribe him to bury the story, and after Cnaan, the Haaretz journalist, offered eyewitness testimony of Menten’s crimes.

From then on, Knoop didn’t let Menten out of his sight until he was in prison. Knoop even traced Menten in Switzerland, where Menten escaped the Netherlands to avoid going to prison. Knoop was there when the Swiss police arrested Menten ahead of his extradition.

“I believe Menten was always a monster,” Knoop said, “but he took off the mask only when the circumstances allowed it.”