This painting was looted by the Nazis, then seized from my living room 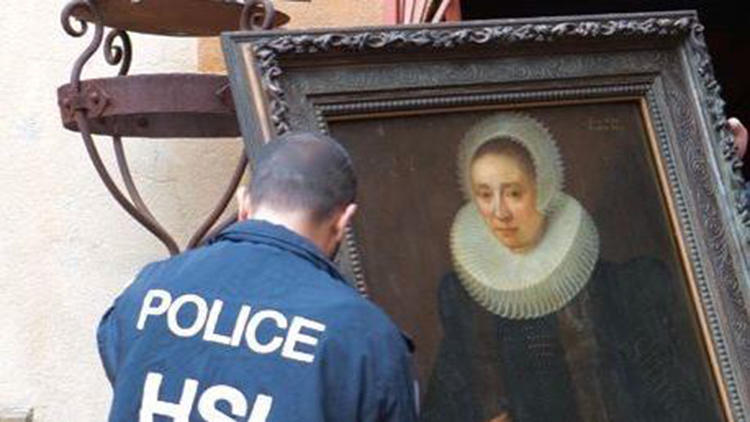 "Portrait of a Lady" by Melchior Geldorp being removed from the author's home by police. (Courtesy of Craig Gilmore)

Two agents from U.S. Homeland Security’s ICE unit arrived at my door in September looking for a Polish lady — not a person, but a painting: Melchior Geldorp’s “Portrait of a Lady.” She had, they informed me, been looted by the Nazis from the National Museum in Warsaw.

Unsure if these gentlemen were indeed who they claimed to be, I didn’t invite them in. But I knew exactly what they were seeking: My partner, David, and I had purchased this very portrait — ostensibly the work of a different artist — a decade earlier from a major auction house in New York.

Upon their leaving, I stood dumbfounded, holding a packet of information about the alleged provenance of our painting. After calling David at work to drop this bombshell, I began a Googling frenzy, eventually bringing me to Poland’s Division for Looted Art website. Seconds later I was gawking at an old black-and-white photo of our beloved lady, a beautiful portrait painted on oak panel in 1628. Tears welled in my eyes with the realization that, without question, if this were true we needed to do our duty and get her safely home.

Decades behind the Iron Curtain meant Poland didn’t start aggressively seeking its lost patrimony until the late 1990s.
Being an opera singer, I was among a group of vocalists on a government-sponsored tour of Israel some years ago. During a visit to a community center for Holocaust survivors I was asked to sing. The emotion of being surrounded by people who had prevailed through such unimaginable horrors was overwhelming, and I found myself unable. Excusing myself, I attempted to make up for it by spinning several of the ladies around the dance floor — all the while trying not to look down at the numbers tattooed on their wrists.

Now this memory flooded back to me, and I found myself once again in tears, hyper-aware of how Nazi atrocities affect us still to this day.

The toll of World War II in Poland — including the deaths of 6 million Poles, Jews, and other outcasts, including homosexuals — is unimaginable. Being gay men, David and I feel a personal connection with these losses and are conscious of how political shiftings can lead to vulnerability. This, added to the knowledge that Poland’s LGBTQ community is still in a struggle for its basic rights, has weighed heavily on our minds.

As well as human loss, during and after the war, an estimated half-million Polish cultural objects were destroyed or pillaged — first by the Nazis and then the Soviets. Decades behind the Iron Curtain meant Poland didn’t start aggressively seeking its lost patrimony until the late 1990s. The Foreign Ministry’s Division for Looted Art, where I found our painting’s image, lists more than 60,000 missing works. They have retrieved about 600. We are proud to say that ours is one of them.

Eventually, through a family member who works with Homeland Security, we confirmed the identity of the agents who had so mysteriously showed up, and the wheels of international art repatriation began turning in earnest.

During the hectic month that followed, I clutched to the words “global citizenry” as my mantra. The notion of behaving as a global citizen can sometimes seem abstract, but it was glaringly obvious that this situation was bigger than our immediate surroundings. More than that, we realized our beloved lady was, herself, a global citizen, called upon to serve a greater purpose than the beauty she lent to our Silver Lake home.

At last we had just one last hurdle. We had installed the painting into a beautiful 19th century frame, and felt strongly that it represented the American leg of her journey. We wanted to donate it along with the painting but weren't sure how to go about it. Serendipitously, we received an introduction to Randy Schoenberg, who famously litigated the return of five Gustav Klimt paintings (depicted in the film “Woman in Gold”). He encouraged me to contact Poland’s Division for Looted Art directly, which I did, sending a copy of my correspondence to Homeland Security. The offer of the frame was gratefully accepted.

It’s difficult to express how a painting can become such an integral part of your life, even a part of your identity. For 10 years this portrait overlooked our dining table; watching like a matriarch. Residing over thousands of meals, she silently took in our day-to-day dialogue. She sadly looked over David’s shoulder while he dealt with the unexpected death of his mother; she lent support during the years I worked tete-a-tete alongside an earnest young man, helping him close his educational gaps before moving on to earn his degree at Berkeley. The ups and downs of 10 years, she was there for it all.

As the day of departure drew near, we did what anyone would do for a loved one who was leaving: We threw a farewell party. Emulating our 17th century lady, David and I sported neck-ruffs crafted from car air filters, and prepared a buffet of Polish sausages, pierogis and vodka punch. Our friends came, marveled at the story, and expressed their personal goodbyes. It was a cathartic evening.

The evening before she was to leave, we carefully moved her to an easel at the end of our long entry hall. We desired to send her off in a style that honored the time she had graced our household. The next morning we dressed to the nines, chilled champagne for a final toast with the Homeland Security agents, and nervously awaited their arrival.

Throughout this ordeal, the lead agent had graciously allowed us to feel like we had control over the process. Receiving no formal request for the painting’s return, we felt we were repatriating of our own volition. Reading the necessary paperwork, however, there was no avoiding the terminology being used: seizure. It stung. We signed the paperwork, and then our beloved 400-year-old friend was unceremoniously wrapped in what looked like blankets and pillows from someone’s couch and put into the back of a nondescript vehicle.

Then she was gone.

With her we sent off not just the frame, but photos of her American home. We also included a letter to the National Museum and people of Poland. The letter said, in part:

“This painting has been a revered part of our household, and we are grateful to have been a safe haven over the past decade of her almost 400-year story. We very much look forward to visiting Poland, and seeing our dear friend hanging at the National Museum, Warsaw.”

Craig Gilmore is an opera singer and actor. He and his partner, artist David Crocker, live in Silver Lake.