As size is an important part of this story, let me start by giving you some context.

The National Gallery in London has around 2,300 paintings in its collection - which might sound a lot, but is a piffling hoard compared to the Museum of Modern Art in New York, which has gathered almost 200,000 artworks of varying types and quality.

That is properly impressive. But it's not a patch on what you will find - reportedly - in an unprepossessing, windowless warehouse complex in south-west Switzerland.

I say "reportedly" because nobody actually knows exactly how many works of art are stored in the Geneva Free Port, but its chairman talks of "a million", while the New York Times says the number is nearer 1.2 million (including around 1,000 works by Picasso). Either way, it is oceanic. 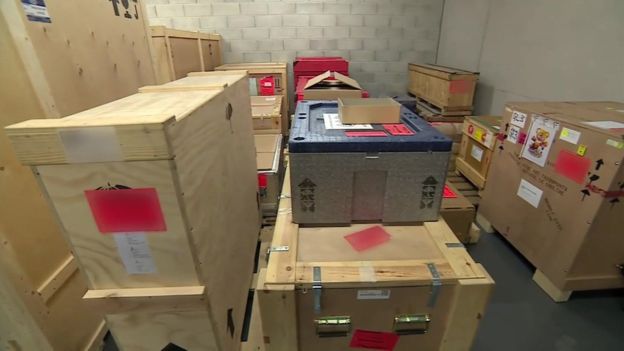 The artworks are hidden in bespoke wooden crates

It is not the property of a single institution or art-crazed individual - it belongs to an unaligned group of art dealers, collectors, freight forwarders and offshore companies (generally with opaque ownership), who appreciate the anonymity and prison-like security provided by the Swiss facility.

It is a strange place. As Ann Widdecombe once said of Michael Howard, it has "something of the night" about it. It feels sinister. And spooky in a Kubrick's The Shining sort of way, as you walk along miles of identical corridors with faceless locked metal doors, behind which you imagine great works of art concealed and incarcerated in their bespoke wooden cases.

By its own admission, the Geneva Free Port has been used in the past by "undesirable tenants" to conduct illicit archaeological trafficking, a fact that was made public when Italian police were given access a couple of years ago because they suspected stolen treasures might be stashed there.

They were right - and then some. By the time they put down their crowbars, they had lifted the lids of 45 crates containing looted Roman and Etruscan antiquities including rare and important ancient sarcophagi.

That was embarrassing. Worse, it created speculation that the Free Port could be an unwitting base for illegal trading by terrorists selling off recently plundered Syrian artefacts to fund their activities. 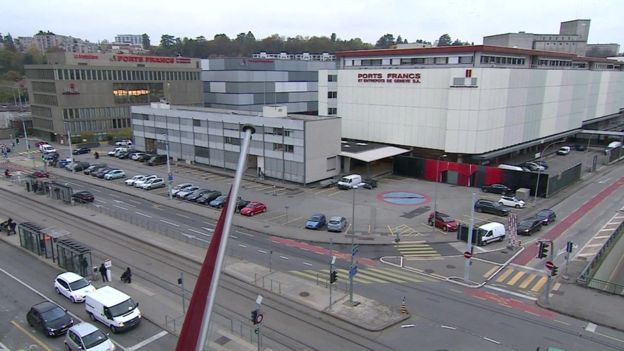 Enter David Hiler, a high-ranking local politician who had retired from public office and subsequently taken on the chairmanship of the Free Port. He is an avuncular character who likes a cigarette as much as he doesn't like dodgy dealers damaging the reputation of his city.

He quickly imposed new rules aimed at flushing out baddies and stopping ill-gotten gains getting in. He introduced a new attitude of openness, along with media briefings, regulatory updates and invitations to visit.

The official guided tour I went on was as interesting as it could be given the limitations the facility insists it operates under. I got to see a room full of boxes of wine, which represented a fraction of the three million bottles stored there (the Free Port has been called the "biggest wine cellar in the world").

I enjoyed a trip to the on-site, independently run conversation studios, where clients take their artworks for a pre-sale MOT. And I popped into a small gallery-type space built among the lock-ups for clients to show and sell their artworks (tax free).

I wasn't allowed to go where I really wanted to, which was one of the rooms leased by its clients. That was out of the question because, my guide told me, the Free Port is simply the proprietor: "The thing is Will, if you rented an apartment from a landlord he would not have the right to enter the space without first having your permission."

That wasn't the approach my old landlord in south London used to take, but then he wasn't Swiss and I didn't hang around. Unlike some of the tenants at the Free Port, who can stay for decades. Which might be good for business, but it does create a hostage to fortune for David Hiler and his colleagues, who insist they have no idea what their rented-out rooms contain.

'A sad and bleak experience'

He is sure, though, that among the million or so artworks behind the metal doors, there are bound to be some with very shady provenance.

It weighs on him. He says he would like the Swiss customs and police to come in and undertake a complete audit of everything in the Free Port so he can know for once and for all what he has under his corporate roof. But that's not going to happen because, he says, "it's not the Swiss way".

I wish they would, if only so I could stand outside the night before to see how many lorries were going to and fro.

I suppose the natural instinct when faced with such secrecy is to be suspicious. I was. But more than that, I found the visit a rather sad and bleak experience. If there are really a million artworks in there, all of which were created to seen and enjoyed, it seems a travesty to the point of immorality.

We all know that art has become a commodity, but I hadn't realised until I went to the Free Port that it has become a tradable stock that never needs to see the light of day.

Those Picassos might never come out, remaining boxed-up in a cold corner as they shift from one owner's capital assets balance sheet to another's.

We can argue all day long about the meaning of art, but surely it isn't that.