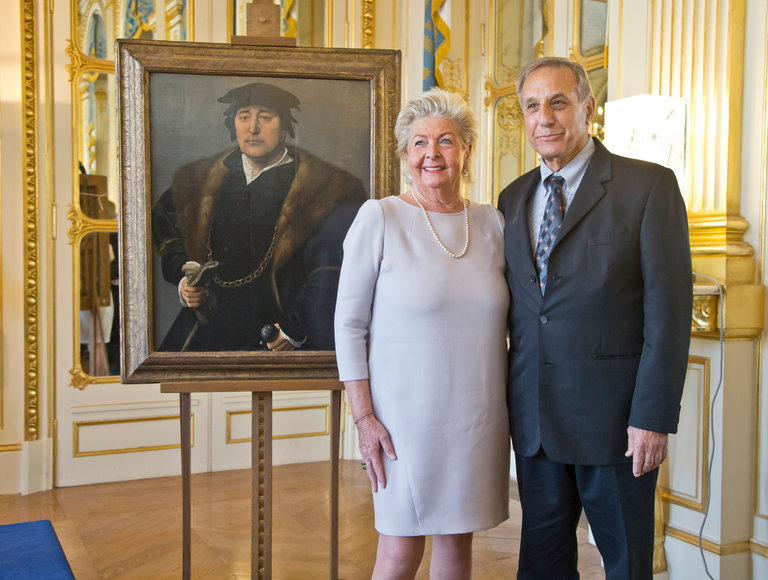 Henrietta Schubert and Christopher Bromberg, grandchildren of Henry and Hertha Bromberg, with the painting attributed to the school of Joos van Cleve at a ceremony at the Culture Ministry in Paris.

PARIS — France on Monday officially returned a 16th-century portrait, attributed to Joos van Cleve or his son, to the descendants of Hertha and Henry Bromberg, a German-Jewish couple who were forced to sell the work of art in Paris during World War II.

Audrey Azoulay, the French culture minister, said at a ceremony at her ministry here that she was “very happy” to return the painting to the Brombergs’ grandchildren, Christopher Bromberg and Henrietta Schubert, who attended the ceremony with their spouses.

“I measure the importance of this gesture in the eyes of history,” Ms. Azoulay said, while also acknowledging that the restitution was “quite belated.”

Henry and Hertha Bromberg sold the painting in Paris in 1938 as they were fleeing Nazi Germany for the United States. Henry’s father, Martin Bromberg, had acquired the work at an auction in Berlin in 1912.

The portrait, about 34 inches by 26 inches and painted on wood, shows a man wearing black clothes and a brown fur coat. He is holding a pair of gloves in his right hand and the pommel of a sword in his left one, suggesting a high social standing.

The work has the characteristics of 1530s and 1540s Flemish portraiture, but it is not entirely clear who painted it. According to the culture ministry, it is attributed either to Joos van Cleve, who was active in Antwerp in the first half of the 16th century, or to his son, Cornelis van Cleve.

After the Brombergs sold it in Paris, the painting passed through the hands of several art sellers and collectors before being bought by a German art trader in 1941, who then sold it to the Reich Chancellery for a museum planned by Hitler in his hometown, Linz.

In 1945, Allied troops discovered the painting in mines near Salzburg, where it had been sheltered from aerial bombings, and it was returned to France in 1949. It was stored and possibly displayed at the Louvre from 1950 to 1960, then sent to the Musée des Beaux-Arts in Chambéry.

Over 60,000 art objects confiscated from France during the German occupation were recovered after the war, and more than 45,000 had been returned to their owners by 1949. But this portrait was one of more than 2,000 works of art that were deemed orphaned and distributed among French museums.

Since 1951, however, only 107 of those have been returned, and critics contend that the French government has been too slow in seeking out the rightful owners and returning the art to them.

Ms. Azoulay acknowledged during the ceremony on Monday that it was only “recently” that France had decided to “accelerate” the restitution process, noting that the French authorities had now identified the original owners of 27 other objects, paving the way for their return.

“It was no longer possible to merely wait for the rightful beneficiaries to come ask for the restitution of what is theirs,” Ms. Azoulay said, adding that France was being more “proactive.”