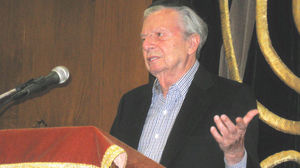 Forest Hills resident Milton Esterow has been recognized by the Austrian consul general for his role in revealing Nazi art looting.

The Nazis' looting of art from their Jewish victims has only recently come into the public’s consciousness with movies like “Monument Men” and “A Woman in Gold.” But it was the 1984 article, “Legacy of Shame: Nazi Art Loot in Austria” in ARTnews magazine that started it all.

The owner and editor of ARTnews, Milton Esterow, was the keynote speaker at the annual Kristallnacht remembrance at Machane Chodosh synagogue in Forest Hills on Nov. 7.

Kristallnacht, “The Night of Broken Glass,” occurred on November 9-10, 1938 after a Jewish 17-year-old, Herschel Grynszpan, shot and killed a German diplomat, Ernst vom Rath, in Paris. An organized Nazi response led to more than: 30,000 Jewish men sent to concentration camps; 7,000 Jewish business windows smashed; and 1,000 synagogues burned in Germany and Austria. It’s considered the beginning of the physical persecution leading up to the Holocaust.

Austria has nearly 8,000 pieces of art taken from Jews hanging in museums and in people’s homes. Germany has “thousands and thousands,” said Esterow. “They know, or should know, it was stolen but they say, ‘no one has claimed it and nobody knows who owns them.’”

Esterow, a Forest Hills resident, received a tip from Professor Albert Elsen in Palto Alto, Calif. saying there was a monastery in Mauerbach, Austria, near Vienna, which had thousands of pieces of stolen art. “I didn’t know whether they should be condemned or congratulated.”

The first person Esterow met in Vienna was famed Nazi hunter Simon Wiesenthal who said, “I’ve been hunting Nazis, not art,” but gave Esterow an article he had written.

Esterow asked an Austrian minister on cultural affairs, “When can I visit the monastery? The minister pounded the desk and said, ‘You can’t go!’” and ended the one and a half minute interview. Esterow was now suspicious the minister was hiding something.

After the article appeared, the chancellor of Austria, Bruno Kreisky, who was Jewish, promised to get to the bottom of it but nothing was done, said Esterow.

Dozens of articles in ARTnews led to Austria setting up a claims process and stopping legal maneuvers preventing return of paintings, jewelry and other items.

With cooperation from the Austrian government, the Christie’s Auction House in Manhattan raised nearly $14 million dollars in 1996 by selling some of the stolen art. The money went to victims of the Holocaust, both Jewish and non-Jewish. Some had been so poor, they couldn’t afford their medical care.

Greta, a Holocaust survivor from Austria, was able to get her family’s Japanese dishes used during Passover Seders from Christie’s Auction House. Greta sent the dishes to her daughter in Israel to continue the tradition.

However, stolen art still hangs in the Museum of Modern Art and the Guggenheim Museum of Art in New York City, as well as in the Detroit Institute of Art. The United States declines restitution, claims and enforcement of laws regarding stolen art.

Countries like Italy, Switzerland, Hungary, Russia, Poland and Argentina are particularly behind in admitting and returning stolen art, said Esterow. Many of their museums showcase stolen art.

“Austria’s change of heart influenced other countries to change,” said Esterow. Auction houses in the U.S. and in most of the Western countries have databases and techniques preventing buying and selling of stolen art. England, France and Holland have developed a claims system to recover stolen art.

This year, the Austrian government awarded Esterow and Andrew Decker, a reporter who worked on these stories, the Cross of Honor for Science and Art.

The Austrian Consul General Heindl said when presenting their medals: “A great thanks to you. You contributed to Austria facing its past honestly and thereby becoming, in a way, a better country.”