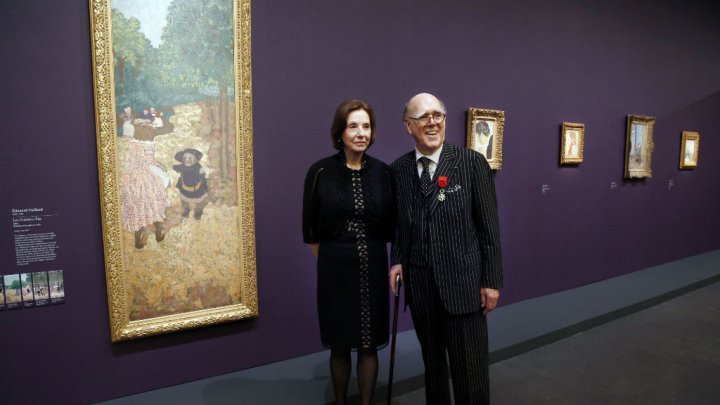 US couple Marlene and Spencer Hays have bequeathed their enormous collection of late 19th and early 20th century masterpieces to the Musée d’Orsay in Paris upon their death, in the largest gift to a French museum by a foreign donor in over 70 years.

The collection, which is made up of around 600 works, is worth an estimated €350 million, and includes such famed artists as Edouard Vuillard, Pierre Bonnard and Edgar Degas.

The Hayses, both 80, will donate an initial 187 pieces (worth an estimated €173 million) during an official ceremony presided over by French President François Hollande at the Elysée presidential palace in Paris on Saturday evening.

“This donation, which is exceptional for its size and coherence, is the largest a French museum has received from a foreign donor since 1945,” French Culture Minister Audrey Azoulay said on Friday.

Over the past 15 years, the Hayses have developed a close relationship with the Musée d’Orsay, which showcased a selection from the couple’s collection in a 2013 exhibition, “A French Passion”.

But the Hayses’ love affair with France dates back to 1971, when they made their first trip to Paris from the United States. By that time Spencer Hays – who came from humble beginnings – had made his first millions through companies that sold men’s suits and books, among other things.

“When Marlene and I grew up in a little old town in Texas, even visiting France was far beyond our expectations,” Hays told America's National Public Radio (NPR) in 2013. “But in 1971, we made our first trip to Paris, and our love affair with this wonderful country began. We’ve returned every year and our passion has grown.”

It was shortly after this trip that the couple bought their first work of art to decorate their home in Nashville, Tennessee. Since then, their collection has grown to include many pieces by a group of post-impressionist avant-garde artists known as the Nabis (which means “prophet” in Hebrew), as well as artists from the turn of the last century.

The Hayses’ love of France ran so deep they even built a replica of the Hôtel de Noirmoutier -- an 18th century mansion located on the rue de Grenelle in Paris’s chic 7th arrondissement (or district) -- in Nashville, USA, filling it with their art collection and French antiques.

“They are collectors who are interested in French art from the second half of the 19th century, with paintings that are very realistic and serene, which depict Parisian life, because their great love is France – it’s Paris,” Isabelle Cahn, head curator at the Musée d’Orsay, told France Info radio in an interview published on Saturday. “They wanted to surround themselves with this vision of the 19th century”.

After decades of building their collection, the couple has now decided to repatriate their art to France on the condition that it is exhibited in a single space.

To accommodate the Hayses’ wishes, the Musée d’Orsay will move its library and archives to make room for their collection, according to the museum’s president Guy Cogeval, who has known the couple since 2001 and has been largely credited with making the donation possible.

A French law prohibiting museums from selling off pieces donated to their collections might also explain the couple’s decision to donate to a museum in France instead of one closer to home.

“There’s a rule that most certainly played a role, which is that is impossible to break up a collection, unlike American museums, which can relinquish works and sell them,” Cahn said.

Perhaps just as important, the Hayses’ collection is a perfect fit for the Musée d’Orsay, which features mostly French works of art from 1848 to 1914. For example, the museum, which already owns five out of nine panels in the Vuillard series “Public Gardens”, is now set to obtain a sixth through the couple’s donation.

“Even in our wildest dreams, we never thought that we’d come here to donate a collection of art work to the French, to the Musée d’Orsay!” Spencer Hays told France Info. “We’re very pleased with our decision. The collection will be here after our death, and we are very happy about it.”

Until then, the couple will be able to continue to enjoy their collection at their apartment in New York, or their home in Nashville.