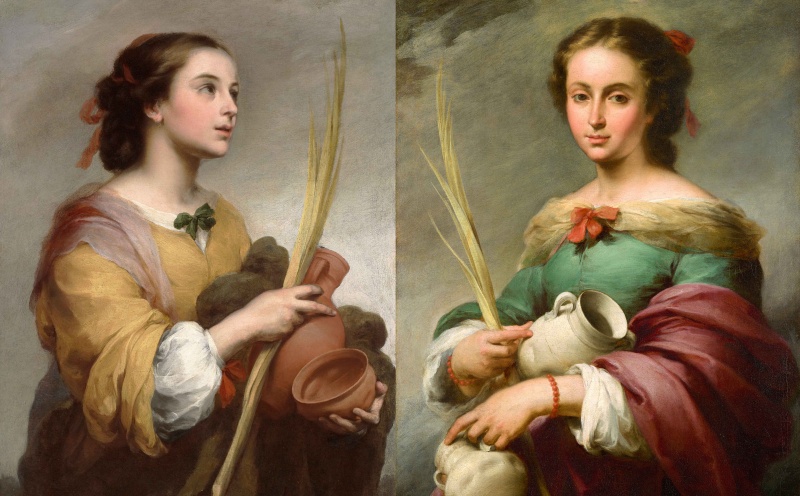 The Meadows Museum at Southern Methodist University today announced that a lengthy investigation has concluded with the discovery of the true identity and postwar provenance of two paintings in its collection that had been seized by the Nazis during WWII. With the help of a series of serendipitous discoveries and six years of relentless detective work by Meadows Museum curator Nicole Atzbach, the Museum now has definitive evidence to prove that two major paintings by Spanish master Bartolomé Esteban Murillo had in fact been lawfully restituted to the Rothschild family following the war, long before the 1972 sale to the Museum. The path to uncovering the paintings’ identities and provenance included finding an overlooked note buried deep in the archives of the French Diplomatic Archive Center of the Ministry of Foreign and European Affairs, revealing the paintings’ rightful owner; decoding an erroneous transcription of Nazi inventory numbers; and untangling the conflation of the two paintings with two other works ascribed to Murillo, a case of misidentification that had extended more than 100 years.

As with most cases involving Nazi-looted art, Atzbach was faced with a set of challenging circumstances, a tangle of false leads, and missing evidence compounded by a complex web of mistaken identities. Suspicions surrounding the provenance of Murillo’s two paintings of Seville’s patron saints, Saint Justa and Saint Rufina (both c. 1665), first arose in 2006 when two wartime photographs were brought to light by Robert Edsel, clearly placing the paintings in Germany at the end of WWII. This discovery propelled Atzbach to begin investigations into the paintings’ Nazi past, launching a fact-finding mission that at first opened up more questions than answers, with the mystery deepening with each new revelation.

“Provenance research, particularly around Nazi-plundered works of art, is of paramount importance to the Museum and the integrity of our field,” said Mark Roglán, the Linda P. and William A. Custard Director of the Meadows Museum and Centennial Chair in the Meadows School of the Arts. “It is rare that such investigations are able to deliver definitive evidence that traces the history of a work of art. We are thrilled that we now have a more complete story behind our two treasured paintings, in addition to a wonderful detective story that illustrates the complexity of provenance research and the significant level of scholarly inquiry undertaken in this quest.”

Before Atzbach was able to trace the paintings’ lineage, she first had to correct a longstanding provenance error that had muddied the ownership history of two distinct sets of paintings depicting the Sevillian sister saints. Until recently, scholars had presumed that the two Murillo companion paintings at the Meadows Museum were those purchased in 1827 by the first Duke of Sutherland for his home in London. As the pair of saints in the Sutherland collection stemmed from the lauded collection of the Marquis of Villamanrique—a 17th-century patron and friend of Murillo—the two Meadows paintings until now had been mistakenly linked to the Sutherland paintings.

The wartime provenance of Saint Justa and Saint Rufina ultimately severed the narrative linking the Meadows and Sutherland pair. The letter “R” prefacing Nazi-assigned inventory codes (and matching codes on the back of each Meadows painting) led Atzbach to the Rothschild family, who owned the paintings when they were seized in Paris during the war. The trail to the Rothschild family was not, however, a clear path. Though Atzbach scoured numerous boxes of files filled with wartime claims from multiple members of the Rothschild family held at the diplomatic archives of the Ministry of Foreign and European Affairs in La Courneuve, north of Paris, these files revealed no trace of the Murillo pair either having been stolen or returned. Changing research tactics, Atzbach turned her focus to a comprehensive group of files with lists of property recuperated from Germany and arranged alphabetically by the owners’ last name. A perfunctory glance through what Atzbach presumed to be the “wrong” box of wartime claims unexpectedly revealed a Rothschild among the J-M dossiers: Baronne Antoinette Léonino (1894–1990). Léonino’s identity and connection to the Rothschild family was facilitated through a Post-It note on the front cover of Léonino’s files. Further research revealed that Léonino was the granddaughter of Gustave de Rothschild (1829–1911), co-manager of the Rothschild Frères banking business in Paris. Atzbach then located a list of Léonino’s looted property, which included descriptions of the two Murillo paintings.

Once Atzbach was able to establish the identity of the wartime owner of Saint Justa and Saint Rufina, she then turned to the question of the paintings’ restitution. Saint Justa was included in the first restitution of works to Baronne Léonino on May 7, 1946. Though the Nazi inventory number corresponding to “a painting by Murillo of a female saint dressed in yellow, with a jug and a palm frond” was mistyped on the restitution list as R 1121 (rather than R 1171), Atzbach determined that this was clearly a transcription error carried forward from hurried annotations on an inventory list of Léonino’s looted property included in the archival files at La Courneuve. Atzbach also gathered substantial corroborating evidence that indicates that Saint Rufina must also have been returned to Léonino prior to December 1947. Her findings are outlined in her article in the current issue of ARS, a bilingual arts and collecting magazine based in Madrid.

Two decades later, Léonino’s paintings were purchased by the Galerie Heim in Paris and subsequently from the Shickman Gallery in New York, where they were acquired by William B. Jordan, founding director of the Meadows Museum, in 1972, becoming cornerstones of the Museum’s collection.

“The dedication and persistence of Nicole Atzbach in resolving this mystery of attribution and provenance demonstrate the importance of research, particularly at an institution of higher education,” said Samuel Holland, Algur H. Meadows Dean of SMU’s Meadows School of the Arts. “In addition to elucidating the Nazi-era history of these two paintings, Atzbach also has created an opportunity for further examination of Léonino’s collection.”