Raymond Dowd is angry. He shoves a ream of paper several inches thick across a conference table in his midtown Manhattan office. The stack contains copies of property declarations by Jews from nearly 80 years ago. Tax documents aren’t the most thrilling read, but Dowd, a lawyer who has handled several World War II–era restitution cases, says the papers are essential to understanding how the Nazis stripped Jews of so much art. By making Jews declare what they owned, sometimes in exchange for travel papers, the Nazis were creating an inventory of their belongings. “This happened on a sunny day. Birds singing, Jews lining up, a blond chick with a typewriter typing this stuff up. No machine guns, no violence,” he says. “Some tax thing. That’s how it happened.”

The Nazis used those records of what Jews owned and similar methods to plunder their possessions, including an estimated 650,000 art objects. The thefts included Van Gogh’s Portrait of Dr. Gachet, Vermeer’s The Astronomer and Klimt’s gold-layered art nouveau masterpiece Adele Bloch-Bauer I. They also included a painting of a peasant woman with a flock of sheep, which now hangs in a wood-paneled room at the University of Oklahoma’s Fred Jones Jr. Museum of Art.

Painted by Camille Pissarro in 1886, Shepherdess Bringing in Sheep arrived at the OU museum in 2000 as part of a gift worth $50 million. In 2008, Sotheby’s appraised the painting at $1.5 million, and a school magazine once singled it out as a “breathtaking” highlight of the collection. It’s also a work the Nazis stole from a wealthy Parisian family. Their lone heir, a Holocaust survivor, spent her adult life searching for her Shepherdess. And now she wants it back.

“Billions of dollars—many, many billions—of works of art are still out there,” says Ronald Lauder, the philanthropist and Estée Lauder cosmetics company executive, who has been a leader in the mission to return art stolen by the Nazis. Despite massive efforts in Europe and the U.S. since World War II to reclaim the plundered assets, advocates say some 100,000 works remain missing—and that many museums are fighting to keep them from their rightful owners.

Those advocates have accused some of the world’s biggest museums, like the Museum of Modern Art in New York City and the Thyssen-Bornemisza Museum in Madrid, of stonewalling families, and paintings of dubious provenance hang quietly even in museums on American college campuses. OU and at least five other American colleges have faced claims against their museums: Yale, Princeton, Rutgers, Indiana University and Oberlin. Dowd says institutions use legal technicalities to block claims, often invoking the statute of limitations (the deadline to bring legal action), which for Nazi art theft varies by state and is typically three or four years after a person “reasonably” could have discovered where the art was. That means courts might turn Jewish claimants away, saying they are 70 years too late. “History is being buried because the courts are closing the doors,” Dowd says. “This is Holocaust denial.”

Prior to World War II, Shepherdess belonged to Théophile Bader, who co-founded the upscale department store chain Galeries Lafayette. It later went to Bader’s daughter Yvonne and her husband, Raoul Meyer. In 1940, around the time Paris fell to the Nazis, the Meyers stashed the painting and the rest of their art collection in a bank vault in southern France. But the Nazis accessed the vault a year later and seized the collection, which also included at least three Renoirs and a Derain. They hauled it back to Paris, where they operated a depot for their cultural plunders in a building near the Louvre Museum called the Jeu de Paume. Scholars have described the site, which once served as Napoleon III’s indoor tennis court, as a “concentration camp” for more than 22,000 stolen art objects.

Léone Meyer was born in late 1939, as war was breaking out. Her mother reportedly was a Parisian seamstress. Her father is unknown. She was just a few years old when her family was murdered at Auschwitz. Someone likely put her into hiding, says Pierre Ciric, her attorney, and she wound up in an orphanage near Paris. Somewhat like the plot of Annie, the wealthy Raoul and Yvonne Meyer, who had been in hiding during the war, adopted her in 1946. They also tried to reclaim all their stolen art. By 1952, the Meyers had chased down Shepherdess—it was in Switzerland. They sued its owner, but the court ruled against them because they couldn’t prove he had known the work was stolen when he acquired it. The dealer, who had a reputation for handling stolen art, offered to sell it to the Meyers, but they refused to buy something they already owned. 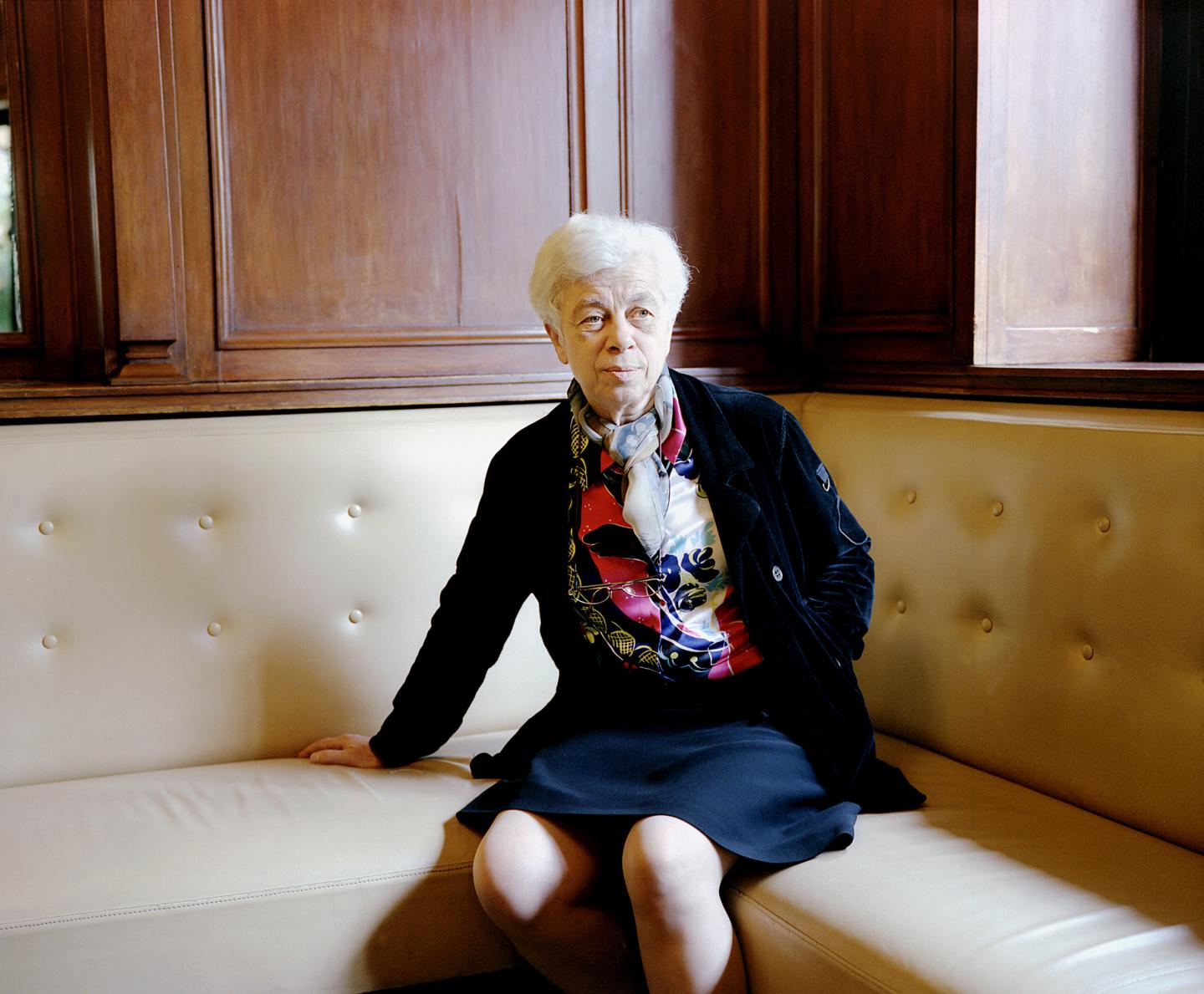 After her adopted parents died in the 1970s, Léone Meyer, Holocaust survivor and "Shepherdess" rightful heir, spent her adult life searching for the painting. Olivier Roller

Léone Meyer’s adoptive parents died in the 1970s, leaving her their sole heir. Then in her 30s, she felt that recovering the painting was a duty to both her murdered family and her adoptive one. But she had no idea where her Shepherdess was. After the Swiss court decision, the painting crossed the Atlantic and made its way to a gallery in New York City. In 1957, a wealthy woman from Oklahoma bought it. Clara Weitzenhoffer’s father and husband were Oklahoma oilmen, and she channeled her fortune into collecting English furniture, Chinese porcelain and paintings resembling her beloved Dalmatians. She also had a passion for impressionist art, says her son, Max Weitzenhoffer, a theater owner and producer in New York City and London. (He’s behind Harry Potter and the Cursed Child.) Max Weitzenhoffer says he got used to growing up surrounded by his mother’s art. “Nobody really thought these things had any value other than what she paid for them,” he says. “My father always said, ‘What are you going to do in time of war? You can’t eat them.’” Shepherdess was one of his mother’s favorites, and he recalls her keeping it in the living room next to her Van Gogh.

After his mother’s death in 2000, Weitzenhoffer finalized the donation of her art to OU, where he is chairman of the Board of Regents and his family is the namesake of the fine arts school. Within two months, more than 33,000 people viewed the 33-work collection, and daily museum attendance increased eightfold. The museum on OU’s Norman, Oklahoma, campus later built a new wing and installed the works in four rooms resembling the inside of Weitzenhoffer’s childhood home.

But around 2009, an associate curator at the Indianapolis Museum of Art discovered that the chain of custody for Shepherdess was questionable; the Holocaust Art Restitution Project learned of the finding and later published a blog post about it. Meyer’s son spotted the post in March 2012. Some eight months later, Meyer contacted University President David Boren and asked him to return the work. His response: The University of Oklahoma Foundation owned the painting, not the university. Finding that response unhelpful, she sued. 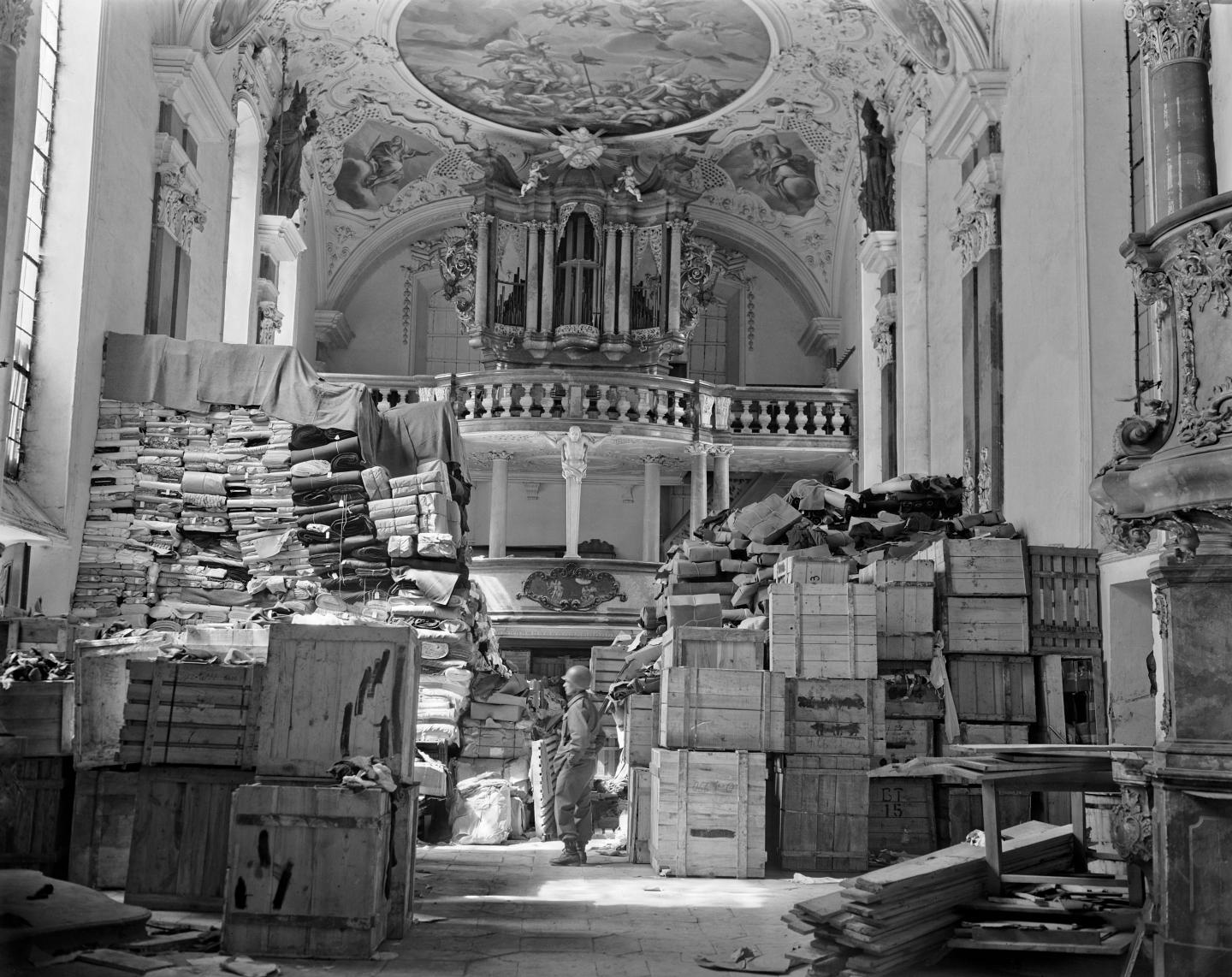 A U.S. soldier from the Third Army views stacks of Jewish-owned art looted by the Nazis and hidden in a church on April 24, 1945 in Ellingen, Germany. US Army Photo/Alamy

The lawsuit named Boren, the foundation and OU’s Board of Regents as defendants. OU hired Thaddeus Stauber, a lawyer who was then defending a Madrid museum that didn’t want to hand over another Pissarro to a Jewish family. In May 2014, Stauber convinced a judge to dismiss Meyer’s lawsuit on jurisdictional grounds, insisting she should have filed her complaint in Oklahoma, not New York, the sort of legal technicality that restitution advocates loathe. Meyer appealed, and it took another year for the case to restart in Oklahoma.

By that time, OU was getting hammered, and the case had spun into a public relations nightmare. “They were really dragging their feet,” says Oklahoma state Representative Paul Wesselhoft. “I can’t really comprehend why OU would not simply voluntarily give the painting up…. It’s terribly embarrassing.” Petitions against the university amassed hundreds of signatures, and an advocacy group hired an airplane to fly over an OU football pregame tailgate dragging a banner that read: “David Boren #ReturnTheStolenArt.” In May 2015, the Oklahoma Legislature passed a resolution demanding that the university clean up this mess, pronto.

But when Meyer’s case started again in Oklahoma, Stauber called for its dismissal based on the statute of limitations. So in late 2015, Ronald Lauder stepped in, writing to Boren and urging resolution. “At first, they did not want to give it up to the Meyer family,” says Lauder. “When we first started, it was really negative, and once we spoke...he did exactly the right thing.” A mediator affiliated with Lauder’s World Jewish Congress and Lauder negotiated the settlement, and the parties announced their agreement in February.

Having run the Galeries Lafayette for several years until 2005 and done humanitarian work as a physician, Meyer, who turns 77 in November, is now retired but still living in Paris, across the Seine from the Grand Palais. At long last, she will have her Shepherdess back. Kind of. Ciric, her lawyer, says the painting will return to France before the end of November. It will go on view for five years at an institution of her choice. Then it will rotate every three years or so between a French institution and the Fred Jones Jr. Museum. The ownership title goes to Meyer, and she will eventually gift it to a French institution “either during her lifetime or through her will,” according to a settlement document. Boren says he’s satisfied with the outcome: “I just wish we could have done it in a month instead of the time it’s taken.”

There may also be a happy ending for more Holocaust victims and their families, who could encounter fewer hurdles to reclaiming their art. In April, members of U.S. Congress introduced a bill that aims to eliminate the legal roadblocks museums use to hold on to works. The bill is now pending. Dowd, the restitution lawyer, calls the legislation “earth-shattering.” 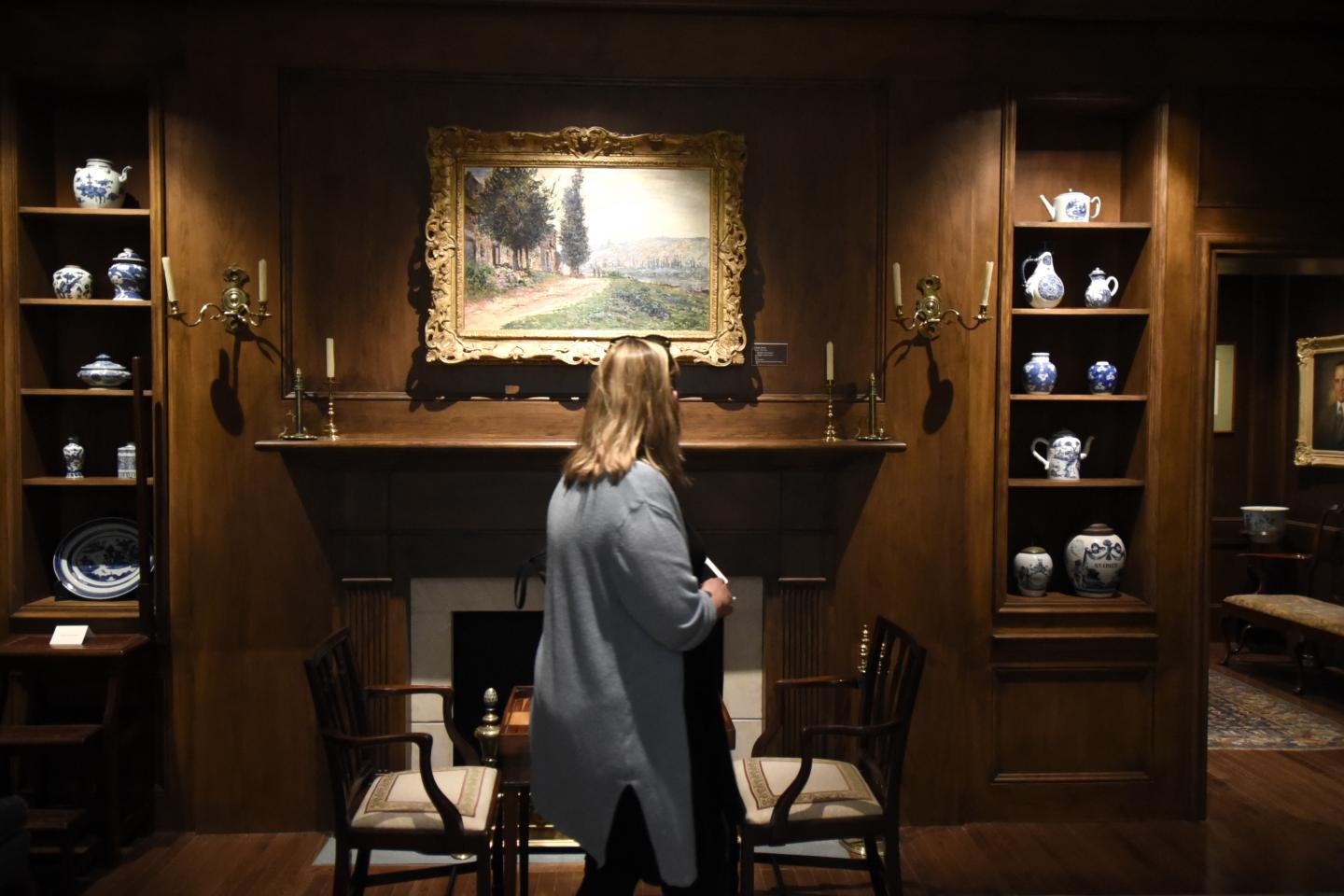 Claude Monet's "Riverbank at Lavacourt" at the Fred Jones Jr. Museum of Art at the University of Oklahoma allegedly has no ownership information before 1957. That painting also belonged to the Weitzenhoffer family. Nick Oxford

The ending of this tale might be less happy for OU. Representative Wesselhoft and others think the Fred Jones Jr. Museum’s Weitzenhoffer collection has additional art stolen from Jews. Meyer’s lawsuit noted that a Renoir was apparently sold by a collector fleeing Nazi Germany, a red flag. A work by Mary Cassatt allegedly lacks ownership information for 1939 to 1957. A Degas is allegedly missing information for 1918 to 1963. A Monet allegedly has no ownership information before 1957. Three other works are allegedly connected to a gallery the Nazis raided or to dealers who were known Nazi collaborators. At least seven additional paintings allegedly have little to no provenance information prior to the 1950s or 1960s, or at all. Museum Director Mark White says by email that they are making progress on filling in ownership history gaps, but “such research is an exhaustive process.”

Until their journey overseas is booked, Meyer’s Shepherdess remains on the wall in the Oklahoma museum. The room is a popular spot for marriage proposals, according to Boren, who knows of at least two there. Both asked said yes.