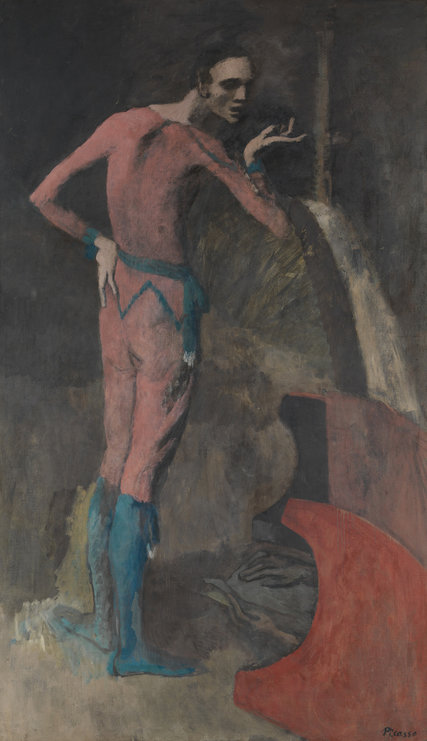 Picasso’s “The Actor,” from 1904–5, is at the heart of a lawsuit filed against the Metropolitan Museum of Art on Friday by the estate of a former owner.

The estate of a German Jewish businessman sued the Metropolitan Museum of Art on Friday in an effort to claim one of its most valuable Picassos, “The Actor,” asserting in court papers that the museum does not hold good title to the painting because the businessman was forced to sell it at a low price after fleeing the Nazis.

According to the filing in United States District Court for the Southern District of New York, the former owner, Paul Leffmann, had to sell his home and businesses in Cologne, Germany, before he fled with his wife, Alice, to Italy in 1937, as conditions in Europe worsened.

Before they left Italy for Switzerland, and finally fled to Brazil, he sold the painting in 1938, the lawsuit says. The sale was made under duress to the Paris art dealers Hugo Perls, a collector of Picasso’s work, and Paul Rosenberg, Picasso’s dealer, for $13,200, the suit says.

In 1941, Thelma Chrysler Foy bought the painting through New York’s Knoedler Gallery for $22,500, a price the estate says is evidence that the 1938 sale had been at a discount. She donated it to the Met in 1952, where it has been continuously displayed since.

The 1904-5 oil on canvas shows an attenuated male figure gesturing with his hands. The Met curators describe it as a “simple yet haunting” work that marked the beginning of Picasso’s interest in “the theatrical world of acrobats and saltimbanques.”

The lawyers for the estate — who estimate a value of more than $100 million for the painting — said in the court filing that the museum “did not disclose or should have known that the painting had been owned by a Jewish refugee, Paul Leffmann, who had disposed of the work only because of Nazi and Fascist persecution.”

The lawyers said they had negotiated with the Met for several years, while the Met investigated the claim, but they had never been able to reach a settlement.

“The Leffmanns would not have disposed of this seminal work at that time, but for the Nazi and Fascist persecution to which they had been, and without doubt would continue to be, subjected,” Lawrence M. Kaye of the law firm Herrick, Feinstein said in court papers.

In a statement, the Met strenuously denied there were grounds for the claim, asserting that the 1938 sale had been for fair market value and had not been made under duress. The amount the Leffmanns received was, the museum said, “a higher price than any other early Picasso sold by a collector to a dealer during the 1930s.” The Met said its ownership had never been questioned until Laurel Zuckerman, administrator of the Leffmann estate and great-grandniece of Paul and Alice Leffmann, approached the museum more than 10 years ago.

The museum also said the Leffmanns had made no claim on the painting after the war, when they did try to reclaim property they had been forced to sell.

Lawyers for the Leffmann estate criticized the Met, saying that for many years it had given an erroneous provenance for the painting, indicating that subsequent to Mr. Leffmann it had been owned by an unnamed German private collector until 1938, and that the Met corrected this only in 2011.

The Met said the provenance was not erroneous but was based on the recollection of the buyer Hugo Perls. It reflected the fact that the painting was owned by a German in Switzerland and was updated when more information became available, it said.