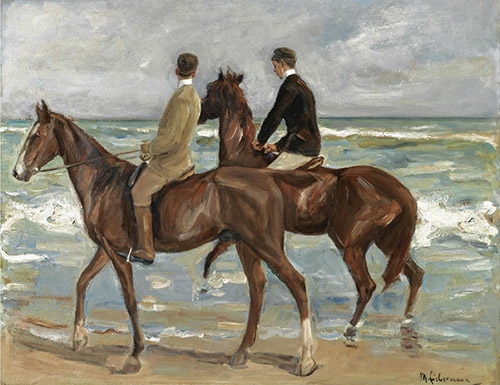 “Two Riders on the Beach” (pictured above) had ended up in the collection of the son of the infamous Nazi art dealer, Hildebrandt Gurlitt 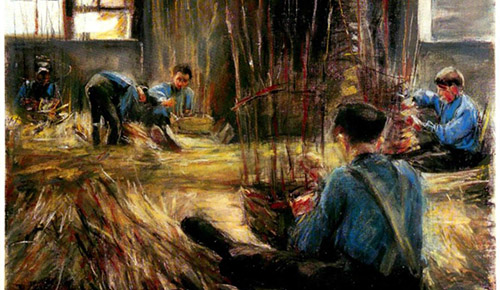 Finally, two Max Liebermann paintings “Two Riders on the Beach” and “Basket Weavers” were also looted. Because Mr. Toren was successful in previously obtaining the return of Two Riders on the Beach, that painting is not part of the lawsuit. Even without including that painting that was recently sold at auction for approximately $2.5 million, the Complaint claims that the present value of the looted items is well in excess of $10 million.

The Complaint, filed by Weisbrod Matteis & Copley PLLC, seeks relief “for the genocidal expropriation of property.” It alleges that the Defendants, the legal successors to the Nazi regime of Adolf Hitler, and various Nazi ministries, were involved through the Gestapo in the looting of all of the property of Mr. Toren’s great-uncle David Friedmann from his house in Breslau, which was then part of Germany.

The allegations are partly based on a recently-discovered inventory of Mr. Friedmann’s property, prepared at the direction of a high-level Nazi official. The inventory list required 10 pages and enumerated 306 art objects, of which 54 were paintings. The inventory list included the identity of each object, and in the case of the paintings, the name of the artist, the name of the painting, and its dimensions. Toren is a lawful heir of David Friedmann.

David Toren left Germany at the age of 14 on a “Kindertransport “ in August 1939, a few days before the beginning of World War II. He never saw his parents again, who died in the gas chambers in the Auschwitz death camp in 1943. At the time he left Germany for Sweden, where he spent the war in an orphanage, he lacked any interest in art and had no knowledge of the particulars of his great-uncle’s collection, other than remembering that Two Riders on the Beach was prominently displayed in Mr. Friedmann’s villa in Breslau.

After learning at a press conference in Augsburg, Germany on November 5, 2013, that Two Riders on the Beach had ended up in the collection of the son of the infamous Nazi art dealer, Hildebrandt Gurlitt, Mr. Toren hired researchers who discovered information that determined for the first time since the artworks were looted the true extent of David Friedmann’s art collection.

The Complaint attaches a number of copies of Nazi era documents that irrefutably establish that the Gestapo stole David Friedmann’s artworks and securities. For example, a letter from the Nazi leadership directed Karl Hanke, district president of Breslau, to obtain an inventory of David Friedmann’s art collection.

Hanke then wrote to David Friedman and required that he cooperate in the preparation of the inventor list and that he pay the fee of the art and antique dealer. He also warned Mr. Friedmann not to sell or to dispose of any of his art objects. Hanke then authorized an art dealer to catalogue Mr.Friedmann’s collection, which he did. A copy of the inventory is also attached to the Complaint.

Prior to the filing of this lawsuit, Mr. Toren attempted to settle this case by writing to a number of the Defendants, but has not received a response, despite there being no doubt that the Gestapo looted the artworks and securities from David Friedmann, and that Mr. Toren is an heir to David Friedmann.

WMC represents corporate and individual plaintiffs in lawsuits and trials against defendants that have breached their contracts, committed fraud, stolen intellectual property, and engaged in other commercial and financial misconduct.  The National Law Journal selected Weisbrod Matteis & Copley as one of the 10 hottest litigation boutiques in the country in 2014.