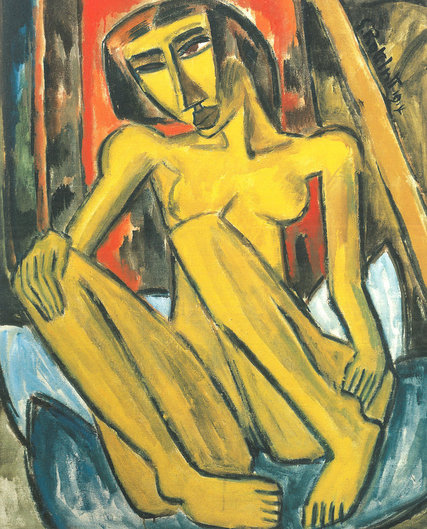 The Neue Galerie of New York has reached a restitution settlement for “Nude,” a 1914 painting by Karl Schmidt-Rottluff, with the heirs of a Jewish shoe manufacturer and art collector whose artworks were taken when his wife and son were forced to flee Germany by the Nazis in the 1930s, the museum announced Tuesday.

The museum said it had returned the painting to the family of Alfred and Tekla Hess and then bought it back at its current fair market value. No price was given for the repurchase of the painting, which the Neue Galerie bought at auction in 1999, but other works by the artist have recently sold for more than $1 million.

The Neue Galerie, a museum in Manhattan that focuses on art created in Austria and Germany from 1890 to 1940, was co-founded by Ronald S. Lauder in 2001, largely from art donated from his collection and from that of his friend, Serge Sabarsky, an art dealer and expert on German and Austrian Expressionist art who died in 1996.

Mr. Lauder, an heir to the cosmetics fortune of his mother, Estée Lauder, has championed the restitution of art plundered in Europe during World War II and is working to get legislation on the issue through Congress. He is chairman of the Commission for Art Recovery, which negotiates with governments, museums and other entities to retrieve art wrongfully taken from Jews by the Third Reich and its allies.

Yet he faced criticism for more than a decade from other restitution advocates and scholars who said that he was not sufficiently transparent in detailing the provenance of works within the holdings of the museum and his own private collection.

The restitution agreement with the Hess heirs is the fruit of renewed efforts by Mr. Lauder to trace the origin of works he and the museum hold. Mr. Lauder has previously returned three works from his personal collection because of concerns over their rightful ownership. The Schmidt-Rotluff “Nude” is the first work with a clouded history returned by his museum, according to the museum.

Research by the museum and the Hess heirs found that the painting, and other works from the same collection, disappeared from storage at the Cologne Art Association after Tekla Hess, the widow of Alfred Hess, a collector of Expressionist art, fled to Britain in 1939.

Agnes Peresztegi, a Paris-based lawyer and expert on Holocaust-era property claims who is general counsel for the Neue Galerie, said the Hess family had approached the museum a little over a year ago. She said that when the museum bought the painting, there had been no indication in the provenance presented by the Berlin auction house that the painting had been looted.

Ms. Peresztegi said research efforts were aided by the availability of additional German archives, more fully showing the extent to which the Hess family collection had been pilfered. “This case is an example of how provenance research has evolved and how much more we know today than we knew 20 years ago,” she said.

Mr. Lauder’s office did not make him available for comment.

Ms. Peresztegi had been asked by Mr. Lauder to seek more information on his own and the museum’s holdings, including more detailed provenances, and she said her review would lead to updated, clarified information on the museum’s website in coming months. She also said the research was continuing.

“I don’t see more restitutions right now in the pipeline, but it does not mean there will be nothing ever discovered,” she said. “We are doing the research. We have to fill all the gaps.”

David J. Rowland, a lawyer for the Hess heirs, who live in Britain, said they had made other successful restitution claims, perhaps most prominently, recovering a painting by Ernst Ludwig Kirchner, “Berlin Street Scene” from a Berlin museum about 10 years ago. The work was subsequently sold at Christie’s to Mr. Lauder and the Neue Galerie.

A joint statement released by the museum and Mr. Rowland said that the Hess family “commended the professional and transparent manner in which the Neue Galerie has handled this matter.”