Cologne to return Menzel drawing sold in 1939 to Hildebrand Gurlitt

City says drawing was sold under duress, probably to fund escape to US by couple persecuted by the Nazis 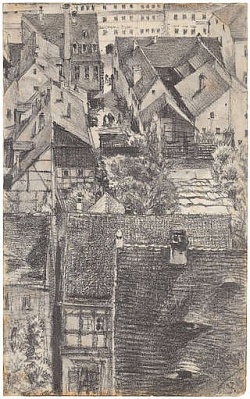 The city of Cologne has said it will hand over a drawing by Adolph von Menzel that the art dealer Hildebrand Gurlitt purchased in 1939 from a woman who fled Nazi Germany with her Jewish husband.

The drawing, Blick über die Dächer von Schandau (View over the Roofs of Schandau), was purchased for the Wallraf-Richartz Museum’s collection in 1939. Gurlitt bought the drawing from Elisabeth Linda Martens, whose husband was classified as a Jew under the Nuremberg laws and fired without pension from his position as a judge in Hamburg in 1933. The couple subsequently emigrated to the US.

“We can presume that the sale of the drawing financed their escape,” the city of Cologne declared in a statement. “The city council decided to return the drawing to the descendants.” Tracking down Martens’s heirs required extensive investigation in a project partly financed by the German Centre for Lost Cultural Property.

Gurlitt’s personal collection made headlines in 2013, when it was revealed that his son Cornelius Gurlitt hoarded valuable artworks inherited from his father in his Munich apartment for decades. Some had been stolen from Jews or acquired under duress.

Hildebrand Gurlitt had bought works of art in occupied France and Holland for Hitler’s planned Führermuseum in Linz. He purchased many works from Jews who were in desperate straits, including three sets of drawings by Menzel from members of the same family. The German government task force investigating the Gurlitt collection last year recommended that another Menzel drawing should be returned to the heirs of Elsa Helene Cohen, the mother-in-law of Elisabeth Linda Martens.

Cornelius Gurlitt’s collection has been in legal limbo since his death. He bequeathed it to the Kunstmuseum Bern, but his cousin Uta Werner challenged his mental capacity to make a will. A hearing on 27 September at a Munich court will consider reports commissioned by the court, the Kunstmuseum and Werner examining Gurlitt’s state of mind when he wrote his will. A decision is expected in the coming weeks.