The looted art battle of the century 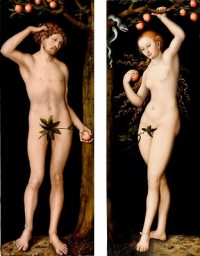 Adam & Eve, by Cranach the Elder

Adam and Eve are in the news again - or, at least, two medieval paintings of the biblical progenitors of the human race are, whose ownership has been contested for a century by noble families, governments, museums and batteries of lawyers.

The tall, seductive paintings of Adam and Eve on two separate, 6ft-tall panels, are the work of the German Renaissance painter Lucas Cranach the Elder.

Another chapter in the painting's stormy history was added last month in Los Angeles, when US District Court Judge John F Walter ruled that the two paintings, now valued at about $24 million, rightfully belonged to the Norton Simon Museum in Pasadena, where they have been on display since 1971.

In the early 1900s, Adam and Eve were owned by an aristocratic Russian family, but were seized after the 1917 Russian revolution by the Soviet regime. In 1931, the Soviets sold the Cranach at a Berlin auction to Dutch-Jewish art dealer Jacques Goudstikker. When Germany invaded Holland, Mr Goudstikker fled, leaving behind more than 1,000 artworks.

No less an art collector than Hermann Goering, the Third Reich's second-in-command, grabbed Adam and Eve for his country estate near Berlin. After the war, Allied forces recovered the painting and returned it with other art works to the Dutch government.

On a parallel track, Mr Goudstikker, the Dutch-Jewish art dealer, was killed in an accident while fleeing the Nazis, leaving behind a son, Edward von Saher. The latter married Marei Langenbein, a German ice skater.

At this point, the Russian nobleman reappeared and reclaimed the works, which he sold in 1971 to Jewish industrialist Norton Simon for his museum.

Mr and Mrs Von Saher moved to Connecticut. After the death of her husband, Marei von Saher entered the court battle in the late 1990s to recover the Cranach painting, taken from her late father-in-law Jacques Goudstikker.

Earlier this year, lawyers for the Norton Simon Museum dug up records showing that the father of plaintiff Marei von Saher had been admitted to the Nazi Party. Whether an earlier discovery of this information might have influenced the outcome of the case is a matter of speculation. What is certain is that Judge Walter's ruling in favour of the museum will be appealed by Ms Von Saher. This complex story is not over yet.