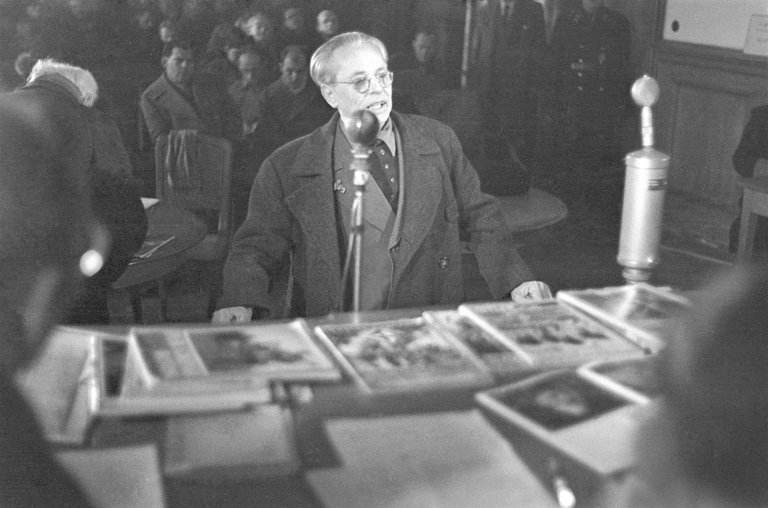 Heinrich Hoffmann, who was Hitler’s personal photographer, after World War II. According to archival documents, he sought to claim a list of 278 paintings that had been confiscated by units like the Monuments Men, an Allied group devoted to recovering and returning looted art.

MUNICH — Years after World War II, American officials here entrusted more than 10,000 confiscated artworks to Bavarian authorities to return to the rightful owners, many of them Jews whose property had been plundered.

But new research in the yellowing archives here make clear how relentlessly Nazi families pursued the Bavarian officials, badgering them, often successfully, to return art they brazenly continued to view as their property.

Hitler’s private secretary, Henriette von Schirach, and her family pleaded with officials of the Bavarian State Painting Collections to turn over nearly 300 works, including a small landscape, “View of a Dutch Square” by the Dutch artist Jan van der Heyden.

Before the war, the painting had been owned by Gottlieb and Mathilde Kraus, Jews who fled their Vienna penthouse, leaving behind a carefully packed collection of art that was then confiscated by the Gestapo in 1941.

Mrs. Von Schirach persuaded the Bavarians to give it back to her for a pittance — 300 Deutschmarks, which was roughly $75 then or nearly $600 now.

“The basic element of this story is this: They stole from my family,” said John Graykowski, 62, the Krauses’ great-grandson, “and then they gave it back to the guy who stole it from them. How does that work?” 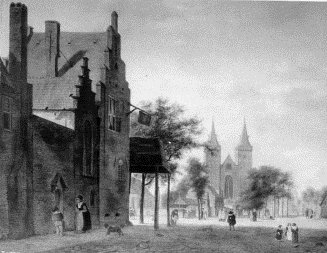 The small oil painting “View of a Dutch Square,” apparently from the studio of the Dutch artist Jan van der Heyden in the late 17th century.

It turns out, the archives show, that hundreds of works were actually sold back at discounted prices in the 1950s and the 1960s to the very Nazis who had taken possession of them, including the widow of Hermann Goering, a senior aide to Hitler who pillaged art to amass a collection of more than a thousand works.

This murky chapter of history came to light because of Mr. Graykowski’s search for some 160 missing works from the Krause collection. In 2009, Mr. Graykowski, a Virginia lawyer, enlisted the help of the Commission for Looted Art in Europe, a London-based nonprofit that researched the archives for him and made key discoveries.

Anne Webber, a founder of the commission, said her researchers concluded that the resale of looted art to Nazi-tied families had hardly been isolated. “They called them a ‘return sale,’” she said. “Why were they returned to them rather than the family from whom they were looted? Nobody knew.”

The return sales to Nazi families — first reported in late June by the Munich daily Süddeutsche Zeitung — is also causing political recriminations. This week, a Bavarian state Parliament committee demanded an accounting from government officials about the extent of the system to resell art to Nazi families and a tally of how many looted works remain in government possession that could be returned to the proper heirs.

Mrs. Von Schirach’s grandson Ferdinand von Schirach — a best-selling German author whose grandfather was imprisoned for 20 years for the deportation of more than 60,000 Austrian Jews — is also pledging to investigate the provenance of his late grandmother’s art.

“We need to know about the evil,” he said. “That’s the only way we can live with it.”

The discreet art trade with Nazi relatives emerged in 1949, four years after the war, when the American military transferred responsibility for restitution of looted works to the West Germans and Austrians. Munich became the hub of a network of art dealers and state officials who had helped drive Nazi looting and then after the war fostered trafficking in those works.

The painting collection’s archives illustrate in great detail the efforts by families like the von Schirachs to retain the art. The family patriarch was Baldur von Schirach, a Nazi governor in Vienna who was tried for war crimes in Nuremberg. While he was imprisoned in Spandau, his wife, Henriette, and relatives worked for more than a decade to reclaim art, carpets and furniture. 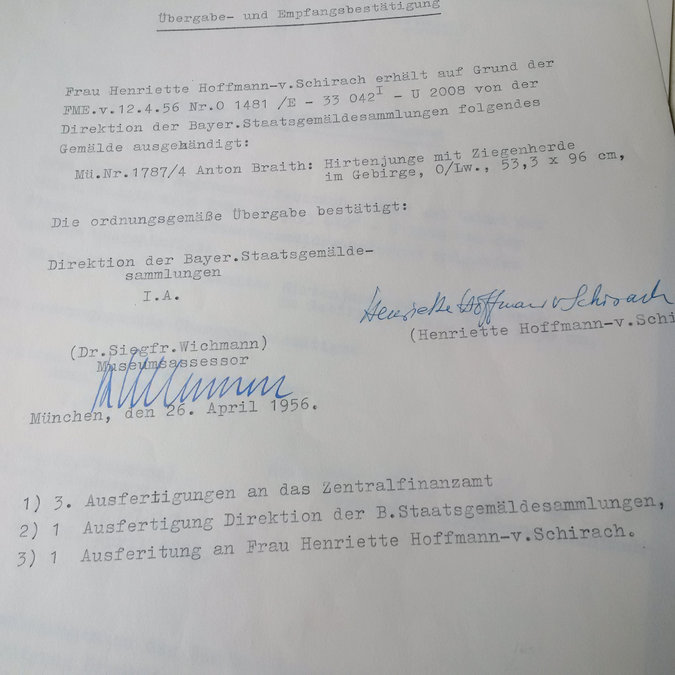 In a letter to a senior Bavarian official who had resisted her entreaties, Henriette von Schirach — whose husband sent 60,000 Austrian Jews to their deaths — begged for the return of art that had belonged to her family. “I ask you, dear Herr Direktor, to agree to my request,” she wrote.

According to archival documents, her father, Heinrich Hoffmann, who was Hitler’s personal photographer, sought to claim a list of 278 paintings that had been confiscated by units like the Monuments Men, an Allied group devoted to recovering and returning looted art.

But the Americans were suspicious of him, according to one investigator who said in a 1945 document that “the interrogation of Hoffmann is a thankless task.” The investigator added,“He is an alcoholic and has all the weaknesses which go with this vice.”

Mrs. von Schirach tirelessly continued the efforts, chasing the mostly German artworks. By 1953, at least 89 works had been promised to the family. By 1957, her brother had recovered 170.

In one example of her zeal, Mrs. von Schirach got back a table after persuading a Munich antique dealer to testify in 1954 that she had purchased it from his store in 1932.

Robert M. Edsel, whose 2009 book, “The Monuments Men,” inspired a movie by that name starring George Clooney, said he was not surprised by the secret sales.

“This is the problem for countries, universities, private individuals or auction houses that just want the Nazis era issues to go away,” he said. “The more they avoid transparency, the more it refuels interest and frustration. Why does it matter so many years later? It’s stolen.”

Jonathan Petropoulos, a historian at Claremont McKenna College in California who studied the postwar Munich art network, said the Bavarians failed to follow promises to the Americans that they would find the rightful owners of the art. “Officials from both governments said they would continue to conduct research, but this scarcely happened, at least, for many decades,” he said. 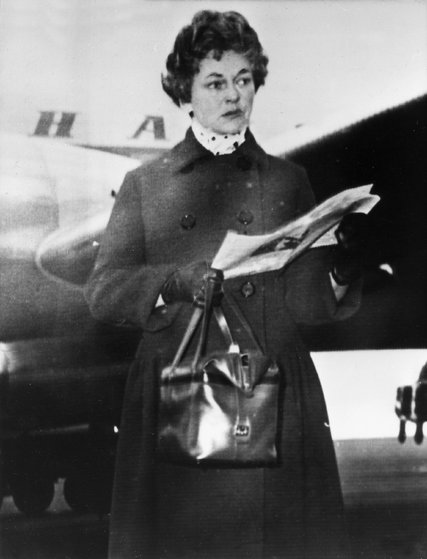 In the Graykowski case, the researchers found that the late 17th century oil painting “View of a Dutch Square,” apparently from van der Heyden’s studio, had passed through the official collecting points in postwar Munich where the Monuments Men gathered looted art for restitution.

In 1962, the state museum sold it and a 17th-century landscape from the Kraus collection to Mrs. von Schirach.

The current owner of the Dutch oil painting is the Catholic Cathedral Association of Xanten in North-Rhine Westphalia in Germany. It said it purchased the work in 1963, a year after Mrs. Von Schirach recovered it at an auction in Cologne for 16,100 Deutschmarks, which was about $4,000 then or around $31,000 at today’s rates — 50 times what she had paid for it.

Its current value is unclear, but it is similar to another work of a cathedral square by van der Heyden that hangs in the Louvre in Paris.

Hans-Wilhelm Barking, the cathedral association’s chairman, said that the group is willing to negotiate a return to Mr. Graykowski and his family if certain “requirements are met.”

But the two sides are in a stalemate. The Kraus descendants disagreed over the choice of a mediator and the association’s demand for some sort of a return on its investment. Mr. Barking said they were still waiting for a notarized list of the Kraus heirs. Mr. Graykowski, the great-grandson, said that the material had been sent and that the church association was stalling.

Mr. Graykowski said he hoped his family’s story would weigh on private collectors with problematic works. His great-grandparents were elderly when they moved to the United States, he said, and so scarred by their losses in Vienna that they refused to speak in German.

“Maybe people will feel the moral weight to come forward,” he said. “My grandmother was an artist, and her paintings are on the list of stolen works. So someone has my grandmother’s painting in their parlor. I never met her. I wish I had this piece of her.”