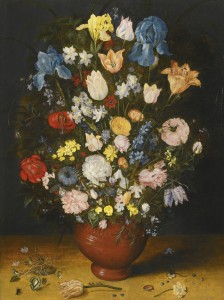 A little-discussed restitution of a still life by Jan Brueghel the Elder (1568-1625) led to an important sale at Sotheby’s London last night. The work, Still Life of Flowers in a Stoneware Vase, had once belonged to Baron Alphonse von Rothschild and had been kept at his castle in Schillersdorff, Silesia (now Silherovice, Poland). A forced transfer in the Nazi period removed the work from the family’s collection in 1939. The piece then ended up at the Narodnie Gallery in Prague, where it remained until 2016, when a settlement with the Rothschild heirs brought about the return of the work to the family.

It fetched £3.8 million at Sotheby’s last night, comfortably within the pre-auction estimate of £3 to £5 million.