Looted art sold to Nazis’ families after the war

Charged with returning Nazi-looted art to its proper owners or heirs, the Bavarian post-war administration actually returned some art to the Nazis who stole it, an investigation has revealed.

Journalists from Suddeutsche Zeitung and investigators from the London-based Commission for Looted Art in Europe have discovered that, after the USA post-war administration left the job of restitution to the Germans, the Bavarian State Collection failed to seek rightful heirs.

The family of Czech Jews Gottlieb and Mathilde Kraus, represented by the commission in London, found out that the Bavarian authorities sold paintings owned by their ancestors for a tiny fraction of their value to Henriette (née Hoffmann) von Schirach, daughter of Hitler’s official photographer, Heinrich Hoffmann, himself an art collector.

Gottlieb Kraus was the Czech consul in Vienna.

Henriette von Schirach quickly resold one of the works, Dutch Square (1692) by Jan van der Heyden, to the Xanten Cathedral, in the Lower Rhine, for a huge profit. It was on display in the cathedral until 2011. 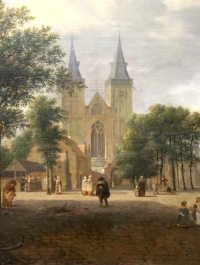 Anne Webber, co-chair of the commission, said in a statement: “It seems that Bavaria thought restitution meant restitution to the Nazis rather than to their victims.” She said the cathedral administration had not responded to requests for restitution.

Among the high-ranking Nazi families that tried to get artworks from the Bavarian administration after the war were those of Hermann Goering, Heinrich Hoffmann, Martin Bormann and Julius Streicher, according to Ms Webber.

While ministers in the Bavarian government often dealt with their demands promptly and efficiently and without stringent checks on ownership, the families who had their art stolen saw their claims thrown out or impossible hurdles created to prevent them recovering their artworks, Ms Webber said, adding that the families were experiencing the same barriers today.

Ms Webber’s organisation is demanding that all artworks in German collections whose provenance is problematic be published, and that all relevant records be opened, so that families have a chance of finding their missing paintings.