London 27 June 2016: Germany returned Nazi-looted art to the high-ranking Nazi families who stole it rather than to the families from whom it was taken. The London-based Commission for Looted Art in Europe (CLAE) has discovered this remarkable scandal which has been covered up by Germany for decades.

The family of the late Gottlieb and Mathilde Kraus of Vienna, represented by CLAE, who are still trying to recover their 160 looted paintings, had good reason to think two of their paintings would be in the state-owned museum in Munich, the Bayerische Staatsgemaeldesammlungen (Bavarian State Paintings Collections). Records show they were handed over to Bavaria by the USA in 1952 for the purpose of restitution. To their shock, they found they had instead been given by the Bavarian State in the early 1960s to Henriette Hoffmann-von Schirach, daughter of Hitler’s close friend and photographer, Heinrich Hoffmann, and wife of the notorious Gauleiter of Vienna, Baldur von Schirach. Von Schirach was condemned at Nuremberg for crimes against humanity for the deportation of 60,000 Austrian Jews.

Anne Webber, Co-Chair of CLAE, said CLAE’s research shows that in the 1950s and 1960s Henriette Hoffmann-von Schirach recovered scores of paintings from Bavaria. It seems that Bavaria thought restitution meant restitution to the Nazis rather than to their victims.

Among the high ranking Nazi families negotiating to get back art, some of it looted, were the Goering, Hoffmann, Bormann, von Schirach, Frank and Streicher families. In many cases they negotiated directly with the Director of the Bavarian State Museums and Ministers in the Bavarian government. While their demands were dealt with promptly and efficiently and with little requirement to prove their claims of ownership, the looted families had their claims thrown out or impossible hurdles created to prevent them recovering their artworks. The families are still experiencing the same barriers to recovery of their looted works of art today.

One of the two Old Master paintings handed over to Mrs Hoffmann-von Schirach in 1962 in exchange for the paltry sum of 300 Deutsch Marks, was sold by her the following year for 16,100 Deutsch Marks to the Catholic Cathedral Association of Xanten in Germany’s North-Rhine Westphalia.

In July 2011, on behalf of the Kraus family, CLAE made a claim to Xanten for the painting, providing extensive proofs of its shocking history: looted by the Gestapo in Vienna in 1941 from the collection of Gottlieb and Mathilde Kraus; acquired in Vienna with other paintings from the Kraus collection by Heinrich Hoffman through the good offices of his son-in-law Baldur von Schirach; found by the Allies at the end of the war; returned to Bavaria by the US with the restitution obligation; and then returned to Mrs Hoffmann-von Schirach in 1962 on the flimsiest of grounds.

Despite the Cathedral of Xanten publicly proclaiming its proud ‘anti-Nazi’ past, it seems this attitude does not extend to property stolen from Jewish families. In the five years that CLAE has been trying to achieve an amicable settlement, the Cathedral Association, of which the local Bishop is part, has not once acknowledged the historical injustice perpetrated on this family or the persecution it has suffered. It has provided no documentation of any kind, nor a single proof of evidence of a good faith purchase. It has locked away the painting and only and repeatedly denied settlement of the claim on the grounds that it must have “an index linked return on its investment” of 1963.  The last settlement offer by CLAE was made in September 2015 when the family stated their wish that their claim to be resolved by the end of October 2015. Anne Webber said there has only been silence from Xanten in the nine months since.

CLAE’s several requests for an explanation of the post-war ‘return-sales’ to the Nazi families, made to the Bavarian State Museums, the Bavarian State government and the German Foreign Ministry, met with equal lack of success, as did its requests for documentation. CLAE was told that there were only four documents consisting of five pages in total. CLAE embarked on its own research, uncovering hundreds of pages of records and this scandalous history. 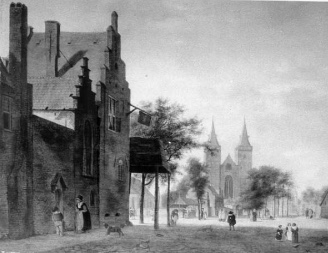 
CLAE is now calling for a full accounting of these shameful transactions with the high-ranking Nazis and the way they have been hidden, as well as for three essential changes in the way Germany handles research and restitution:

1. Lists of all artworks in German collections whose provenance is problematic must be published so families have a chance of finding their missing paintings; there can be no more waiting for individual item provenance research to be done first;

2. All relevant records must be open and accessible. In particular, the records of the Bavarian Museums must be handed over to the State Archives in accordance with German law;

3. Germany must create a single, fair, transparent and accountable claims process that applies to all collections throughout Germany, at both federal and state level, so that all families can be confident their claims will be dealt with justly.

Germany already made these commitments 18 years ago at the Washington Conference on Holocaust-Era Assets, but has not implemented them.

Without total transparency and accountability, the victims of the Nazi looting will continue to be denied the justice that is so long overdue.

About Gottlieb and Mathilde Kraus

Gottlieb Kraus (1867-1952) and his wife Mathilde Kraus (1873-1954) were prominent members of Viennese society. Gottlieb Kraus was a businessman and honorary consul for Czechoslovakia in Austria. Beginning in the early years of the 20th century, he and his wife assembled a notable art collection of over 160 paintings, and their apartment was opened as a public museum to display it publicly in 1923.

Gottlieb and Mathilde, together with their daughter Marie, fled Vienna soon after the Nazis took power in March 1938.  Their flight took them via Prague, Brussels, England and Canada, before they were eventually able to settle in Washington DC. They discovered after the war that all the collection left in Vienna had been seized by the Nazis in 1941, some  selected for Hitler’s Linz Museum. Their daughter Marie made unsuccessful efforts over decades with both Germany and Austria to find and recover their possessions, but was blocked at every turn. These efforts were continued after her death in 1997 by the several grandchildren and great-grandchildren of Gottlieb and Mathilde.


About the Commission for Looted Art in Europe

The Commission for Looted Art in Europe (CLAE), is an international, expert and non-profit representative body which negotiates policies and procedures with governments and cultural institutions and promotes the identification of looted cultural property and the tracing of its rightful owners. It represents families from all over the world, acting on their behalf to locate and recover their looted artworks. It has been instrumental in the return to its rightful owners of over 3,500 items of looted property since it was set up in 1999. It also provides a Central Registry of Information on Looted Cultural Property 1933-1945 at www.lootedart.com to fulfil Washington Principle VI which called for the creation of such a repository of information.


For interviews with the Kraus family and Anne Webber and for further information and high resolution images, please contact: