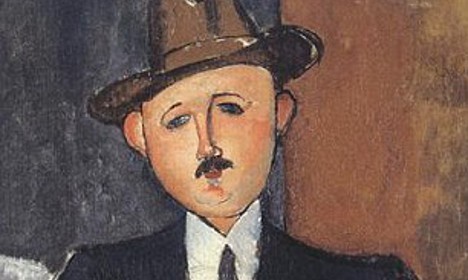 Detail of Modigliani's Seated man with a Cane. Photo: AFP

The owner of a Modigliani painting allegedly looted by the Nazis has insisted there is no proof it was taken from a Jewish art dealer, after the Panama Papers leak led to it being briefly seized.

Authorities in Geneva sequestered the painting in April after the release of millions of documents from law firm Mossack Fonseca revealed the identity of the portrait's current owner, billionaire art dealer David Nahmad, through his offshore company.

Swiss authorities looked into the case before indicating last month that the painting, worth an estimated $25 million, could be returned to Nahmad.

Mondex Corp, a Canadian group that helps track looted assets, says the work belonged to British art dealer Oscar Stettiner, a Jew who fled Paris in 1939 prior to the Nazi occupation.

But Nahmad, who is himself Jewish and says he could never accept art looted by the Nazis, says there is no concrete evidence that Stettiner was ever robbed of the work, or even owned it.

According to documents given to AFP by Nahmad's associates, a Modigliani self-portrait was mentioned in a 1947 legal claim to three works owned by Stettiner in the aftermath of the Allied liberation of Paris.

But the 1918 work owned by Nahmad -- "Seated Man with a Cane", which shows a mustachioed figure in a suit and hat -- is not considered a self-portrait.

Mondex, convinced that Stettiner's Modigliani is the one currently in Nahmad's possession, has since 2011 been appealing to US authorities to help the late Briton's grandson get it back.

But US authorities struggled to determine the identity of the current owner.

The Nahmad family told a US court they were not the owners, and that it belonged to the International Art Center, a company set up by Mossack Fonseca.

But the leak revealed that Nahmad was the sole owner of the company.

Nahmad and his family, based in New York, have made a fortune from art-dealing and currently own around 4,500 pieces, including 300 Picassos worth at least $1 billion, according to Forbes magazine.