Factual clarity and the missing Modigliani

Thanks to the release of the Panama Papers last month, more has been leaked in relation to the dispute involving Modigliani’s Seated Man with a Cane (the painting shown below, reputed to be worth £15 million), which places the current owner, a company named the International Art Center, against a descendant of Oscar Stettiner, the Parisian dealer from whom the painting is reputed to have been taken during the Nazi occupation of France. The crux of the dispute is whether the painting held by the company is indeed the same that had been in the Stettiner collection before the Second World War. 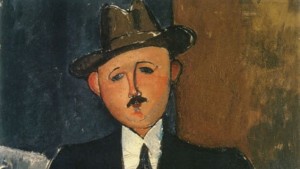 Material that came out with the Panama Papers had caused a stir in April when leaked documents revealed that the sole shareholder of International Art Center was none other than Davide Nahmad, head of the well-known art dealing and gallery-owning Nahmad family. This was made known in a number of sources, including an elucidating (in more ways than one) report by The Fifth Estate news programme in Canada. The revelation was then followed at the end of May by court documents originating from a member of the family that had sold the painting to the International Art Center through Christie’s in 1996 affirming that the painting had come from a sale in Paris in 1944, the same sale at which Stettiner’s Modigliani was reputed to have been sold. And so it now looks to be almost certain that we are dealing with the same work. But whether this means that it will be restituted is still another matter…

What this case shows is how much can rely on evidence. Much can be said about the law as it relates to Holocaust-looted art, especially in regards to limitation periods and questions of title, but in many instances the result will turn on the facts. Is this the same painting that went missing in the 1940s? Or is it another version of the same subject by the artist? Is it a copy? A factual determination will have to be made in each instance, rather than a legal one, and this determination will almost certainly determine the outcome of a dispute.