Chopin, the Nazis, and the Spanish piano

April
University of Melbourne 20 May 2016

This is an edited extract from the Miegunyah Lecture 2016, Chopin’s Piano: A Path through the Romantic Century, delivered by Dr Kildea on 19 May, 2016

The instrument used by the virtuoso pianist to compose his Preludes had a life, and surprising afterlife, of its own

The eminent pianist Wanda Landowska departed Barcelona on 27 January 1911, sailing the 160 miles due south to Palma without incident. In the 70-odd years since Chopin and his lover George Sand had traversed the exact same route the journey time had been shaved by ten hours.

Because of her Polish heritage, her love of Chopin and her debt to her teacher Aleksander Michałowski (who had studied with Karol Mikuli, himself a pupil of Chopin), on 31 January 1911, after concerts in Palma, Landowska made a pilgrimage to the monastery at Valldemossa in which Chopin and Sand had spent the winter of 1838/39.

In the cell where Chopin had worked and slept, she found a piano made by Juan Bauza, which had been there, barely touched, for more than 70 years. She arranged to buy it – as a relic, of course, but also because she knew it was midwife to one of the greatest collections of piano miniatures ever written – the Preludes. 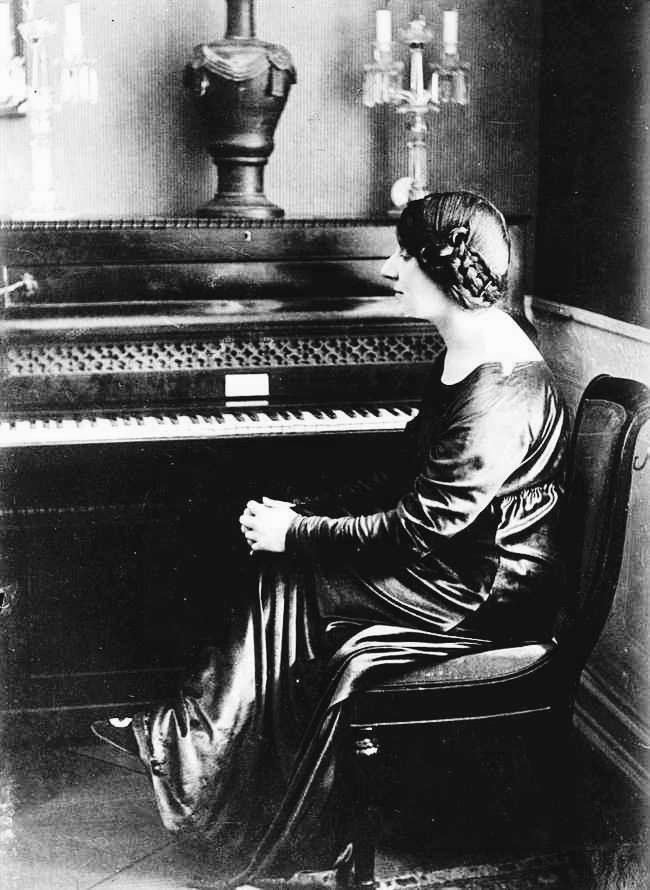 Almost everything we know about Bauza’s instrument comes from a 1913 photograph (above) of Landowska, taken in Berlin: the piano’s height, the lattice-like inlay above the keyboard, the exposed strip of whippens - or stickers beneath the keyboard - looking like a row of teeth and indicating that it folds up on a hinge, the attractive beading around the keys, the carefully lathed front legs, the rippled mahogany or hardwood from which it is made, and the name of its maker and his address in Palma. It is not much to go on.

And by 1913 it was an instrument from another lifetime. 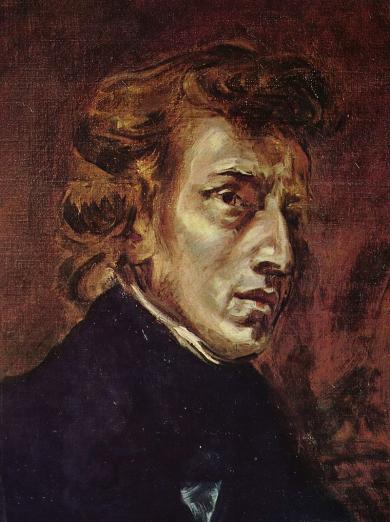 Chopin and Sand had travelled to Majorca in 1838 to escape the cold winds of Paris, and the illnesses that clung so persistently. While there, the composer slowly picked up the thread of the works for piano he had been composing in fits and starts for two or three years, his Preludes, which Pleyel, the work’s dedicatee, would publish a year later as opus twenty-eight, thereby launching the century’s most brilliant, enigmatic collection of piano miniatures.

But to finish them, Chopin needed a piano. Before leaving Paris he had arranged for a piano to be sent by Pleyel, but it was slow to leave the capital, slow to arrive in Marseilles, and would eventually sit for too long in customs in Palma.

The local piano he used in its place, and which the couple took with them that December to a former monastery in Valldemossa in the hills above Palma, was made by Juan Bauza of Mission Street, in the centre of Palma.

In her autobiography, Story of my Life (1855), Sand captures Chopin’s miraculous spontaneity during this period, whether at the piano or on walks where he hummed to himself, returning home quickly to try out his ideas on the piano, the piece sounding sublime, complete. But then came the hard work, the days of nervous strain and desperation as he wrote it down, reworking the same phrase over and over, pacing the room like a madman. 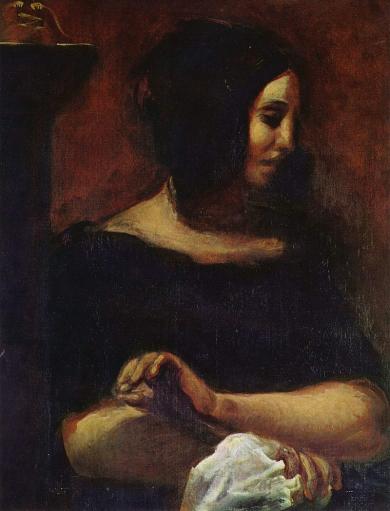 Famously Sand related how this process played out in “Raindrop”, Prelude No. 15.

She had travelled with her son Maurice to Palma in January 1839 in order to convince customs officials to release the newly-arrived Pleyel piano for a reduced import tax. They arrived back at the monastery, soaked and despondent, only to hear Chopin at the Bauza piano playing a new piece, reacting with a start as they came into the cell.

He explained that when he sat at the piano he had pictured himself dead, floating in a lake, fat drops of water plopping rhythmically on his chest.

Though Sand was referring specifically to the fifteenth Prelude, it is not at all clear the exact works Chopin composed or completed in Majorca; any list includes some of the Preludes (as many as nine), the Ballade in F, Op. 38, early sketches for the Scherzo in C sharp minor, Op. 39, two Polonaises, Op. 40, and the Mazurka, Op. 41, No. 1.

For all Chopin’s discomfort and poor health, all the limitations of Juan Bauza’s instrument, Majorca was for them both a period of astonishing productivity.

As Nazi Germany occupied Warsaw, Prague, and finally, in June 1940, Paris, it initiated one of the most systematic looting operations in the history of art – a restoration of great works and artists to the Fatherland, with specialist groups mandated to “claim cultural items from music history”, the Polish Chopin included.

In September 1940 a small contingent of Gestapo officers demanded entry to Landowska’s villa in Saint-Leu-la-Forêt on the outskirts of Paris with a view to dismantling the collection she had spent the previous 40 years accruing. 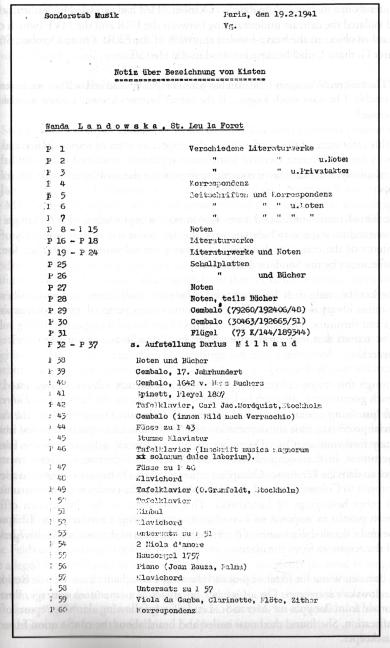 The inventory is gruesomely detailed: 60 crates containing correspondence, scores, books, manuscripts, gramophone records, Pleyel harpsichords with long serial numbers, a spinet of 1807 by the same maker, an unbranded harpsichord, its lid containing a fine image after Veracchio, a table piano by Carl Jac. Mordquist of Stockholm, two viola d’amore and a viola da gamba, a flute and a zither, and much more besides. In the 56th crate is a piano made by Juan Bauza, Palma.

The nominally Jewish Landowska had escaped Paris only days before German troops marched into the capital, fleeing to Banyuls-sur-Mer on the coast near the border with Spain.

A letter to the German command from the Délégation in her new precinct, on her behalf, underlining the importance of Chopin’s piano, among other instruments, to the “French artistic patrimony”, was unsuccessful. As the abandoned property of a Jew, it could not be considered French art property.

In late 1941, Landowska fled to New York. Meanwhile the 60 crates of instruments and manuscripts were transported to Berlin, first to storage facilities of a local transport firm, then, from August 1941, to the headquarters of Sonderstab Musik in Oranienburger Straße. 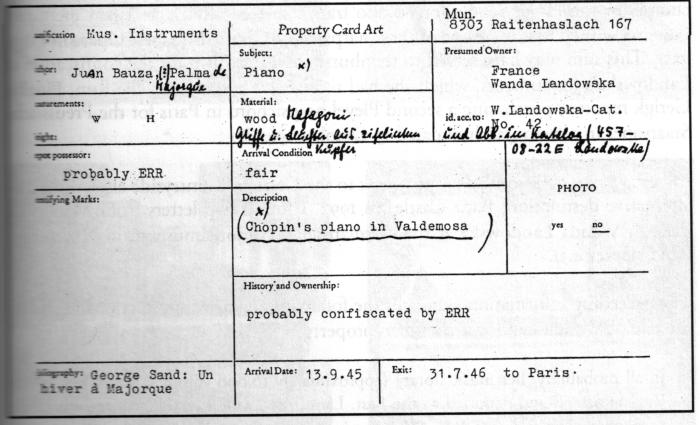 The official restitution card associated with the Chopin piano, dated 1945, has a few nice touches, as though it was completed by a museum curator with all the time in the world. The instrument is identified correctly as property of Wanda Landowska, its maker named as Juan Bauza, Palma de Majorque. Its significance is established in the column labelled “Description”: “Chopin’s piano in Valdemosa.”

At the end of July 1946 the piano, in “Good condition”, was packed and returned to the house in Saint-Leu-la-Forêt, along with nine other keyboard instruments in varying states of disrepair. Landowksa never saw them or her house again. But she spent her final years in America undertaking one of the great artistic projects of the 20th century, her recording of Bach’s Well-Tempered Clavier, the only score Chopin had with him in Majorca when he completed his own set of keyboard Preludes, in tribute to his revered Bach.