The superrich have stashed millions of works in tax-free storage. So what does that mean for the art? 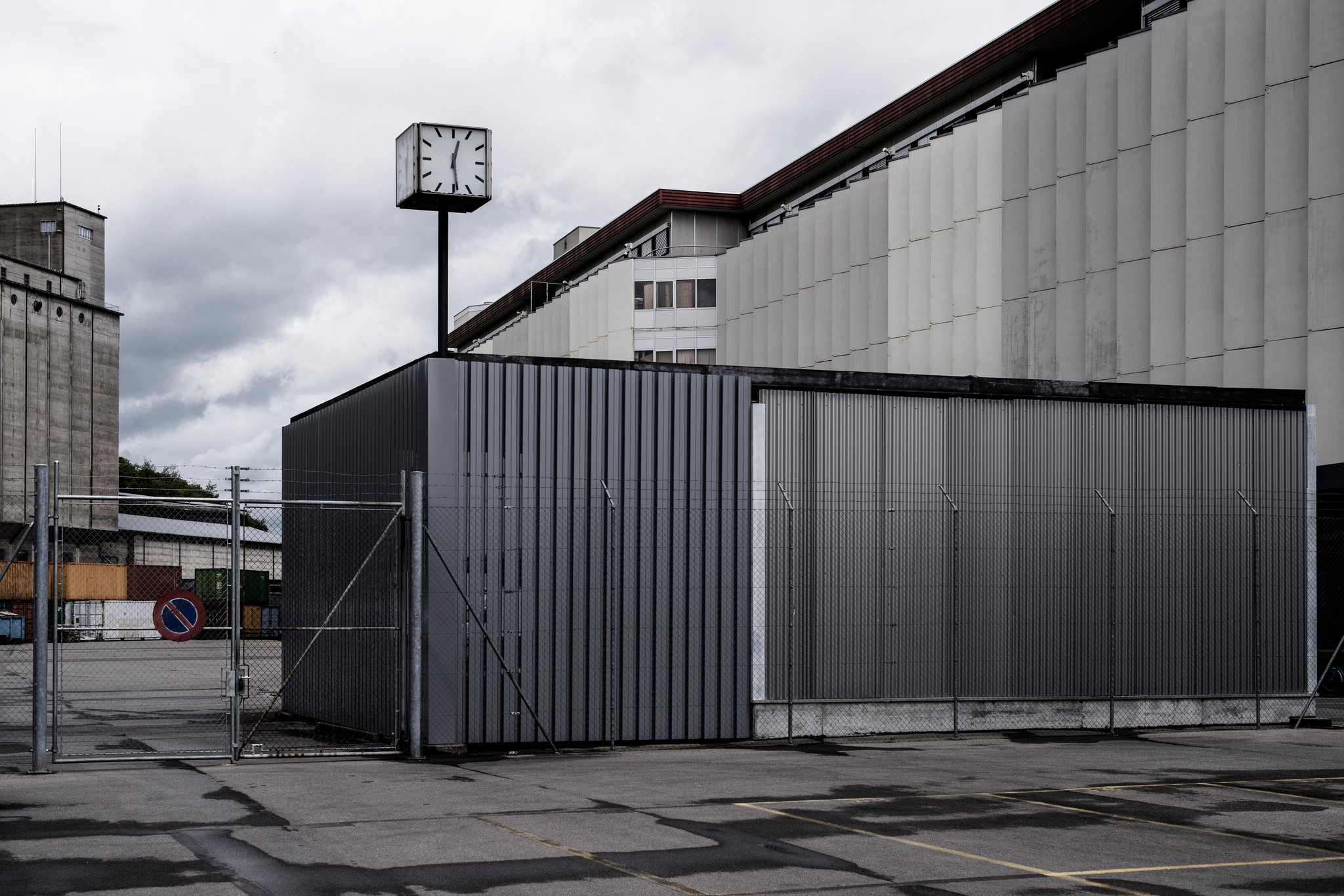 The Geneva Free Port, behind barbed wire, is crammed with storage vaults that contain some of the most exquisite artworks ever made, tucked away where they may not be seen for decades.

The drab free port zone near the Geneva city center, a compound of blocky gray and vanilla warehouses surrounded by train tracks, roads and a barbed-wire fence, looks like the kind of place where beauty goes to die. But within its walls, crated or sealed cheek by jowl in cramped storage vaults, are more than a million of some of the most exquisite artworks ever made.

Treasures from the glory days of ancient Rome. Museum-quality paintings by old masters. An estimated 1,000 works by Picasso.

As the price of art has skyrocketed, perhaps nothing illustrates the art-as-bullion approach to contemporary collecting habits more than the proliferation of warehouses like this one, where masterpieces are increasingly being tucked away by owners more interested in seeing them appreciate than hanging on walls.

With their controlled climates, confidential record keeping and enormous potential for tax savings, free ports have become the parking lot of choice for high-net-worth buyers looking to round out investment portfolios with art.

“For some collectors, art is being treated as a capital asset in their portfolio,” said Evan Beard, who advises clients on art and finance at U.S. Trust. “They are becoming more financially savvy, and free ports have become a pillar of all of this.” 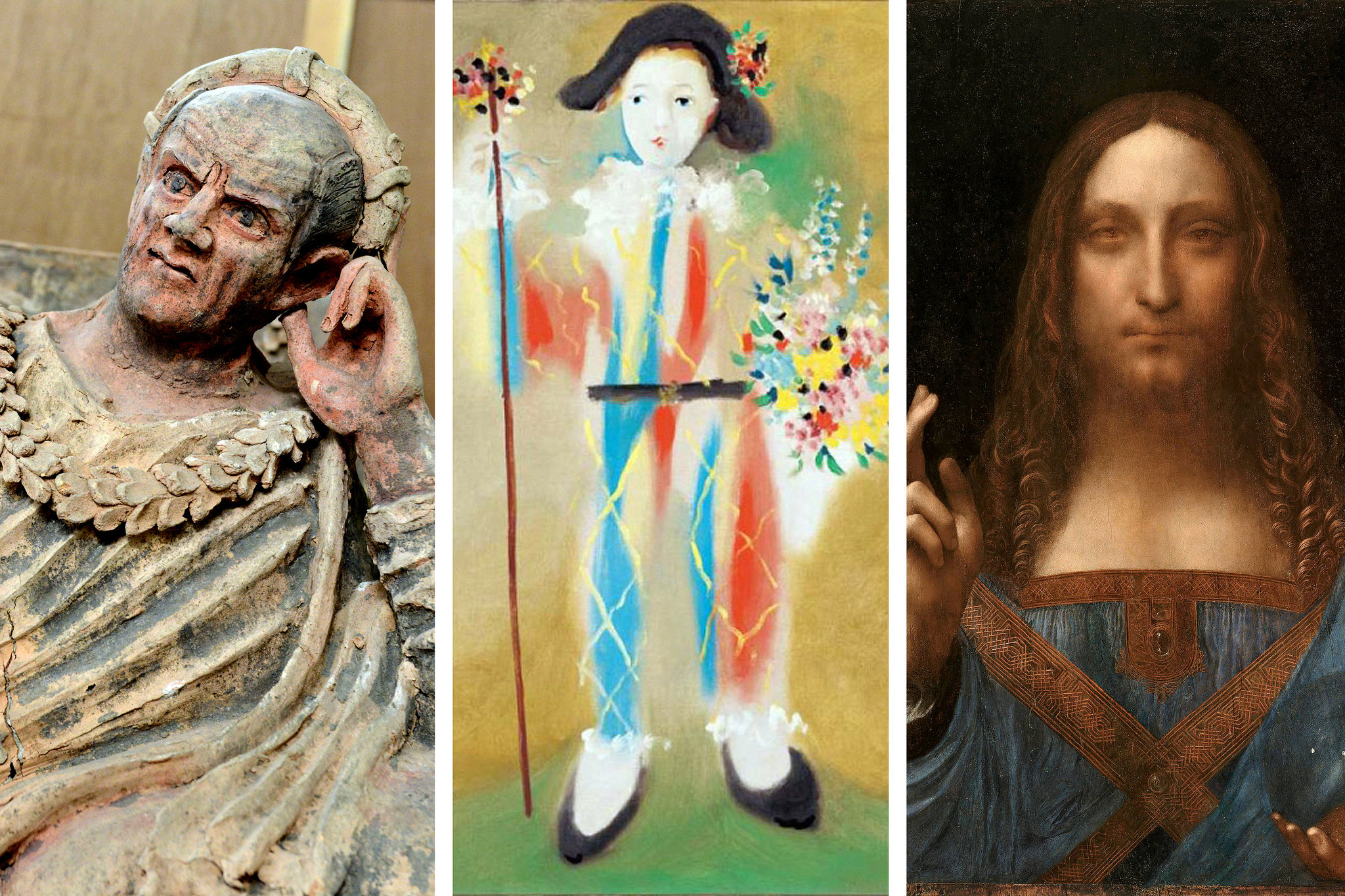 From left, a Etruscan sarcophagus that was locked in a free port for decades under a shell company’s name and returned to Italy earlier this year along with other antiquities stolen from burial sites; Picasso’s “Petit Pierrot aux Fleurs,” a portrait of his son Paolo in a harlequin costume, one of about 4,500 works the Nahmad family of London art dealers is said to have tucked away in the Geneva Free Port; and Leonardo da Vinci’s oil-on-panel “Christ as Salvator Mundi,” which emerged publicly for the first time in 2004 and was consigned to a free port when it was purchased in 2013. Credit 2016 Estate of Pablo Picasso/Artists Rights Society (ARS), New York

The trend is prompting concerns about the use of these storage spaces for illegal activities. It is also causing worries within the art world about the effect such wholesale storage has on art itself. “Treating art as a commodity and just hiding it in storage is something that to me is not really moral,” said Eli Broad, a major contemporary art collector who last year opened his own Los Angeles museum.

Free ports originated in the 19th century for the temporary storage of goods like grain, tea and industrial goods. In the last few decades, however, a handful of them — including Geneva’s — have increasingly come to operate as storage lockers for the superrich. Located in tax-friendly countries and cities, free ports offer savings and security that collectors and dealers find almost irresistible. (Someone who buys a $50 million painting at auction in New York, for example, is staring at a $4.4 million sales tax bill. Ship it to a free port, and the bill disappears, at least until you decide to bring it back to New York.)

At least four major free ports in Switzerland specialize in storing art and other luxury goods like wine and jewelry, and there are four more — most newly minted — around the world: Singapore (2010); Monaco (2012); Luxembourg (2014); and Newark, Del., (2015).

Concerned by the rapid growth of these private storage spaces and worried that they could become havens for contraband and money laundering, Swiss officials initiated an audit in 2012, the results of which were published two years ago. The results revealed a huge increase in the value of goods stored in some warehouses since 2007, led by an increase in high-value goods like art. Though the audit did not specifically measure the increase in stored artworks, it estimated that there were more than 1.2 million pieces of art in the Geneva Free Port alone, some of which had not left the buildings in decades.

Many masterpieces have long lived outside of public view, buried in the basements of museums or tucked away in the private villas of the rich.

But the free ports are drawing more criticism and concern, namely: Are they bad for art? Does the boxing up of millions of valuable works pervert the very essence of what art is supposed to do? 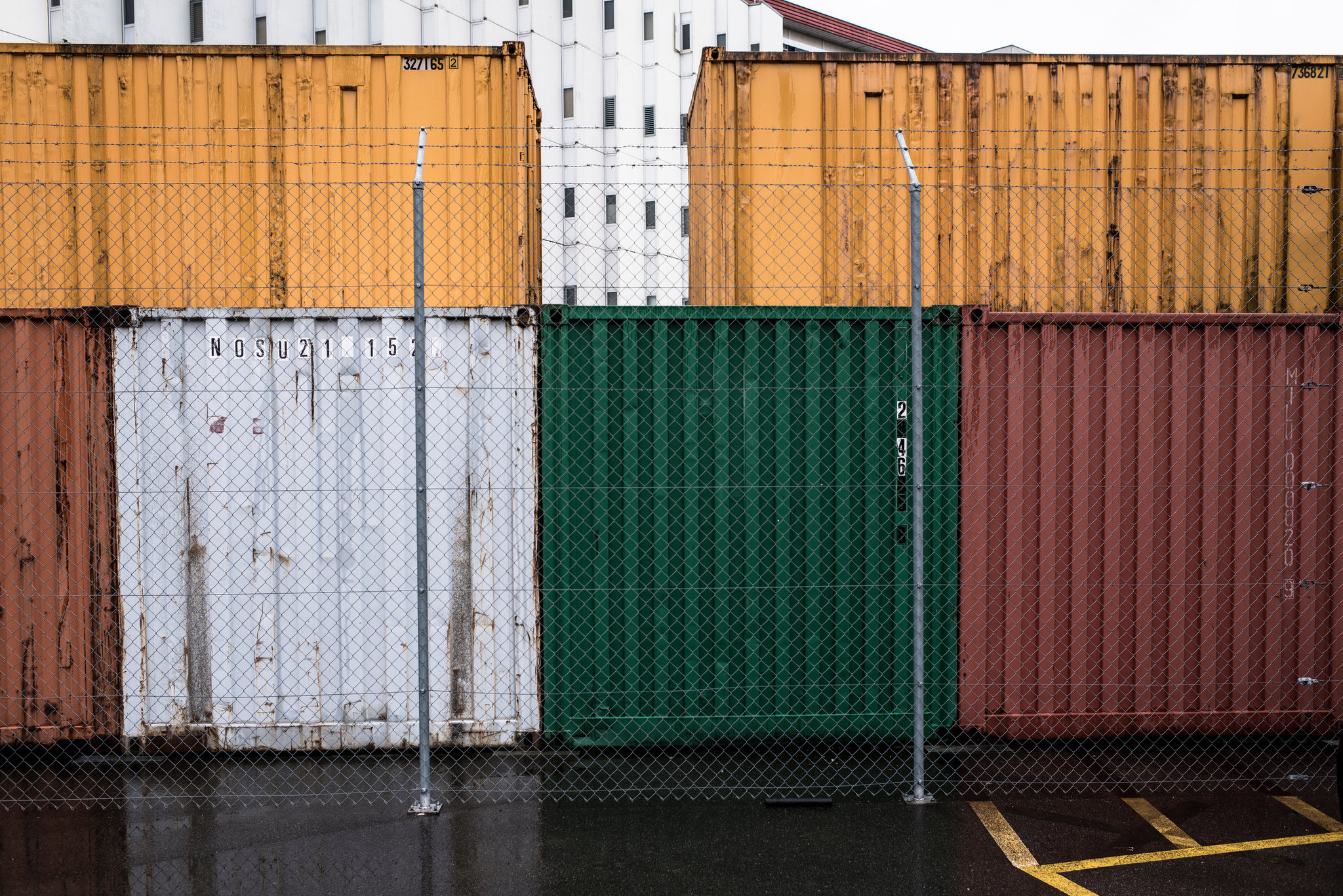 Containers stacked at the Geneva Free Port zone, one of several that have become popular destinations for locking up art treasures out of reach of taxes

Yes, say many in the art world. “Works of art are created to be viewed,” said the director of the Louvre, Jean-Luc Martinez, who described free ports as the greatest museums no one can see.

Some see even higher stakes for contemporary works, as they can be whisked off, their paint hardly dry, before ever entering the public’s consciousness. Storage puts the art “intellectually almost in a coma,” said Joanne Heyler, the director of the Broad Museum.

Not everyone agrees, pointing out that there is plenty of art in the world for people to see and that much art was created as private property. “Paintings are not a public good,” said David Nash, a New York gallery owner.

Even so, some collectors whose businesses have come to depend on free port storage are a bit sheepish. “It is a shame,” Helly Nahmad, a London dealer whose family is said to store 4,500 works in the Geneva Free Port, told The Art Newspaper in 2011. “It is like a composer making a piece of music, and no one listens to it.”

So just what works are locked away? Because most art is tucked into storage spaces quietly, it is difficult to know what is where at any given moment.

There are the rare Etruscan sarcophagi discovered in Geneva by the Italian police two years ago, found among 45 crates of looted antiquities, some still wrapped in Italian newspapers from the 1970s. 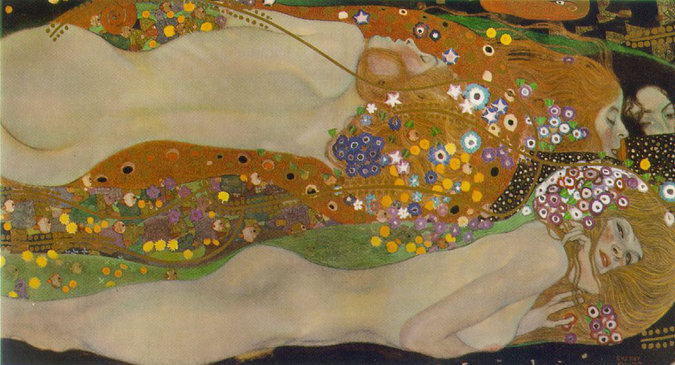 Gustave Klimt’s “Water Serpents II,” looted in World War II and later recovered by heirs, sold for $183.8 million in 2012 to a Russian billionaire who put it in storage.

(Mr. Rybolovlev is suing his former art adviser, a major free port operator in Geneva, and has since shifted his collection from Geneva to storage in Cyprus, according to court papers filed last year.)

Some 19 works by Pierre Bonnard, a master of Post-Impressionism, are owned by the Wildenstein family, one of the great art-dealing families of the 20th century, according to the former lawyer for the widow of the patriarch, Daniel Wildenstein.

And there is a portrait of Picasso’s second wife, Jacqueline, by the artist, along with 78 of his other works, shipped by his stepdaughter, Catherine Hutin, to the Geneva Free Port in 2012, according to legal papers.

“If Jacqueline was alive and knew that her paintings were in the free ports, she would just be devastated,” said Pepita Dupont, author of a book about Jacqueline Picasso. 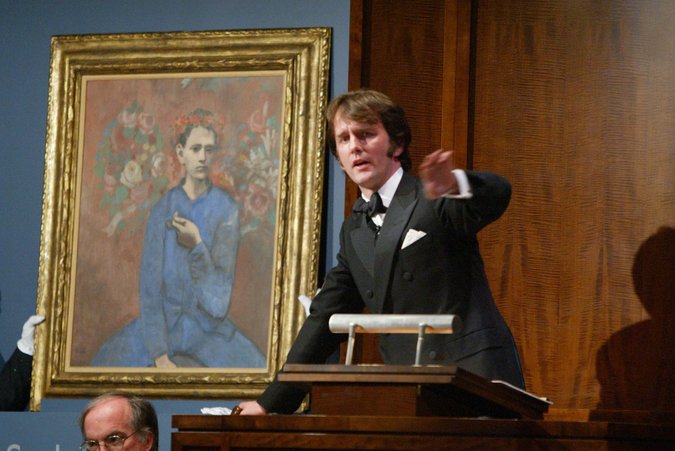 Picasso’s “Garçon à La Pipe” (“Boy With a Pipe”) disappeared after it was sold to an unknown buyer at a Sotheby’s auction in 2004 for $104 million. Dealers suspect a free port is its likely new home.

Despite enhanced Swiss efforts to track inventory and ownership, the free ports there remain an opaque preserve (though more transparent these days than counterparts in places like Singapore), filled with objects whose ownership can be confoundingly convoluted.

Case in point: $28 million worth of works by Andy Warhol, Jeff Koons, Joan Miró and others now stored in the Geneva Free Port. Equalia, a company registered by Mossack Fonseca (the law firm at the center of the Panama Papers controversy about how the wealthy conceal their riches), stored the works on behalf of a diamond broker, Erez Daleyot, in 2009. Once in storage, the art was used as collateral for debts Mr. Daleyot owed to a Belgian bank, according to court papers. Now a man named Leon Templesman, president of a New York diamond manufacturing company, Lazare Kaplan International, is trying to seize the art as part of a dispute with Mr. Daleyot and the bank.

Mr. Templesman said the free port’s embrace of confidentiality made such seizures more complicated. The bank, KBC, said it had kept the art in the free port “out of precaution” and that it could not comment further on a matter involving one of its clients.

David Hiler, president of the Geneva Free Port, said that as a result of the audit, the Swiss were working to address concerns about lack of transparency. Come September, he said, all storage contracts will require that clients allow additional inspections of any archaeological artifacts they want stored there.

Collectors and dealers choose to store art in the free ports for more pedestrian reasons than tax avoidance. Some simply have no more room in their homes, said Georgina Hepburne Scott, who advises collectors. And in a free port, their property is protected in climate-controlled environments, often under video surveillance and behind fire-resistant walls.

“When it is brought to light, the work is preserved; it’s not been hanging above a smoky fireplace,” she said. 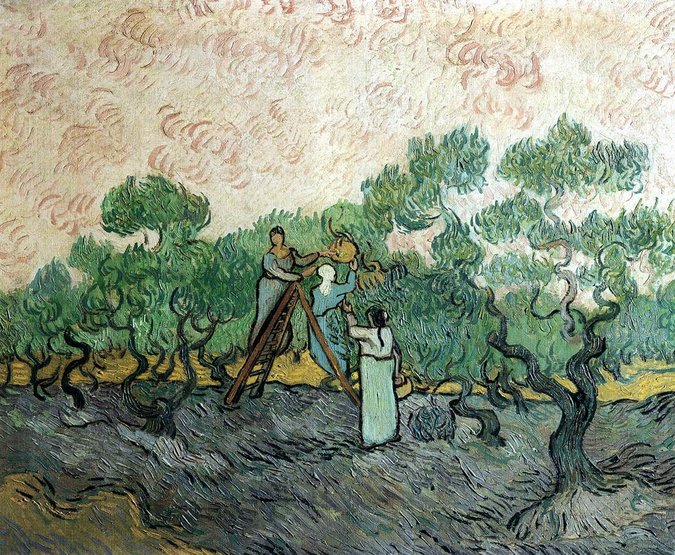 Van Gogh’s “The Olive Pickers” was once owned by the Metropolitan Museum of Art. Lawyers for a Greek shipping heiress are trying to trace it and a trove of other paintings, which they say was last seen in a warehouse in Lausanne, Switzerland.

Some warehouses also have viewing rooms where collectors can review their art and show it to potential buyers. This year, after voters in Geneva rejected a plan to expand the major art museum, a Swiss lawyer, Christophe Germann, wrote a newspaper column advocating wholesale sharing, arguing that free ports be forced to open their doors to let people see public displays of the private collections, a worthy trade-off for the tax benefits collectors receive.

For many living artists, meanwhile, the fact that their work might be stored away in a climate-controlled bunker has become part of the reality of doing business.

“Ideally, I would like my work to be on display rather than in storage,” said Julia Wachtel, a contemporary artist who knows that some of her collectors occasionally store art.

At their worst, Ms. Wachtel said, free ports represent a financial system in which investors have no connection to the art they buy. But she also recognizes that storage warehouses allow responsible collectors to manage their works and their limited wall space.

“People buying art is what keeps artists alive,” she said.

And at the end of the day, dealers say that most artworks eventually surface.

“Even if it stays there for the lifetime of the collector,” said a New York dealer, Ezra Chowaiki, “it’s not going to be there forever. It will come out.”