Ezzy Nahmad: “If the Gentleman Can Prove Rightful Ownership, I Will Gladly Give Him the Painting”

April
The Jewish Voice 4 May 2016
By Fern Sidman

In the continuing saga of ascertaining provenance of Nazi looted artwork, the Jewish Voice had previously reported on the burgeoning dispute over a precious 1918 Amedeo Modigliani painting. "Seated Man With a Cane."

The painting is valued at more than $25 million and is currently in the possession of London based art dealers who have garnered enormous prestige and influence. As was reported by the Toronto Star, the Nahmad family first rose to prominence as a banking dynasty of Sephardic Jews from Syria before emerging as high-profile players in the art world. In addition to London, they own galleries in New York and are a ubiquitous presence at art auctions “where Picassos and Modiglianis are traded like baseball cards.” 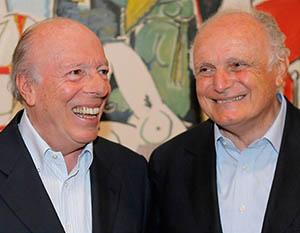 Fine art dealers and billionaires Ezra Nahmad, (left) and his brother David (right) pose in front of “Les Femmes d'Alger,“ one of the 116 masterpieces of David's Picasso collection, in Monaco on July 12, 2013.

In a succession of legal complaints aimed at the Nahmad family by the estate of a Paris art dealer who claims that the painting rightfully belongs to them; the grandson of Oscar Stettiner continues to seek redress. In 2015, a New York State Supreme Court judge ruled that Phillippe Maestracci, lacked standing to go forward with the case in the United States.

According to documentation submitted to the court, Maestracci maintained that Stettiner (who was his grandfather and a Jewish art dealer of British nationality) had made several attempts to reclaim the lost piece of classic art subsequent to the end of World War II.

In 1939, Stettiner fled Paris sans his art and antiques. The collection was taken over by a temporary Nazi appointed administrator who was tasked with overseeing the gallery in 1941.

According to a New York Times report, in 1944, the painting was sold at auction by the Hotel Drouot, and it was then resold in a series of transactions. In 1946 Stettiner filed a civil claim for a portrait of himself as a child, a pile carpet and “a Modigliani portrait of a man." Stettiner died in France in 1948. 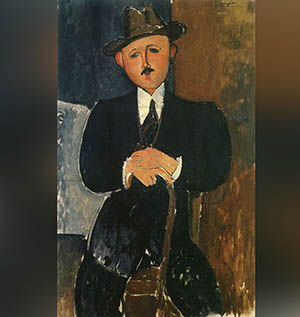 The precious 1918 Amedeo Modigliani painting. “Seated Man With a Cane“ is valued at more than $25 million and is currently in the possession of the Nahmad family; London based art dealers who have garnered enormous prestige and influence in the international art market.

In the ensuing years, Maestracci, 72, and the administrator of his grandfather's estate have encountered a number of roadblocks in their quest to recover the painting. They have yet to determine the origins of the International Art Center; the corporation that now owns the painting.

In 2011, the legal battle in federal court between Maestracci and the Nahmad Gallery commenced. Later, Maestracci withdrew the suit but refiled in the ensuing years.

In 2015, attorneys representing the estate administrator and Maestracci put forth a premise that the International Art Center is but a shell company for the London and New York art galleries belonging to the Nahmad family.

For its part, the Nahmad Gallery told the New York Times in 2015 that "it has no control of or ownership stake in the International Art Center, which bought the painting at auction in 1996."

Aaron Richard Golub, a lawyer for the Nahmad family told the paper that the International Art Center "bought the painting in good conscience from a reputable auction house." He added that the Maestracci complaint as a case that has “no substance whatsoever” and intimated that he was not convinced that Stettiner ever owned it.

In an exclusive to the Jewish Voice, Izzy Nahmad, the brother of David sat down with publisher, David Ben Hooren to discuss the matter.

Enjoying the exquisite tropical Miami weather at an open air restaurant at the Setai Hotel in South Beach during last week's Passover holiday, Mr. Nahmad said of Maestracci and his claims of ownership, "If this gentleman can provide concrete proof that this piece of art truly belongs to him, then I will gladly give it to him. As of now, however, he has attempted to pursue this matter five times through the judicial system and each time he has failed to make a case that has legs."

According to the report in the New York Times, the painting in question is currently housed in a freeport in Geneva, Switzerland. Such venues are essentially tax free depots where many collectors store their paintings for an unlimited amount of time.

The painting last surfaced in New York in 2008 during an unsuccessful bid to sell it to the Sotheby's auction house.

Providing restitution in cases of Nazi looted artwork has devolved into a serious imbroglio for both dealers and proclaimed owners over the years.

In 2012, during a small scale German tax inspection at the Munich apartment of Cornelius Gurlitt, 1500 pieces of Nazi looted artwork was discovered. Gurlitt, who has since passed away, claimed that he inherited the collection from his father, Hildebrand.

The ire of Jewish groups was aroused several months ago when it was reported that a task force that was set up by the German government to determine the ownership history of the paintings had found that only five of the paintings had been actually looted. The task force said that 499 pieces of art had a "questionable history." Ronald S. Lauder, the leader of the World Jewish Congress described the results of the task force's investigation as 'meager and not satisfactory.'

The London 'Daily Mail' reported that of the five that were categorized as looted by the Nazis, "four were returned to heirs of their owners, including Max Liebermann's Two Riders on a Beach and Henri Matisse's Seated Woman."

The three additional works proved to be looted were by German artists Carl Spitzweg and Adolph Menzel, and Impressionist master Camille Pissarro.