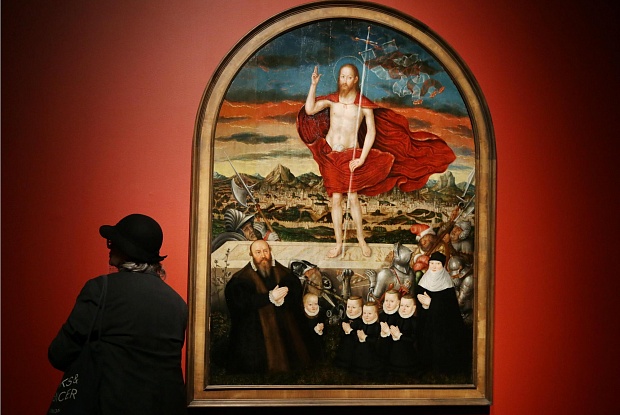 An exhibition that reunites for the first time several Soviet-seized works by the 16th-century German court painter Lucas Cranach with those from the Friedenstein Castle in Gotha, Germany—from where they were confiscated following the Second World War—runs at Moscow’s State Pushkin Museum of Fine Arts through 15 May.

The exhibition brings together 48 paintings and more than 50 graphic works by Lucas Cranach the Elder and his son from Gotha’s Friedenstein Castle and the Pushkin, as well as other European and Russian museums and Russian private collections. It is the first-ever major Cranach exhibition in Russia and is a milestone in overcoming Russian-German tensions over Second World War “trophy art”—the German collections that the Red Army appropriated as compensation for the Nazi seizure and destruction of Russian cultural treasures.

Although the exhibition includes Cranach works that have been in Russian collections since before the Bolshevik Revolution, the show also features paintings and drawings by the Cranachs that were returned by the Soviet Union to Gotha in the 1950s after being seized as “trophy art”. But other works on show were taken from Gotha and Dresden and have not been returned.

The official Tass news agency noted that two works by Cranach the Elder depicting the fall of Adam and Eve—one brought from Gotha for the Pushkin show, and one originally from Gotha and now in the Pushkin’s collection—“are symbolically positioned side by side” in the exhibition.

The Pushkin has staged several headline-grabbing exhibitions recently, including a show featuring Edouard Manet’s Olympia, which has left the Musée d’Orsay for only the second time (until 17 July).

“I hope [the exhibitions] will help all of us,” Marina Loshak, the director of the Pushkin, told The Art Newspaper. Bringing together the divided Cranach collections is a “moral experience”.

Irina Antonova, who ran the Pushkin for over half a century until 2013 and is now its president, was a young employee of the museum when “trophy art” was brought in after the war and then hidden away as a state secret for decades. She told The Art Newspaper that she remembers seeing the Cranachs when they first arrived and says her German colleagues are pleased with the current exhibition. “They welcomed the reunification of the collection,” she says. Both Loshak and Antonova say the Cranach show fills an important gap in Russian understanding of German art.

At the exhibition’s opening in March, Martin Eberle, the director of the Friedenstein Castle Foundation said, according to Tass: “For the first time in 70 years, works from the Friedenstein Castle are being shown together. In the sphere of politics there might be a different opinion regarding the division of the collection, but with regards to the cultural sphere, we are pleased with such cooperation.”

The Pushkin will be sending an exhibition of French art to Gotha in 2017.

• The Cranachs: Between the Renaissance and Mannerism, Pushkin State Museum of Fine Arts, Moscow, until 15 May