The Modigliani masterpiece “Seated Man With A Cane,” has been the center of a controversy that spans decades. The painting that has been appraised for $35 million has been part of an endless battle to be returned to its rightful owner.

Now, there’s a chance that fight for the painting might end after the massive findings of 11.5 million documents known as the Panama Papers. Information found in the documents about the painting might solve a mystery. The papers reveal that a dominant family of international art dealers has possibly used a Panamanian-registered company to hide information about its ownership.

The Modigliani painting is at the center of a court battle.

The documents were exposed through a joint investigation by the International Consortium of Investigative Journalists (ICIJ), the Toronto Star and the fifth estate.

These recent findings have made an immediate impact. Geneva authorities quickly responded to the Panama Papers revelations about the Modigliani piece. They issued a search warrant at a warehouse in Geneva where the painting was housed.

The family of Jewish art dealer Oscar Stettiner is certain that the painting belonged to him. Stettiner lived in Paris before World War II and was looted by the Nazis when they struck Paris.

It wasn't until 1996 when it that the painting appeared in an auction at Christie’s in London and was sold to the International Art Center Corporation.

Following it being hidden for years upon years, the painting became an attraction to be seen in art galleries in London and New York that are owned by hierarchies of international art dealers, the Nahmad family.

According to Forbes Magazine the Nahmad family’s collection of art is estimated at about $4 billion.

Oscar Stettiner's grandson Philippe Maestracci is suing the Nahmads for the return of the Modigliani painting in the New York Supreme Court. 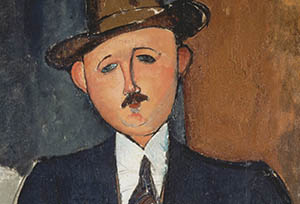 The Panama Papers contain secret documents that may help solve part of the mystery of the Modigliani masterpiece called “Seated Man With A Cane”.

According to court documents, the Nahmads stated that while they have had “Seated Man With A Cane” shown at their galleries, they are not the owners of it. Rather, they have claimed that it is owned by a company registered in Panama called International Art Center (IAC).

"Not anyone else in the world including defendants Helly Nahmad Gallery, Helly Nahmad and David Nahmad owns the painting. The painting is owned by a corporation,” said the Nahmad’s lawyer, Richard Golub. 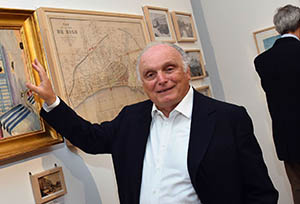 Golub claims that David Nahmad has been “sued for a reason I can't figure out.”

Yet, the documents discovered in the Panama Papers state that the International Art Center, located in Panama was established by the Nahmads. In fact, in 2014 David Nahmad stated in a letter that he is the “sole shareholder.” The documents also include shareholder certificates and records of registration.

These documents that have been a major source of revelation into offshore dealings have been carefully configured and accurate yet Nahmad’s lawyer is still set on rejecting their accuracy.

Investigator James Palmer who has worked diligently on behalf the Stettiner family, is in opposition to Golub’s remarks.

"This is about getting justice and getting closure and that's what this is about. It's really simple. The painting was stolen and it needs to be returned to its owner," Palmer said.

Palmer is the founder of Mondex Corporation, a company that works to ensure beneficiaries are returned looted artwork and granted unclaimed assets. He has committed himself to finding art that was looted by the Nazis and returning it to whom it belongs.

Having the information found in the Panama Papers will help Palmer support the Stettiner’s in court. The papers confirm what he assumed about art guru David Nahmad. The painting was never his.

The Nahmad family is also disputing the claim by Stettiner's grandson that the family ever owned the painting.

While it appears challenging to know if the Seated Man painting truly belongs to the Stettiners, as it’s almost a century since it has been stolen, Palmer said “You've got a photograph of the painting, the same painting that we're pursuing and you've got a reference to Oscar Stettiner's ownership of that painting.”

The painting was displayed at a famed art exhibition Venice Biennale in 1930. In the files from that exhibit, Palmer found a photograph of the painting and a catalogue that said it was from the Stettiner collection. To add to that there was a letter copied to the Biennale where Stettiner is labled as the owner of the painting.

When the Nazis occupied Paris in the 1940s, Jews were targeted, arrested and deported. They were stripped of their possessions.

Those records show a Modigliani that was taken and sold. The name of the painting was not listed.

Following the war, Stettiner filed a claim for his stolen things including a Modigliani painting that he had described as a "portrait of a man."

In 1946, a Paris court ruled in favor of Stettiner's claim however, The Modigliani was sold to an unknown American soldier.

Sadlly, in 1948, Oscar Stettiner died in the south of France, before he could see his painting again.

David Nahmad, said he would never accept art that was looted by the Nazis.

"I will not sleep at night if I know that I own a despoiled object. It brings bad luck. It's an enormous crime. There's one thing that I believe with all my heart: you must not make money with the suffering of war victims."

Unfortunately, how does one come up with a sales receipt after being ransacked during the height of ultimate cruelty by the Nazis? Who holds on to receipts during such times! How could they?

In the meantime the Nahmads have stored away the painting along with thousands of others in a warehouse in Switzerland.

It seems this will be an ongoing case where Philippe Maestracci the sole living heir of Stettiner said that his only reason her perseveres to get the painting back is because "I do this for the memory of my grandfather."

What will be the future of the Modigliani masterpiece “Seated Man With A Cane,” is yet to be seen but many are hoping it finds its way to the home of Settiner’s grandson.