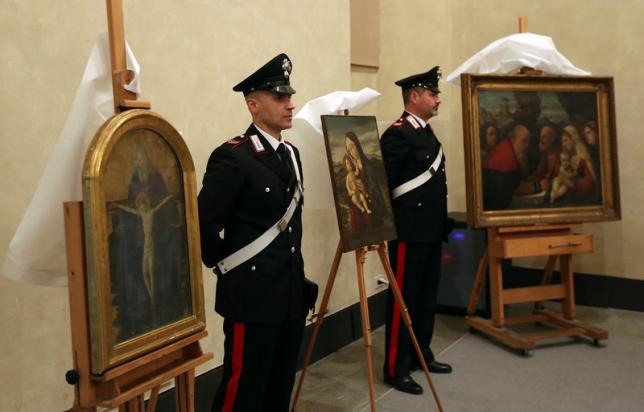 Three late 15th century paintings missing since they were looted by Nazi troops from a Tuscan villa over 70 years ago have been recovered and two people have been accused of receiving stolen goods, police announced on Monday.

The works, of religious themes, seized in two private homes in Milan last July, were described by art historian Paola Strada as "of immense interest because of their unique character, and because they are from artists considered rare on the market".

Part of a vast collection of art of the House of Bourbon- Parma, the paintings were plundered in 1944 by German troops from a villa in the Tuscan town of Camaiore, where Prince Felix, consort of the Grand Duchess of Luxembourg, once lived.

Most of the stolen pieces, kept in the villa of a high-ranking member of the Nazi SS military organisation, were found and returned to Luxembourg soon after the end of the war.

The paintings recovered in Milan, and held in the city's Pinacoteca di Brera art museum since July, were three of almost 40 pieces still missing.

A criminal investigation linked to the recovery of the paintings has been initiated, the head of of the Art Crimes department Riccardo Targetti said, with two unnamed people accused of receiving stolen goods.

Experts from Italy's culture ministry said they were not able to give a value for the art pieces.

"For the time being, there are no parameters we can use to quantify how much they are worth," art historian Strada said.

The pieces include the "Trinity" by Alessio Baldovinetti, a scholar of Renaissance painter Beato Angelico, and the "Presentation of Jesus to the Temple", by Verona-based Girolamo Dai Libri, a famous miniaturist artist.

According to Antonella Ranaldi, superintendent for the arts at the culture ministry, the paintings require restoration as "their state of conservation is not great".

They need not be returned to Luxembourg as compensation had already been paid for the loss, police said.

Police based in the northern town of Monza began investigations to recuperate the three pieces of art in 2014, drawing on analysis of old documents.

The team recovered three other art pieces in 2009 and 2015, belonging to the Mason Perkins and the Loeser Calnan collections.

Agents acting on behalf of the Nazi party systematically stole art and cultural property from occupied territories. In those years many Jewish artists and collectors were also forced to sell their art and other pieces were confiscated.

While a majority of art work was recuperated by allied armies soon after the war, much is still missing, feeding into an illegal multi-billion dollar international trade, estimated to be the third largest after drugs and arms trafficking.