US Senate blocks the import of art and artefacts from Syria 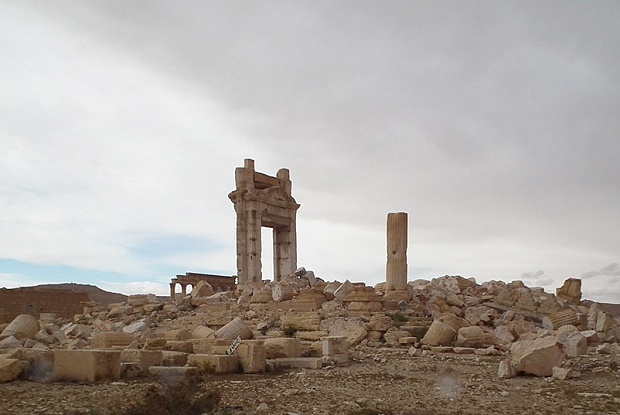 The Sella of Bel Temple after it was partially destroyed by Isil in an explosion. Photo: Syrian Directorate-General of Antiquities and Museums

The US Senate unanimously passed a bill intended to stem the perceived flow of illicitly removed artefacts from Syria on Wednesday, 13 April. The Protect and Preserve International Cultural Property Act had already passed Congress's lower chamber, the House of Representatives, and is headed to President Obama to be signed into law.

The law would effectively ban the import of “any archaeological or ethnological material of Syria”, granting the President and Congress other review powers over such imports, though it may have broader scope as well. A minor section also stipulates that “the President shall report annually to Congress on executive branch efforts to protect and preserve international cultural property”.

The decision comes, after months of debate, just as a report titled #CultureUnderThreat was published by a task force led by the Antiquities Coalition, the Asia Society and the Middle East Institute. The report urged the Obama administration to take stricter measures to stop the looting of archaeological sits by armed militants such as Islamic State. The “lack of action has kept the US market open to the import of Syrian antiquities—making it a potential source of funding for extremist organisations,” the report states.

Syrian imports on the rise?

The value of Syrian antiques imported to the US has risen five-fold during the country’s civil war, a study of US Customs’ data reveals. Research by the cultural heritage lawyer Rick St. Hilaire says that Syrian antiques were America’s number one import from that country in 2014, with an estimated value of $11m, up from $2.2m in 2009 before the war began.

Overall the value of Syrian imports has fallen from $285.9m in 2009 to $12.4m in 2014, due to US sanctions against the Assad regime. “How is it that a war zone is generating an industry of antiques, and works of monumental stone and mosaic cubes?” asks St. Hilaire. He attributes the increase in such imports to looting by the Islamic State, of which there is plentiful other evidence. He believes his figures may even under-represent the scope of looted cultural imports, since both the nature of the object and their estimated value are determined by the importer, and rarely verified by customs officials. But the same goes for their country of origin: the objects that are the subject of St. Hilaire’s study may have been removed from Syria centuries before the current conflict.

What the study is based on

All imports to the US are required to bear a number on their shipping information that corresponds to its place in the Harmonized Tariff Schedule (HTS). The HTS codes helps determine what tariffs or duties the object might be subject to. HTS 9706, crucial in this study, pertains to antiques over 100 years old, which are subject to no duties. HTS 9706 also pertains only to objects imported for “consumption,” in this case by collectors and dealers, not museum loans. Like most customs data, the shipper declares an item’s HTS, stated country of origin and stated value. The vast majority of objects coming into the country are not inspected by customs.

Looting from heritage sites in the warzone, and fears that Islamic extremists are profiting from the illicit trade in cultural property, are problems acknowledged by the Federal Bureau of Investigation, among others. The FBI issued a statement last August that it had received “credible reports that US persons have been offered cultural property that appears to have been removed from Syria and Iraq recently.” The State Department has offered up to $5m, through its Rewards for Justice programme, for information that leads to the disruption of sales of looted antiquities that benefit so-called Isil.

Antiquities dealers have been quick to pour cold water on reports that Syria’s looted heritage has reached the US. Randall Hixenbaugh, of Hixenbaugh Ancient Art, takes issue with the basis for the study being the country of origin field on a customs form. “When I’m buying something at auction in London or Paris that comes out of an aristocratic collection it’s forcing me… not to lie but to make a huge assumption as to where something was found, whereas I have no idea where it was found,” he says. “The field assumes geographical boundaries that may not have existed at the time an object was created”, he says. “Marking something as Syrian may mean that it is Roman, Assyrian, Hittite, Egyptian, Caanite, or Greek, and there’s no way of telling when it was removed from the country.”

Hixenbaugh says that fluxuations in import value for HTS 9706 might be attributed to just a handful of expensive items having been purchased legitimately, or otherwise brought into the country legally–not the rampant import of many smaller, less valuable items.

St. Hilaire says that importers are supposed to list multiple possible countries of origin if they’re unsure, but concedes that the lack of standardised weight or quantity on such import forms is a major flaw in the system, and something he’s pushed to change.