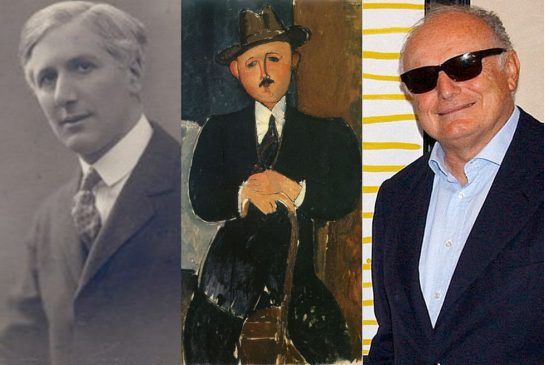 Modigliani's 'Seated Man with a Cane,' worth an estimated $35 million, is at the centre of a dispute between a French retiree and a billionnaire family.

Swiss authorities raided a Geneva free port Friday morning — a massive warehouse storing more than a million pieces of valuable art — a day after news agencies, including the Toronto Star, reported new details about the disputed ownership of a $35-million Modigliani stored there, Geneva-based Le Temps newspaper has reported.

The Modigliani painting Seated Man With a Cane, currently the subject of litigation in New York Supreme Court, was the target of the raid, the newspaper said. It was not clear if the Swiss authorities took possession of the artwork.

The painting’s owner is a little-known Panamanian company called International Art Centre (IAC), which stores the painting in the Geneva free port.

The controlling hands behind IAC are billionaire David Nahmad and his family, according to revelations published Friday by the International Consortium of Investigative Journalists and its partners.

That finding is based on never-before-seen secret records contained in a database of Panamanian law firm Mossack Fonseca, which registered IAC in 1995. While Nahmad and his brothers show up nowhere on the official list of company directors, the secret records show they have controlled the company since its inception.

Even though the real owner of the painting was a mystery until these revelations, the presence of the work of art in the free port has been known for a long time,” Le Temps reported. “The company, Rodolphe Haller, has already indicated to American authorities that it held the piece for the IAC.”

The rightful ownership of Seated Man With a Cane is being contested in a New York court by a French man named Phillip Maestracci, who alleges the painting was looted from his grandfather, Oscar Stettiner, by the Nazis during the Second World War.

The Nahmads purchased the painting at a Christie’s auction in London in 1996 under the IAC name.

In court records, the Nahmads claim that Maestracci named them as defendants improperly since the painting is owned by IAC.

“Not anyone else in the world . . . owns the painting,” says a response filed last year by the Nahmad family’s lawyers.

Toronto-based art research firm Mondex Corp. is representing the retired Maestracci in his bid to get ownership of the painting.

“(The leaked documents) corroborate what we’ve believed for quite some time — that the family is owning and controlling the International Art Center,” said Mondex president James Palmer. “And that has serious implications.”

After Friday’s raid, Palmer issued a press release calling it a “major victory for our client in his year’s long struggle to recover a valuable work of art he rightfully owns.

“It is also a statement to the Nahmads that their possession of this painting is and has always been illegal. I am hopeful that once David Nahmad sees the new evidence that we have found in this matter that he will be a man of his word and return the painting to the family of Oscar Stettiner. In the meantime we look forward to working with Swiss authorities to recover Seated Man With a Cane and returning it to its owner.”

David Nahmad and his lawyer, in interviews this past month, shifted their defence from questions of the family’s involvement in IAC to questions about the provenance of the painting and whether the Jewish art gallery owner Stettiner actually owned the painting.

“It’s not important to determine whether IAC belongs to me or not,” David Nahmad, who is identified as the sole shareholder of IAC on a 2014 company shareholder certificate, told investigation partner Le Monde last month in an interview in Paris.

What is important, he said, is evidence about the painting’s provenance and Maestracci’s claim to it: “Everything turns on this detail.”

The Nahmads insist that even if historical records suggest Stettiner owned a Modigliani painting that was looted by the Nazis and sold in an auction at his gallery in 1944, they don’t conclusively indicate that painting was Seated Man With a Cane.

While a photograph of a prestigious Venice art exhibition shows Seated Man with a Cane hanging on the wall and listed under Stettiner’s name, the Nahmads say it could have simply been part of his gallery collection or offered on consignment.

Palmer says the overwhelming weight of evidence suggests the painting called Seated Man With a Cane was owned by Stettiner — and the time has come for the Nahmads to return it to the Jewish family from whom it was taken.

“I think it’s a great opportunity for Mr. David Nahmad . . . to step up and do the right thing and return the painting. It’s been more than 70 years and Mr. Maestracci deserves that peace of mind, deserves that justice. These other findings that you found, which are pretty incredible, they have serious implications for the Nahmad family. Very serious.”

Geneva is home to the world’s largest freeport — a tax-free zone where valuable assets, including art works, can be stored, bought and sold by the wealthy, free from import taxes or duties.