The disputed ownership of a painting worth up to £17m ($25m) may have been clarified in the leaked documents from law firm Mossack Fonseca. 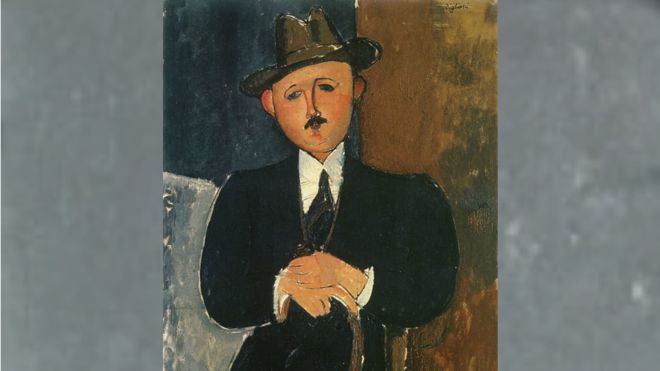 The work was painted by Italian artist Amadeo Modigliani in 1918

A Paris art dealer's estate wants the art-collecting Nahmad family to return Amadeo Modigliani's Seated Man With A Cane, which it claims the Nazis seized in World War Two.

The family claimed in court it was held by International Art Center (IAC).

The leaked papers have now shown the company is owned by the Nahmads.

The documents, obtained along with millions of others by the International Consortium of Investigative Journalists, show the Panama-based IAC has been controlled by the family for more than 20 years.

Richard Golub, the lawyer for the family's leader David Nahmad, said it was "irrelevant" who owned IAC, as "the main thing is what are the issues in the case, and can the plaintiff prove them?"

The family of Oscar Stettiner, a Jewish art dealer, claim he originally owned the painting before fleeing Paris in 1939.

According to legal papers, they claim the 1918 work changed hands multiple times before being bought by a US military officer for 25,000 francs in 1944.

In 1946, Stettiner filed a claim in France to reclaim the painting, but died two years later with a decision still pending.

Golub disputes these claims and has questioned if Stettiner ever owned the painting.

The leaked documents show that while defending a legal challenge to reclaim the painting by Stettiner's grandson, Philippe Maestracci, in February 2015, the Nahmads' lawyer Nehemiah Glanc emailed IAC's legal team to ask for clarity as to who was "authorised to sign on behalf of IAC".

He was put in touch with Mossack Fonseca's Geneva office, who said their nominee directors in Panama could sign as long as the service was paid for.

Had the Nahmads signed the documents as owners as IAC, they would have lost the legal protection the company provided.

Maestracci's case was dismissed in November 2015 on the grounds that papers should have been served in Panama, not New York as they were, and that Maestracci was not the proper plaintiff.

The case has now been refiled in New York's Supreme Court with a court-appointed administrator as the plaintiff and a claim that IAC was an alter ego for the Nahmad family "in a manner so as to confuse and conceal their identities, and hide revenues generated".