Famous Viennese museum returns 2 and keeps 3 paintings to descendant of owner, after she struggled two decades for justice. 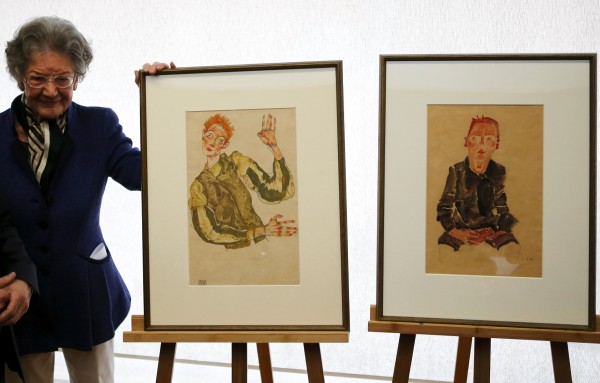 Elisabeth Leopold , the widow of Museum founder Rudolf Leopold, stands next to the two paintings, by Austrian artist Egon Schiele during a press conference in the Leopold Museum in Vienna, Austria, April 7, 2016.

The museum said it had agreed to return two of the watercolors - including a self-portrait of Schiele - to the New York-based heiress of Viennese art collector Karl Maylaender who was deported from Austria in 1941.

The remaining three drawings will stay in the possession of the museum, which is home to the world's largest permanent Schiele exhibition.

"It puts an end to years of conflict while allowing both parties to save face," Ostermayer told reporters in Vienna.

Since Austria passed a law in 1998 covering the restitution of vast numbers of artworks stolen by the Nazis, thousands have been returned - including major works worth millions of euros.

In 2010, the Leopold made worldwide headlines when it reached a $19-million settlement with a Jewish art dealer's estate in the United States over "Portrait of Wally," another Schiele masterpiece stolen by the Nazis.

The same year, an art commission set up by the culture ministry recommended the museum hand back Schiele's watercolors to Zirkl.

As a privately-funded institution, however, the museum was not obliged to follow the ruling.

"I am so happy that the heiress can still enjoy these works," said community representative Erika Jakubovits.

Austria's most famous restitution case in recent years concerned Maria Altmann, who after a lengthy legal battle secured the return of five Klimts in 2006. One of them, "Portrait of Adele Bloch Bauer I," sold for $135 million, a record at the time.

During the Third Reich, the Nazis carried out large-scale cultural looting across occupied Europe, with many stolen art works still unaccounted for today.

One of the most spectacular finds occurred four years ago when more than 1,200 artworks, including pieces by Cezanne, Delacroix and Munch, were discovered in the Munich home of Cornelius Gurlitt, the son of a powerful Nazi-era dealer.