$37 billion of treasure hidden around Germany 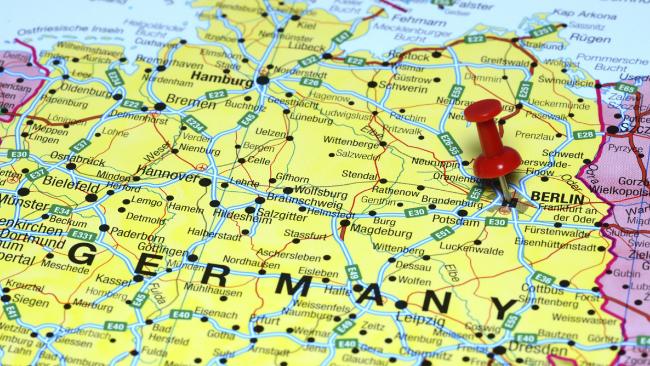 There’s a stash of treasure hidden across Germany.

AS Nazi Germany began to fall in 1945 its leaders set about hiding the treasures they looted for the previous six years.

Priceless art and silver, some of it stolen from the Jewish people they sent to the gas chambers, artefacts taken from museums and tonnes of gold — all stashed in mines or sunk in lakes as defeat in World War Two loomed, The Sun reported.

While some of these cultural treasures were saved by Allied units, around $37 billion of loot is still missing. And the hunt for it is still on.

Last year, locals in the Polish town of Walbrzych claimed to have found evidence of secret railway tunnels where, legend has it, Third Reich generals hid a train loaded with gold and jewellery.

Treasure hunters have also focused on various lakes where billions in Reichsbank gold was thought to have been dumped.

Here, we pick out what is still missing — and where it might be.

IN the hills surrounding the castle of Wewelsburg, northeast Germany, the hunt is on for an SS jewellery haul worth around $93m.

SS overlord Heinrich Himmler bought the castle before the war and used it to plot his death squad raids.

As the Reich crumbled, he abandoned Wewelsburg and is thought to have stashed more than 9200 silver rings he awarded to members of the SS — which he ordered be returned to the castle after their deaths — in a cave.

Konrad Kienast, 44, a gas company worker, said: “I have been looking for five years. I guess the odds can’t be any longer than playing the lotto. Besides, you get a lot of fresh air and there’s really no danger involved. One day I might get lucky.” 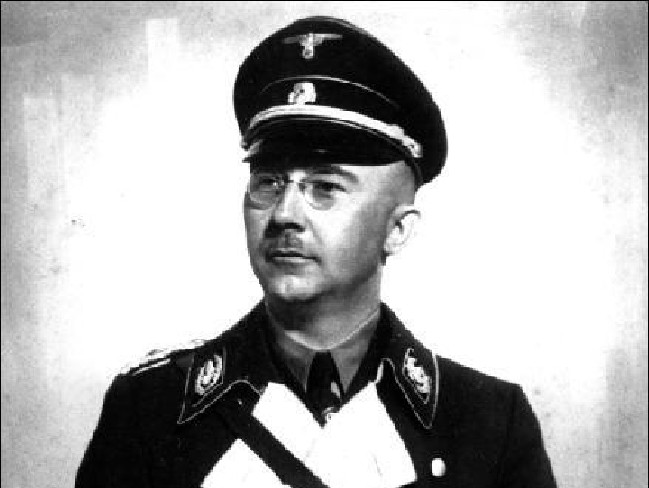 Jonas Valley, in central Germany, is said to have it all. Its centre, the town of Ohrdruf, was home to the S-III Führer HQ.

Treasure hunters believe Adolf Hitler’s atom bomb, the Tsarist Amber Room stolen from a Russian palace, numerous lost art masterpieces and tonnes of Reichsbank gold are waiting to be unearthed in a tunnel system dug into the surrounding mountains.

Americans liberated Ohrdruf and US authorities have since classified all 1945 documents relating to it.

Above and below ground the area is littered with unexploded shells and at weekends authorities play cat-and-mouse with treasure hunters who enter the sealed-off area illegally. 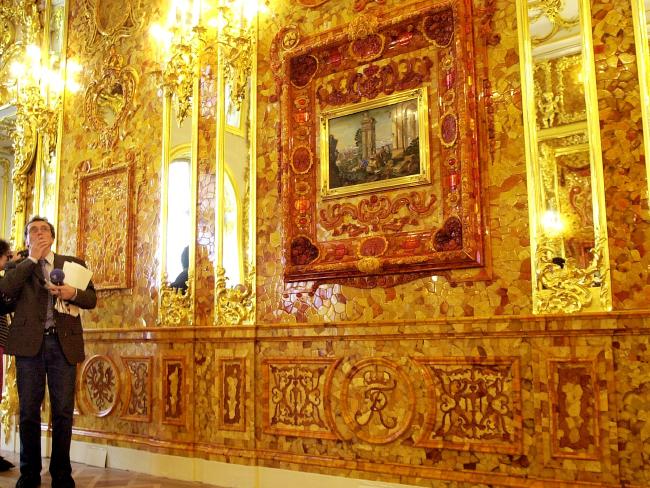 This enormous hoard of gold is rumoured to have been dumped in Lake Walchen. One of the deepest and largest Alpine lakes in Germany, it is located in the countryside near Munich.

Residents reported seeing troops on the shoreline in April 1945, a month before the Third Reich was brought down.

Archive records show SS leader Himmler authorised a convoy of three trucks, with troop escort, to travel in darkness from Berlin to Bavaria at the time the locals recalled seeing the soldiers.

The lake has various ravines around it where hunters concentrate their searches. 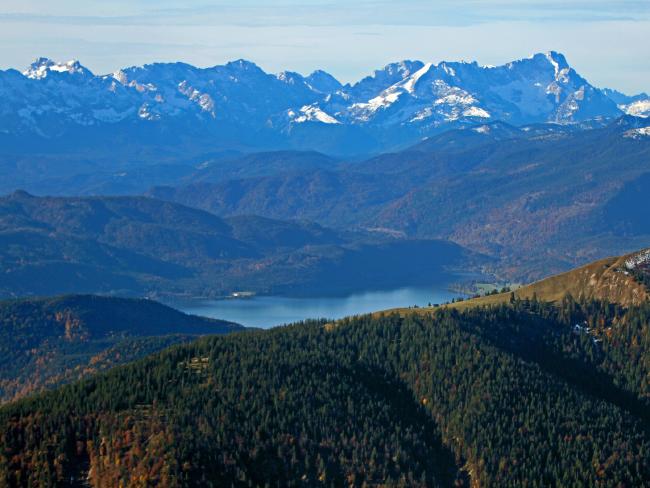 4. THE LUENER LAKE, $84M IN GOLD, JEWELLERY AND STAMPS

Another Alpine lake, the Luener, draws enthusiasts hunting for an estimated $84m worth of treasure. The haul is said to be made up of jewels and gold taken from victims of the Dachau concentration camp and hidden shortly before the camp was liberated in early 1945.

After the war nearly 1200 suspected Nazi war criminals were housed there as the Allies prepared cases against them and they awaited trial.

Wilhelm Gross, a doctor appointed to care for them, reported that an imprisoned SS officer let slip about a fortune in “gold bars, jewellery and rare stamps”. He said it was taken from the camp and buried at the side of the Luener, close to the border with Switzerland.

Dr Edward Greger, a US army intelligence officer, planned an expedition in the early Fifties to find the loot — allegedly buried under an Alpine hut — but by 1956 a new dam in the area caused the water level to increase and all the surrounding land was submerged.

In Bavaria, in southern Germany, Lake Chiemsee has been the focus of many divers ever since a Nazi-themed gold cauldron, worth more than $560,000, was found there in 2001.

Weighing more than 9kg, the cauldron, adorned with mythical Celtic and Indo-Germanic figures, is thought to have been made by a goldsmith on the orders of SS chief Himmler.

Since its find, returning divers have found nothing of value. 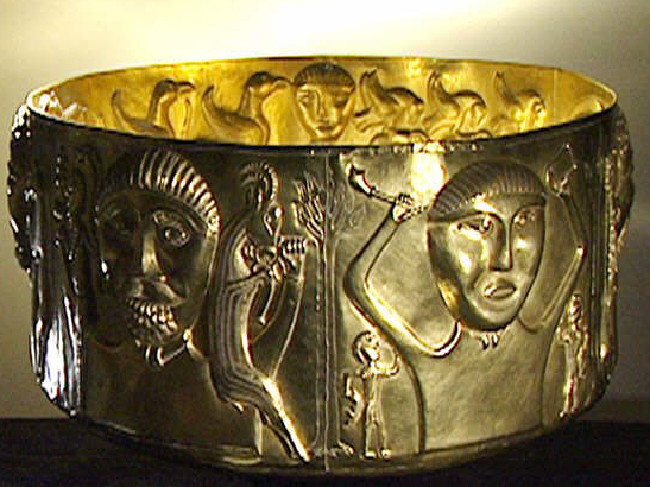 A solid gold cauldron emblazoned with Nazi runes, which could be part of the fabled "Nazi gold" hoard lost in 1945, was found in a Bavarian lake in 2001.Source:News Corp Australia

Across the border in Austria, Lake Toplitz has an enduring allure for the bounty hunters.

Set in dense forest high in the Alps, Toplitz has seen its fair share of death over the years.

Some of those seeking to find $5.6b of Reichsbank gold, said to have been dumped into the water by SS officers, drowned.

In 1959, cases containing $134m in counterfeit British sterling, which Hitler once planned to use to try to destroy the UK economy, were found — but the fabled gold remains elusive. 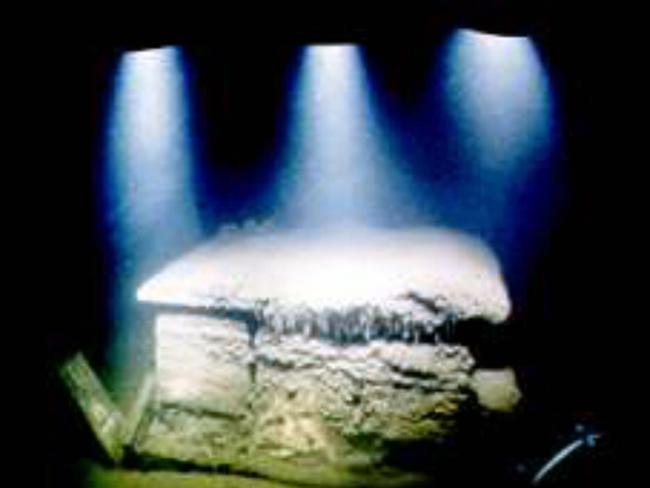 A crate in depths of Lake Toplitz — believed to be of buried treasure thrown into the lake by members of Hitler's secret SS force.Source:News Corp Australia

Masterpieces by Monet, Manet and Cezanne, along with sculptures, carpets and tapestries, are believed to be buried in an old silver mine near the old Czech-German border.

The paintings formed the bulk of the Hatvany collection, the property of Baron Ferenc Hatvany, who was a leading Hungarian-Jewish industrialist and art patron.

Between 250 and 500 pieces were looted on the orders of Holocaust organiser Adolf Eichmann, who was in Hungary in 1944.

Viennese historian Burkhart List said he acquired documents from old Nazi armed forces archives that report a mass shipment of the Hatvany collection to Erzgebirge. He deployed a neutron generator inside the mountain to look for secret chambers. The device suggested some may exist 55m down.

Only a Schmeisser machine gun, gas mask, explosive detonators and a safe deposit key have been recovered.

Mayor Hans-Peter Haustein said: “The question is not what we find here but when we find it. This stuff is here.”

North of Berlin is the so-called Holy Grail for many seekers of Nazi treasure — the ruins of the former art-filled summer home of deputy Führer Hermann Goering.

He ordered his looted art collection to be moved from the house, called Carinhall, as the Red Army closed in during April 1945. He then blew up his estate, including the library, right.

Hunting for the Reichsmarschall’s treasure has been a popular hobby since German reunification in 1990.

During the Cold War the site was sealed off, weeds and wildlife left to reclaim the bunkers and cellars which Goering’s dynamite did not destroy. Almost routinely, bits of old porcelain plates and bowls bearing the Luftwaffe crest are found in the ruins. Three statues were once recovered from Döllnsee lake, which Carinhall overlooked. 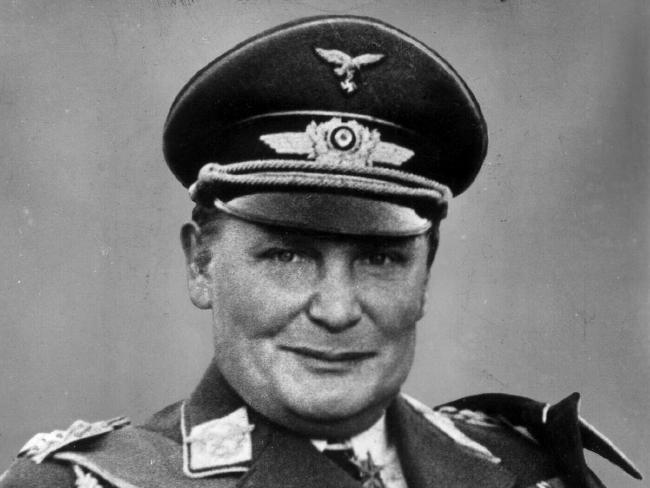 A stash of looted gold said to be worth more than $1b has attracted bounty hunters to Stolpsee, near Berlin.

Legend has it that 18 crates of gold and platinum were dumped by an SS squad on the orders of Hermann Goering and lie in less than 15 metres of water.

In 1986 the Stasi secret police organised dives in a bid to find it then sell it to buy much-needed foreign currency. Their attempt failed.

A German government-backed expedition by an Israeli researcher in 2013 used sonar to locate it beneath heavy sludge but also failed.

According to eyewitness accounts, Polish slave labourers helped the SS dump the gold and were then executed. The search has been reignited after claims by a local priest who was a pastor nearby during the communist regime.

Erich Koehler, 79, said: “The gold is there — and the bodies of the poor souls forced to dump it.”

This story originally appeared on The Sun.