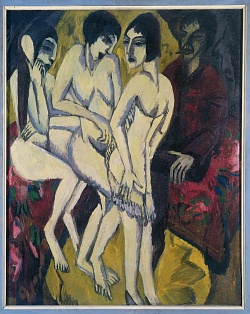 The Wilhelm-Hack-Museum in Ludwigshafen, Germany, is seeking to raise funds to purchase back an Ernst Ludwig Kirchner painting after reaching a settlement with the heir of Alfred Hess, a Jewish shoe-manufacturer whose family was persecuted by the Nazis.

The painting, The Judgement of Paris (1913), is a key Kirchner work and “a jewel in the collection” of the Wilhelm-Hack-Museum, says a statement from the museum.  Provenance research showed that the painting was among several that Tekla Hess, Alfred’s wife, was forced to store in the Cologne Art Association in 1937.

She emigrated to the UK in 1939, joining her son Hans Hess. After the Second World War, the Art Association told her the stored paintings had been destroyed. It later emerged that many of them had been looted from the cellar and resurfaced on the art market—among them The Judgement of Paris, which ended up in the possession of Wilhelm Hack, a Cologne businessman whose art collection led to the foundation of the Ludwigshafen museum.

The two parties agreed that either the museum would purchase the painting at an undisclosed below-market-value price, or, should it fail to raise the funds, return the painting to the heir.

“The city of Ludwigshafen is working intensively to raise funding and is optimistic that the painting will stay,” the statement says. Sponsors so far include the federal Culture Ministry, the chemicals company BASF SE and the Ernst von Siemens art foundation.

The Hess family, who lived in Erfurt, had one of the most comprehensive collections of German Expressionist art when the Nazis came to power, with around 4,000 works by artists including Kirchner, Max Pechstein, Emil Nolde and Paul Klee.

The heir, who lives in the UK, recovered Kirchner’s Street Scene (1913) from the city of Berlin in 2006. It fetched $38 million at a Christie’s sale and is now on show at the Neue Galerie in New York.