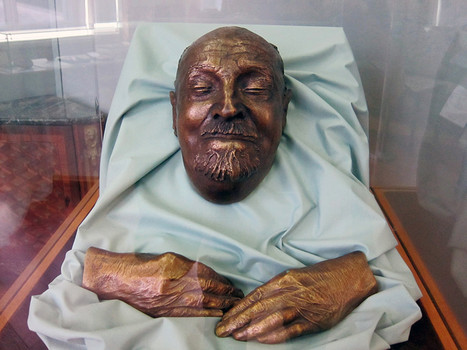 Bronze cast of head and hands of Topic Mimara

Zagreb is the capital city of Croatia. Since its beginnings in 1094 the city has endured Mongol attacks, Hungarian, Ottoman and Austrian Habsburgs occupations and Marshall Joseph Broz Tito, Soviet Yugoslavia Dictator who ruled from 1953 till his death in 1980.

Zagreb was once a stop and layover on the famous Orient Express from Paris to Constantinople. The train station is still evocative of the era.

The Mimara Museum of Zagreb is his legacy. In 1973 he sold his entire collection of 3,600 pieces to the Yugoslavian State in for an annuity of $100,00 a year plus a house in the city and another house at the Croatian coast. The collection included pieces by Goya, Bosch, Rubens, Van Dyck, Raphael, Velazquez and many others. The Museum was promoted as the Zagreb Louvre.

Ante Topic Mimara died in 1986. A year later the Mimara Museum opened its doors to the public.

The state thought they were getting a collection worth billions. However, it was soon discovered that most of the pieces were fakes.

People still try to figure out who was Ante Topic Mimara. Some say he was a peasant farmer’s son named Mirko Maratovic Matutin who added Mimara (Turkish for builder) as his “nom de plume” when he was studying under an Italian portrait painter. Other stories say that he stole the name Ante Topic from a soldier who died he found on the battlefields of World War I.

He told people the collection came from confiscated Nazi loot. He said he was the art adviser and court painter to Hermann Goering and painted a portrait of Hitler for Goering in 1943.

Topic Mimara met Marshall Tito in Paris in the 1930s and probably used this introduction to get into the Allied Control Council in Germany in 1946 as an adviser to the Yugoslav military. Armed with full diplomatic immunity he was able to travel to any country without a passport and collect stolen art.

In 1949 he became the advisor in Restitution Affairs for the Yugoslavian Government, which included restoring art, silver, platinum and zinc to rightful owners. In many cases Mimara just kept the pieces for himself.

During the years of Tito’s Yugoslavia he traveled freely under an Austrian passport, lived much of the time in Tangiers, Morocco and kept his wealth locked up in a Swiss Bank in Zurich.

Even though the Mimara Museum is basically a museum of fakes, it is still a worth the visit. After all, there are 3,600 pieces. The painting are listed as “Radionics” or painted by someone in the style of.

One of the galleries is a tribute to Mimara himself. It contains his personal furniture and in a glass case in the corner of the room are bronze casts of his hands and death mask. He is smiling. Why not?