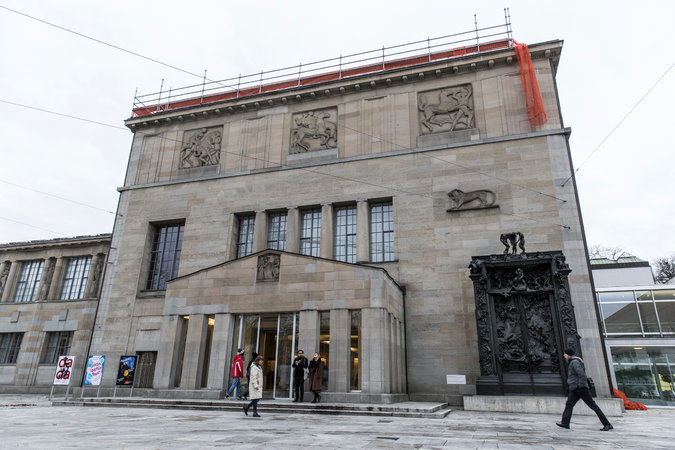 The Kunsthaus in Zurich with Rodin’s “La Porte de l’Enfer” (The Gate of Hell) on the right.

ZURICH — When citizens voted to approve a $208 million expansion of this city’s fine arts museum, the Kunsthaus, they expected it would draw international visitors eager to see its contents: a spectacular collection of French Impressionist works amassed by a Zurich businessman, Emil Georg Bührle.

But since bulldozers started excavation early this year for the massive sandstone rectangle, designed by the architect David Chipperfield, the work has dredged up sensitive issues involving the city’s Jewish history and the Swiss role in the trade of art looted by the Nazis in World War II.

At the urging of a group in Brooklyn, New York, hundreds of Orthodox Jews have staged demonstrations outside Swiss embassies in London, Montreal, New York and Tel Aviv, calling on the museum to protect a 14th-century Jewish burial site that, they say, is under the new building’s construction site.

Other critics are questioning whether it is proper for a publicly financed institution to give prominence to the Bührle collection, given that he was a Nazi arms dealer who bought art that had been looted from Jewish owners. A book about the collection published last year by two Zurich historians, including a former administrator of the Kunsthaus, argues that the museum should be more transparent about his biography.

“We were playing with open cards about the past when the vote took place in 2012,” said Björn Quellenberg, a spokesman for the Kunsthaus. “That was the time to discuss it. No one saw any major obstacle with the fact of the Jewish cemetery” and Bührle’s past was “hotly debated.”

The project, expected to be completed by 2020, is being financed by the city and canton of Zurich and the museum’s association of 21,000 members, who have pledged to raise more than $88 million. The Bührle Foundation, created by descendents to oversee the collection, will contribute an undisclosed amount. 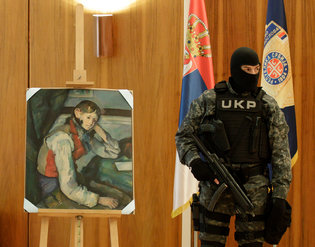 Cézanne’s “Boy in a Red Vest” was stolen in 2008 from the 19th-century villa that housed the foundation’s art collection. It was recovered in Serbia in 2012.

It gained urgency in 2008 when three masked gunmen stormed a 19th-century villa on the edge of Zurich that housed the foundation’s art collection. They fled with four paintings — “Boy in a Red Vest” by Cézanne, a Degas, a van Gogh and a Monet that were valued at $163 million at the time.

“That moment made it quite clear that the house, which had not been built for a museum, was really no longer up to the task of housing a collection of such importance,” said Lukas Gloor, the director of the foundation. Two paintings were recovered within days, but the villa was closed except by appointment. Investigators recovered the two missing paintings, including the Cézanne, in 2012 in Belgrade, Serbia, in an undercover sting operation, with the lure of a million euro reward.

The expansion was approved by voters in 2012, and the foundation pledged to loan about 200 works until 2034 on condition that they would be displayed together in the new wing.

But despite this broad show of support, the new building has exposed divisions. Leaders of Zurich’s Jewish community are bristling at the demonstrations abroad by the Orthodox rabbis, who in turn contend that those leaders are too intimidated to challenge the museum project.

“We are not here to stop their project, but to work with them,” said one of the protest organizers, Rabbi David Niederman, the director of the United Jewish Organizations of Williamsburg and North Brooklyn. “At the same time, do not desecrate the memory of our holy places.” Rabbi Neiderman, who is also the chairman of Asra Kadisha, a cemetery protection society that cites old Zurich maps as evidence, added: “We have seen the bulldozers over there and they have been indiscriminately doing work, going really deep down. How can you see what you are destroying in the process?” Asra Kadisha has commissioned a book on the cemetery, and is composing a prayer of mourning to be read aloud at synagogues.

No one disputes that there was a Jewish quarter marked on the old maps. But city officials say they have uncovered only remnants of a 16th-century city wall. Urs Spinner, a spokesman for the city’s engineering department, said the construction crew had searched for a burial site by drilling a circle of almost the entire terrain with holes every 10 feet at depths up to 164 feet.

“That’s why it is almost certain that there is no Jewish cemetery anymore,” Mr. Spinner said. “The Jewish communities in Zurich with their rabbis are working closely with the local authorities. The protests are grounded in false information floating around.”

Three orthodox rabbis from Zurich have issued a blunt public letter in Hebrew, saying that the cemetery search is a local matter and that outsiders should not “meddle” in it.

“From our point of view, nothing was found so there is no reason to protest,” said Jonathan Kreutner, the secretary general of the Swiss Federation of Jewish Communities. “They don’t know that the city is very open and that all of the Jewish communities are involved in this issue. They don’t know the facts. This is a very marginal group within the ultra-Orthodox Judaism.”

The Swiss federation is also wrestling with the implications of displaying the Bührle collection. The Kunsthaus sells a slim book published by the foundation that notes that Bührle, who died in 1956, was forced by a Swiss court to return 13 looted artworks that he had bought during the war to their owners or descendents. He later bought back nine of them, including a Degas that had once been in the possession of Hermann Göring.

In August, Guido Magnaguagno, a former vice-director of the Kunsthaus, and Thomas Buomberger, an art historian, published “Bührle’s Black Book,” in which they argue that the museum should be more open about the entire Bührle collection of some 600 works and its history.

Around 300 works are privately owned by his three grandchildren rather than the foundation.

“It’s obvious that the very difficult paintings remain in the private collection,” Mr. Magnaguagno said. To avoid glorifying Bürhle, he argues that the museum should create a documentary room in the new wing that candidly chronicles his wartime activities.

Last month, the Swiss Jewish federation revisited those issues, hosting a lecture on looted art at the Kunsthaus by Ronald Lauder, the president of the World Jewish Congress. While there Mr. Lauder also raised questions about the Bührle collections. “One is publicly accessible, the other is private,” Mr. Lauder said. “We don’t know what’s included in the private collection.”

Mr. Quellenberg, the museum spokesman, said the Kunsthaus and the foundation were preparing a new biography of Bührle that would explore his past, which would also be explained in audio tours. The museum will also house all of Bührle’s archives, he said, but there are no plans for a documentary center. “We are not a historical museum,” he said.

The Bührle foundation is preparing a catalogue of all the works — private and public, said Mr. Gloor, its director. He said he believed that the new wing could ultimately improve the arms dealer’s image because he collected most of his works after the war, in the six years before his death. “It might, in fact, bring him forward as the collector he was — independently of the 13 works that unfortunately turned out to be looted,” Mr. Gloor said. “I strongly believe that as time goes by that it will come out that he was a much more complex man.”